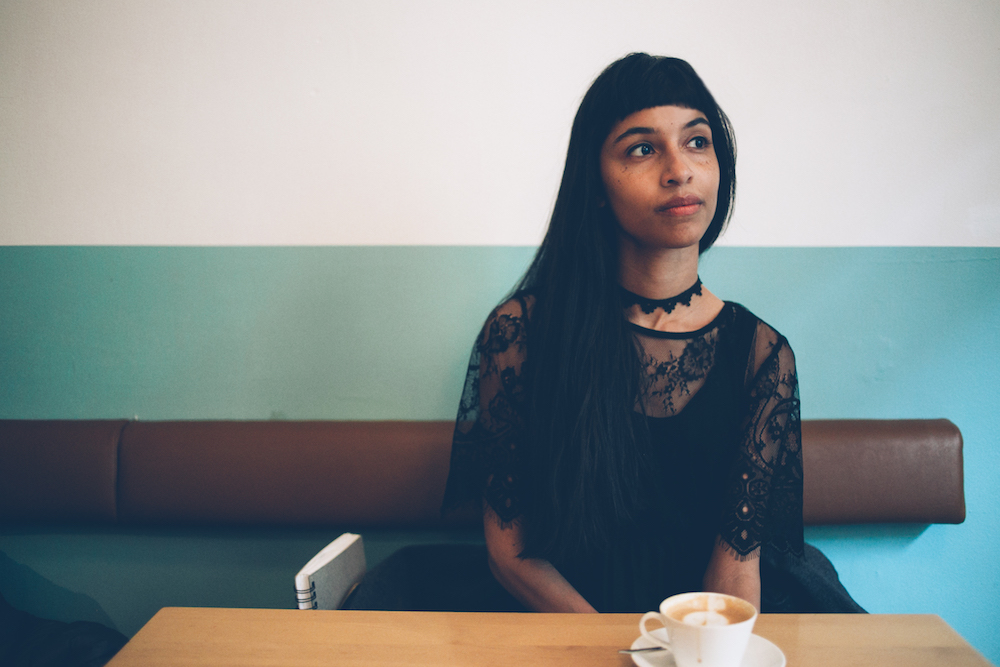 Stephanie Singleton is a Canadian artist living in Sweden. Before moving to Stockholm, Stephanie had lived in Toronto all her life. She grew up in her family's home located just outside of an enormous nature reserve, and her resulting fascination with the natural world fostered early interests in science and art. Stephanie's parents thought she might become a scientist, but instead she became an artist whose work reflects the beauty of nature. Recently she even illustrated a science article about microbiology and climate change, taking a pause at that moment in her career to reflect on how her childhood passions of science and art had come together. "I don't think I would have imagined that as a child," she said.
Creativity has always been an important aspect of her life. "I've been drawing pretty much as young as I can remember," said Stephanie. This led her to art school at OCAD University, where she began studying graphic design. "I didn't think that illustration was a feasible career, so I thought that being a graphic designer would be more practical," she explained. But Stephanie soon changed her mind, encouraged by an instructor to switch majors from graphic design to illustration. At first the art school experience was stressful for her because she felt directionless, unsure of what to do or where to go. "It was only really once I graduated that I figured out what direction I wanted to go in with my art," Stephanie said. 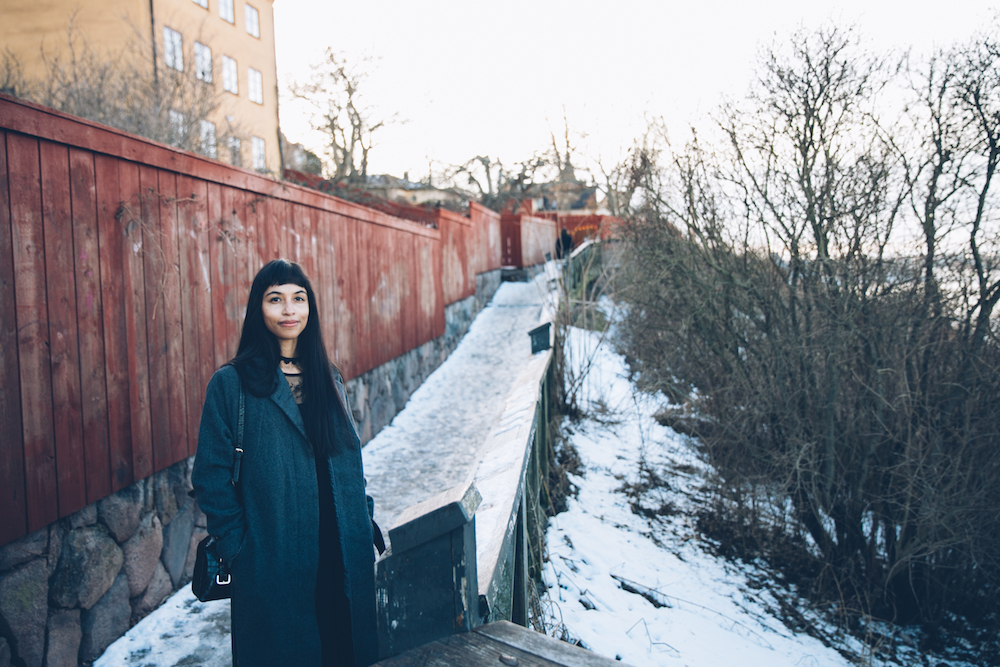 Fresh out of school, she began to develop an artistic style focusing on nature, organic objects, surrealism and patterns. Stephanie also focuses on her use of color, which is now an important aspect of her style after a long struggle to develop the ability while in art school. "I did not know what I was doing. I hated using color, and now it's one of the most important things to me," said Stephanie. Working digitally helped her develop those abilities; her work is created using both digital and traditional mediums. "It's half and half," she said. "I always use Photoshop to add color, and I always do my line work and the watercolor textures by hand." The result comes together using a distinct color palette that Stephanie described as "kind of bold, kind of candy-colored and a lot of pastels as well." She developed it organically by simply picking and choosing colors that she found aesthetically pleasing, then using color theory to bring in additional complementary colors. 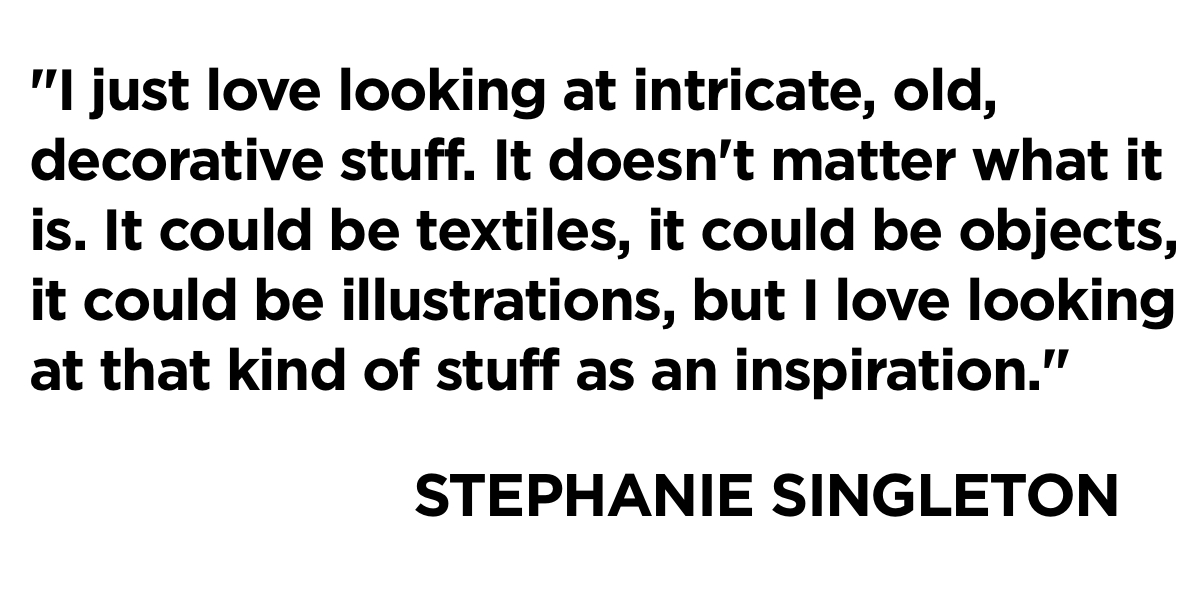 The surreal side of Stephanie's work is often inspired by looking at photography and old botanical illustrations. "I just love looking at intricate, old, decorative stuff. It doesn't matter what it is. It could be textiles, it could be objects, it could be illustrations, but I love looking at that kind of stuff as an inspiration." Sometimes, Stephanie is inspired by family memories. Her print Childhood Fruit and Spices recalls familiar foods from her upbringing, like papaya and breadfruit. "My mom is West Indian and that was the kind of food we grew up eating and cooking," she said. Stephanie also enjoys portraiture. "I think it's quite fun when you study a person for so long. It's kind of weird when you break the pieces of their face down into certain angles or shapes. I think that's pretty interesting to do." 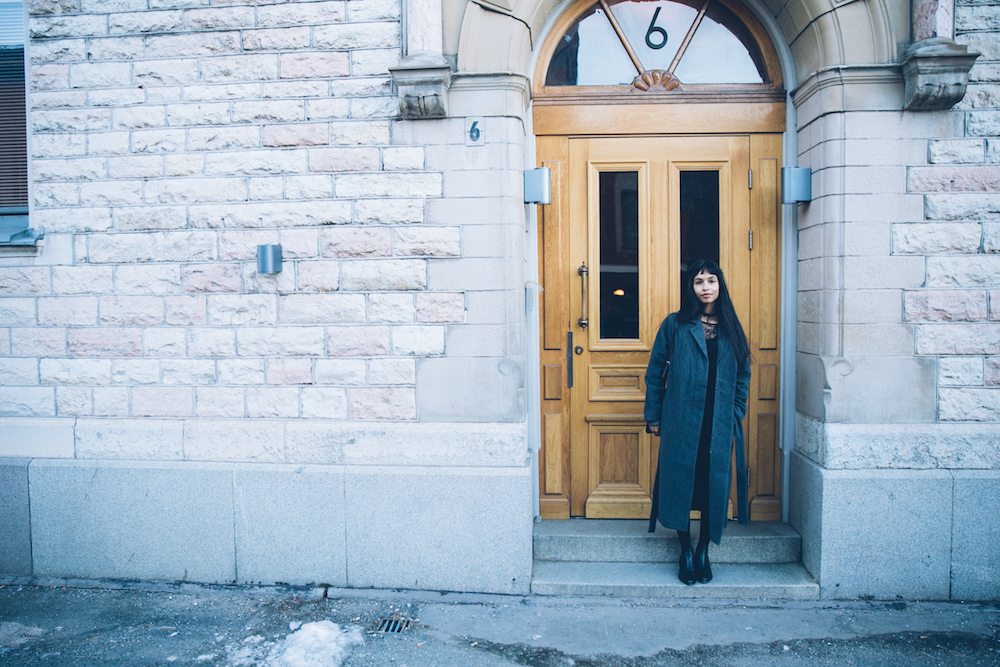 As her style developed, Stephanie also began to establish a working routine. When she is not making personal work, she works full-time as a freelance artist. "I'll do sketches first, to either get those approved or do revisions, and then move onto the final, which will be me working traditionally making the lines by hand and then scanning into the computer and then coloring with Photoshop," she said. "Usually I'll wake up maybe around 10 or so. I'll have a cup of coffee and just think for a bit, kind of get my mind clear." From there Stephanie usually works in one of Stockholm's cafés or the library before coming home to make dinner.
She decided to move to the city after visiting a couple of times. Stephanie realized that she really liked Sweden, and she had been feeling stuck in a rut at home in Toronto. "I kind of decided I liked the feel of the country, so I came back to Stockholm," she said, explaining that it was a simple process to obtain a working holiday visa in Scandinavia. "It's really great, I wish I could stay here. It's just a really beautiful city. It's really inspiring because everything is so well-designed and it's near the water and there's a lot of nature around and the buildings are just beautiful." 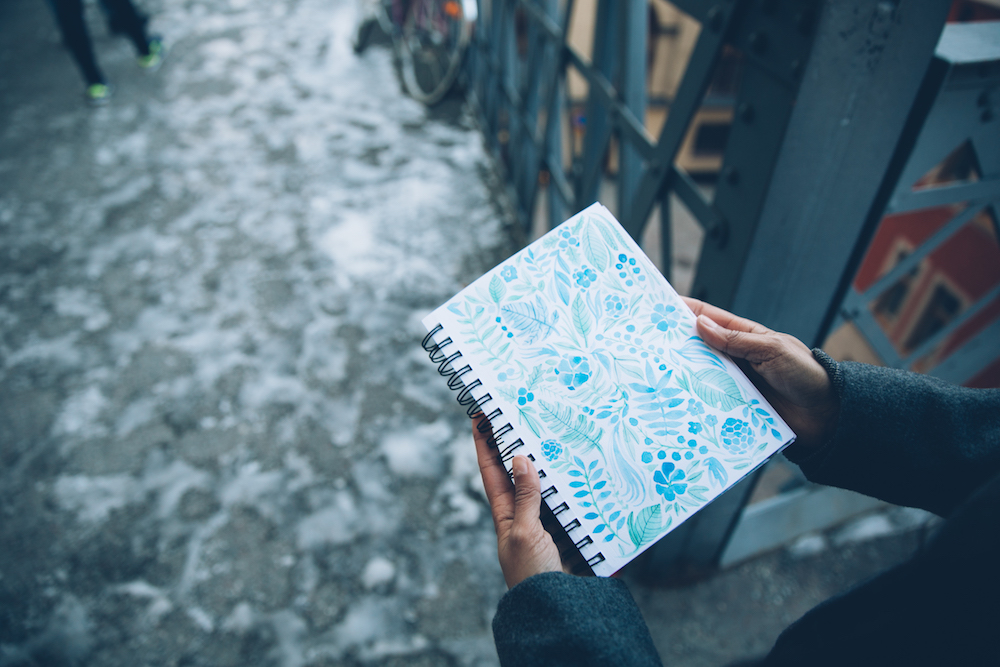 The move has helped Stephanie grow both personally and professionally. Before moving to Sweden, Stephanie made art on a part-time basis while working her day job in a library in Toronto. "I basically quit my job and moved here [to Stockholm] and I didn't think that I was going to be able to work full-time freelance as an illustrator, so that was kind of a surprise for me." She quickly developed the business skills needed for freelancing. "Working as a professional artist, you have to do all these different things that you wouldn't think of," she said, from invoicing clients to generating self-promotion. Being your own boss can be both a blessing and a curse because of the immense responsibility involved, she said. All of the effort is well worth it, though. She said that the best part of working full-time as an artist is "doing what you love to do and also being able to make your own schedule."
Print services like INPRNT can be a big help. Stephanie originally experimented with printmaking, but found that she did not enjoy doing it herself. "I tried to make prints on my own very briefly when I just got out of school and I really hated the whole process with it, and just the fact that there was a service that I could use that had good quality prints and did all the stuff for me was amazing. When I saw the prints for the first time I was really impressed with how well the color was matched." 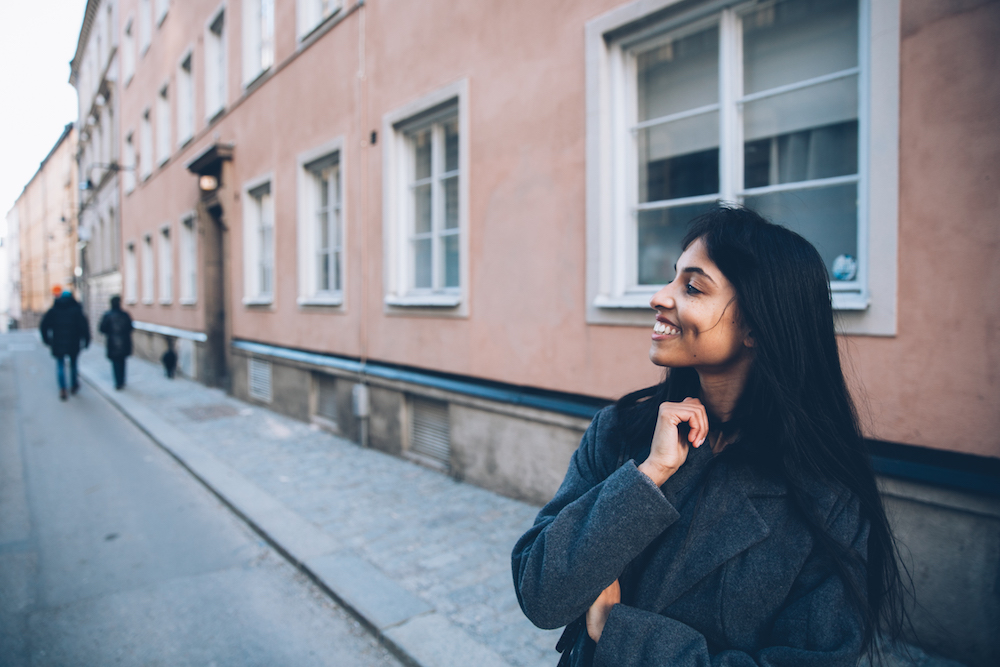 Culturally, Stephanie has not found Sweden to be drastically different from her native Canada, and since nearly everyone speaks English there is almost no language barrier. Geographically, she appreciates how compact and well-designed Stockholm is compared to Toronto. Even living in the outskirts of Stockholm, it only takes up to twenty minutes to get anywhere she wants to go. She acknowledged her favorite things about each city, saying, "I think the best thing about Toronto is how diverse it is, how multicultural... and then Stockholm, I would say I think it's just a very visually inspiring city." Stephanie plans to put that inspiration to use in the future by collaborating with a friend on a series of Stockholm-themed patterns.
She met with our photographer at Monteliusvägen, a scenic path with extraordinary views. "Someone brought me there the first time I went to Stockholm and I thought it was so beautiful," she said. Stephanie appreciates how much other people enjoy the city's beauty, too. "I love the fact that when there is even a speck of sunshine, everyone is outside just hanging out in the park." 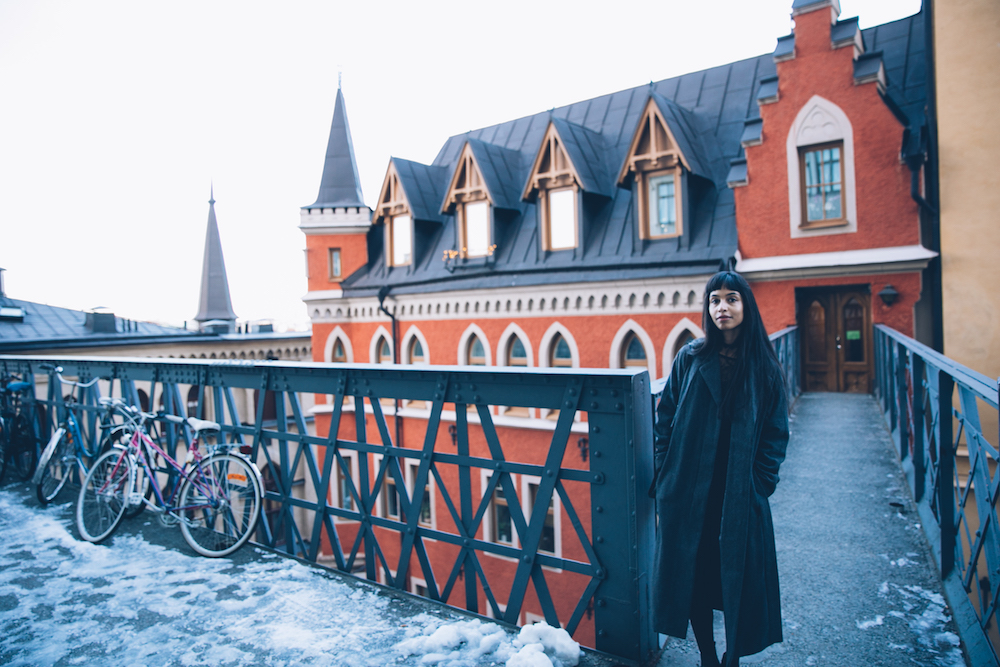 Photography by Ashley Heafy
Stephanie credits her family with encouraging her to pursue art. Her mother was an accountant and her father worked in IT, but they consistently supported their children in creative pursuits. "They've always been really big on supporting me through that and I think that's really helped me. I know I'm very lucky for that, because a lot of people don't have that kind of support," she acknowledged. Stephanie's sister works in film and video, and she has been living in Berlin during Stephanie's time in Stockholm. They even left Toronto on the same day. "It's been pretty amazing," said Stephanie. "I think this year has probably been one of the best in my life."