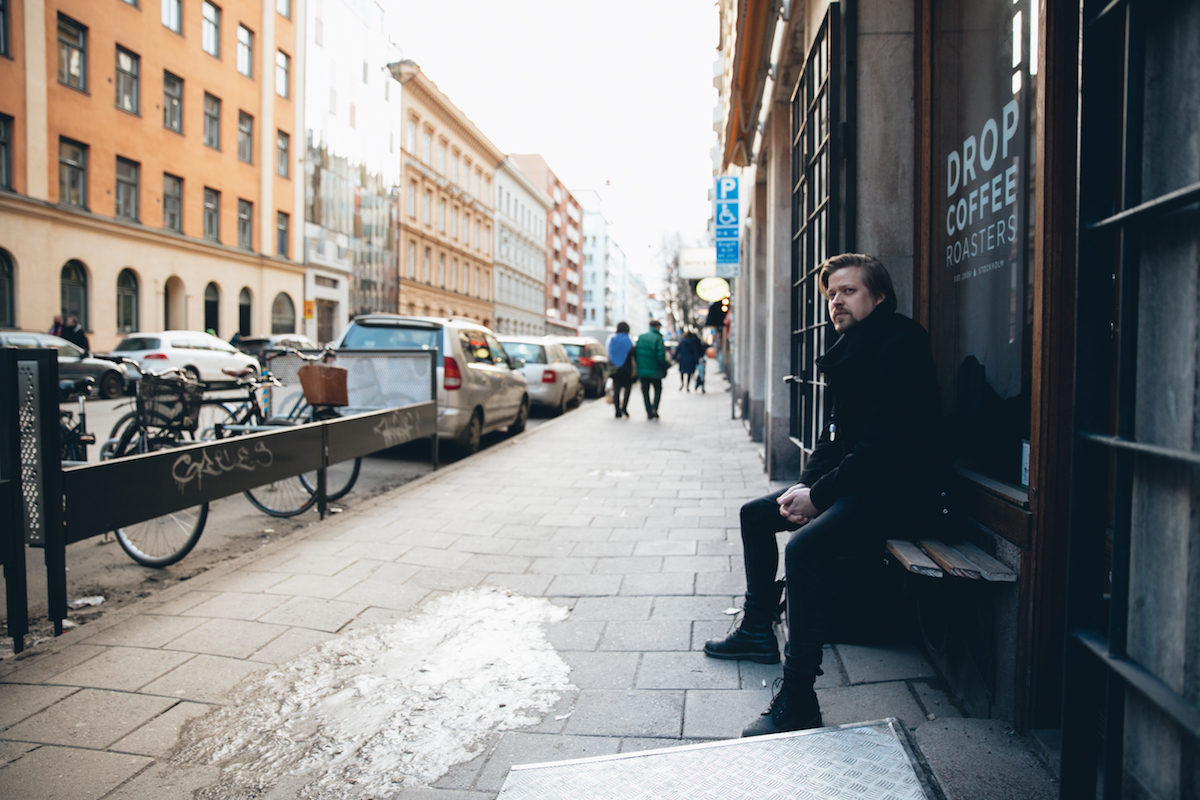 Robert Sammelin likes to borrow a word that his wife often uses to describe his artwork: funky. He thinks of it as a quality-assurance test. If she looks at one of his pieces and says it has funk, then he knows it’s good.

He and his wife share the same hometown in Sweden, located above the Arctic circle. It is perpetually dark there nine months out of the year, and perpetually bright during summer when the sun never sets. The couple eventually moved to Stockholm, where they now live and where Robert developed his skills without any formal training and having never attended art school. He has been drawing constantly since he was a kid, resulting in what he called “a mishmash, a hodgepodge” of the multitude of influences he has absorbed over the years, including comic books, movies, music and fashion.

Robert landed on his current trademark style in his late teens. Years later, he’s well known around the world for his work that he thinks of as slightly subversive, kind of a play on gender stereotypes. Many of his subjects are strong women who ride motorcycles or tote large weapons. As for his technique, a surgery on his wrist helped him discover a new favorite medium that helped him grow as an artist. He started using brushes more often because of physical limitations after the operation. He said that at that point, everything just clicked. 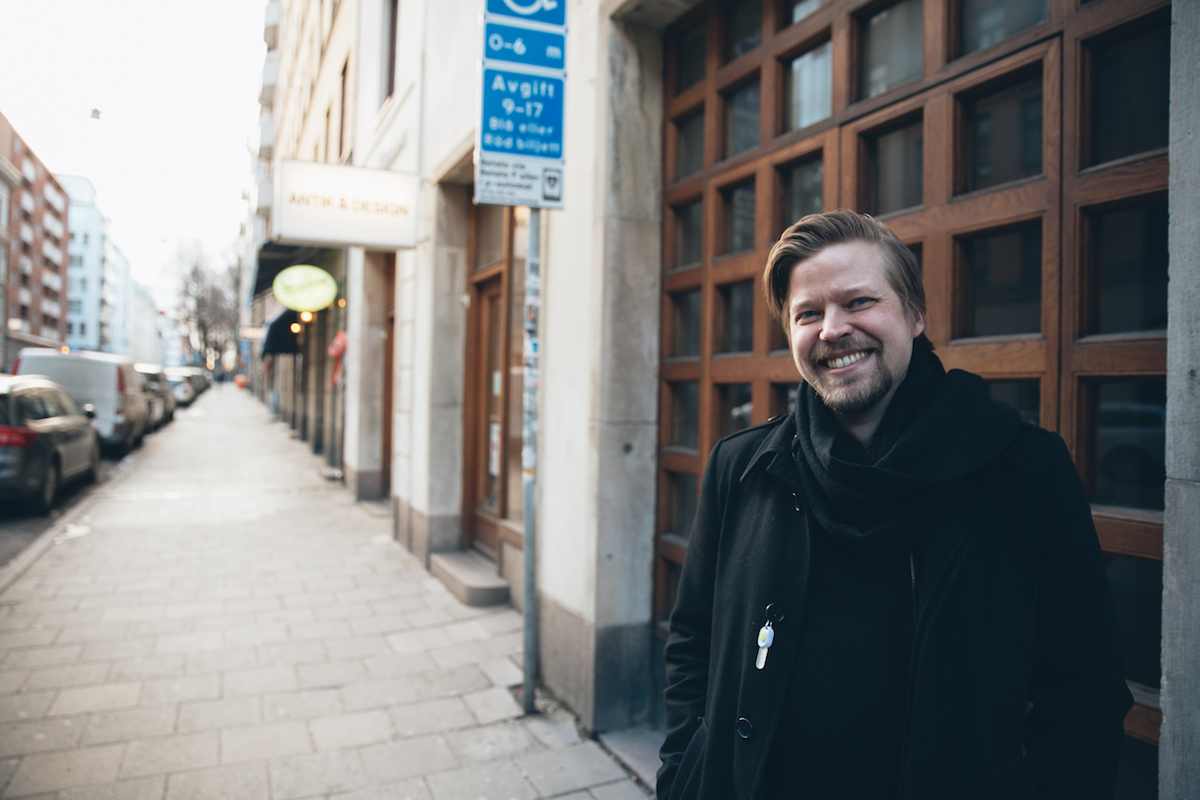 Today Robert still likes to base his personal work around traditional mediums like ink, though he often adds color digitally. “I like to mix things up and experiment,” he said. After choosing a medium to work with, Robert simply lets loose and has fun by allowing his subconscious to take over. A fan of comics since childhood, he likes to think of each of his works as a story, building a plot and a world behind each image. He lets his hand just work its way around the page while soaking up his surroundings and conversations with family.

One of his favorite past projects is his collection of mock horror movie posters. The one titled Mutantiliation was inspired by his son, who mashed up the words “mutant” and “mutilation” to come up with the name and concept. The youngster served as art director for the piece, asking Robert to include zombies, “a guy with forks for teeth” and burning cities across an apocalyptic landscape. He also told his dad, “You can draw a cool lady, because I know you like those!” 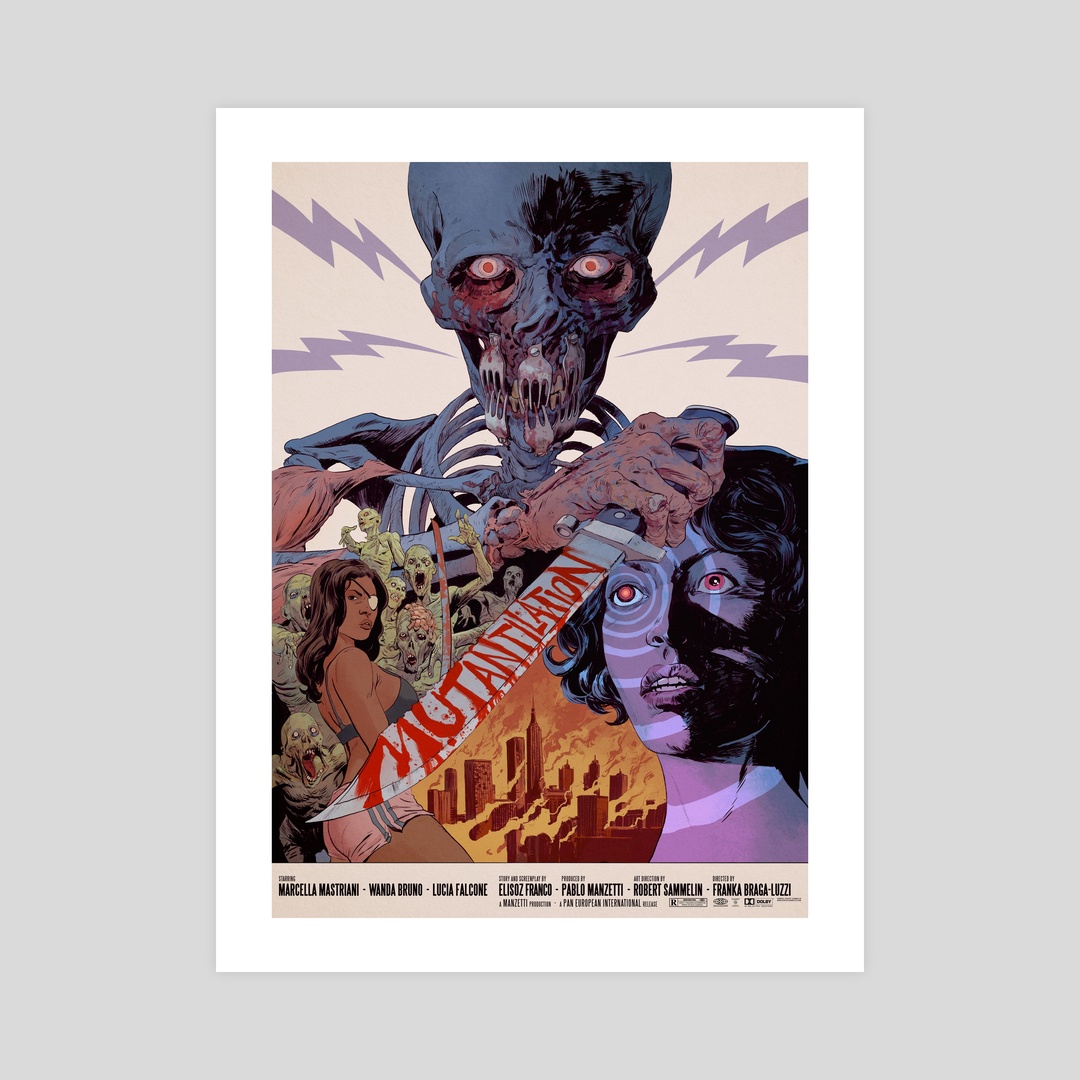 Powerful women are among Robert’s favorite subjects, fueled by a desire to portray something different from the drawings he saw when he was growing up. He said that back then it was like “he is always strong, and she is always at his feet.” He never liked that disparity. That’s why today he wants to turn those ideas around in his art. “It’s important to me, and it becomes more important as people take note of it,” he said. He appreciates watching social changes unfolding and awareness increasing over the years, especially as a father raising a child, and he credits the strong women in his life for inspiring him daily. 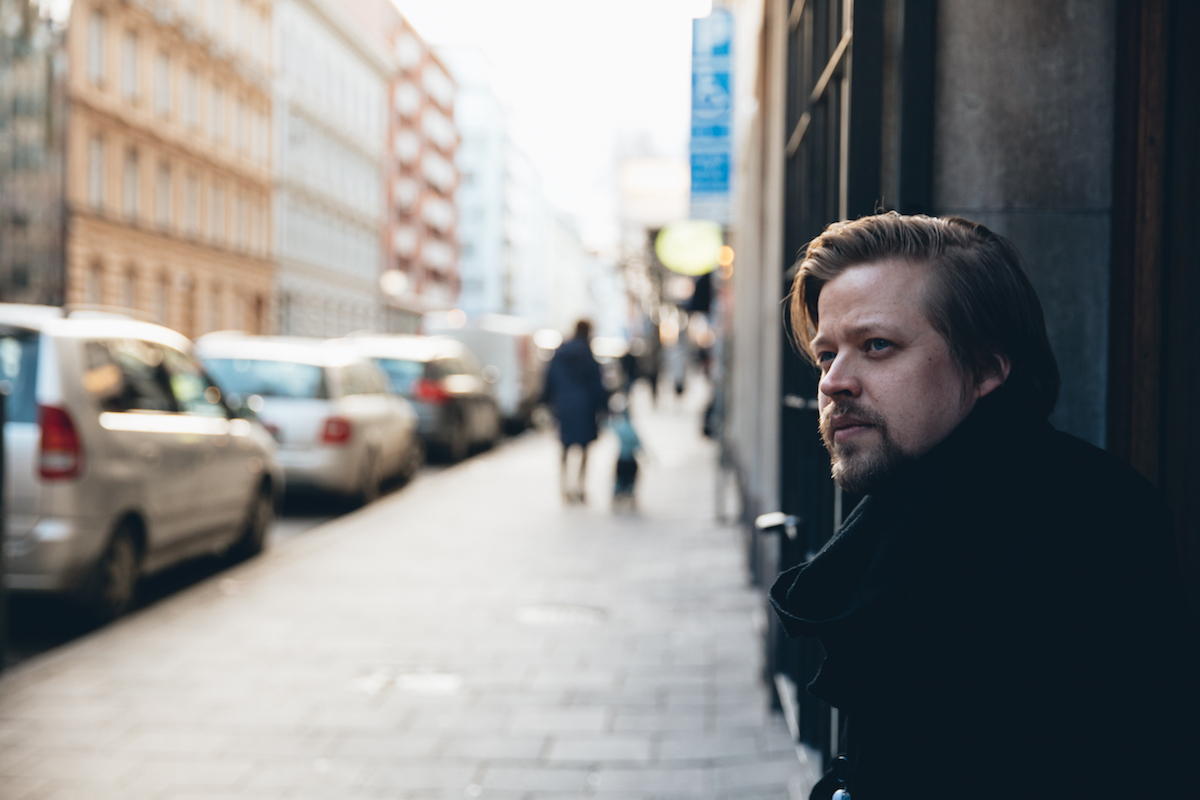 Robert also likes to choose subjects that are technically difficult and challenging to draw, from mechanical objects to architecture. That’s how he started drawing one of his favorite subjects: vehicles, especially motorcycles. He thinks of motorcycles as a sort of modern horse and believes they represent nostalgia, freedom and a tantalizing subculture. However, these days he finds himself drawing fewer vehicles and focusing more on complex architecture, though he has not published many of his architectural pieces to the public. 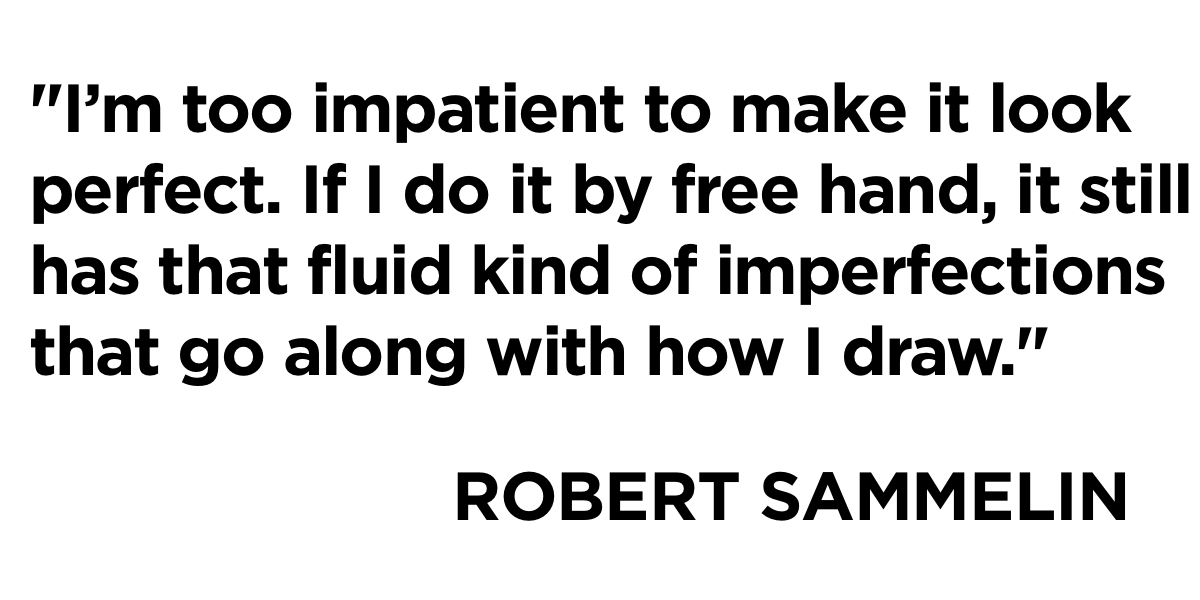 His interest in architecture is an extension of his day job in video games, where he works with 3D environments. Robert enjoys the polish and realism that he and his team work toward in their games, but also likes experimenting with personal work where his subjects can be “a bit wonky, a bit off. That adds to the fun factor of it.” So he chooses not to use tools like rulers when drawing because they tend to take away some of that uniqueness. “I’m too impatient to make it look perfect. If I do it by free hand, it still has that fluid kind of imperfections that go along with how I draw,” he said. The one time he does use a ruler? To draw the panels of his comics.

He is currently working on series of comic books in collaboration with a writer friend. For this work, titled The Kali, Robert has chosen to use a signature color palette with a foundation of reds, blues and purples. He’s also updating the way he uses digital color, adding texture as a way to make it feel more real. “I think I mimic what it would look like if I was actually to color it on paper,“ he said. He has been working on The Kali in his spare time, and when it’s finished they expect to have five issues. Robert works on personal projects like this one at night and on weekends. 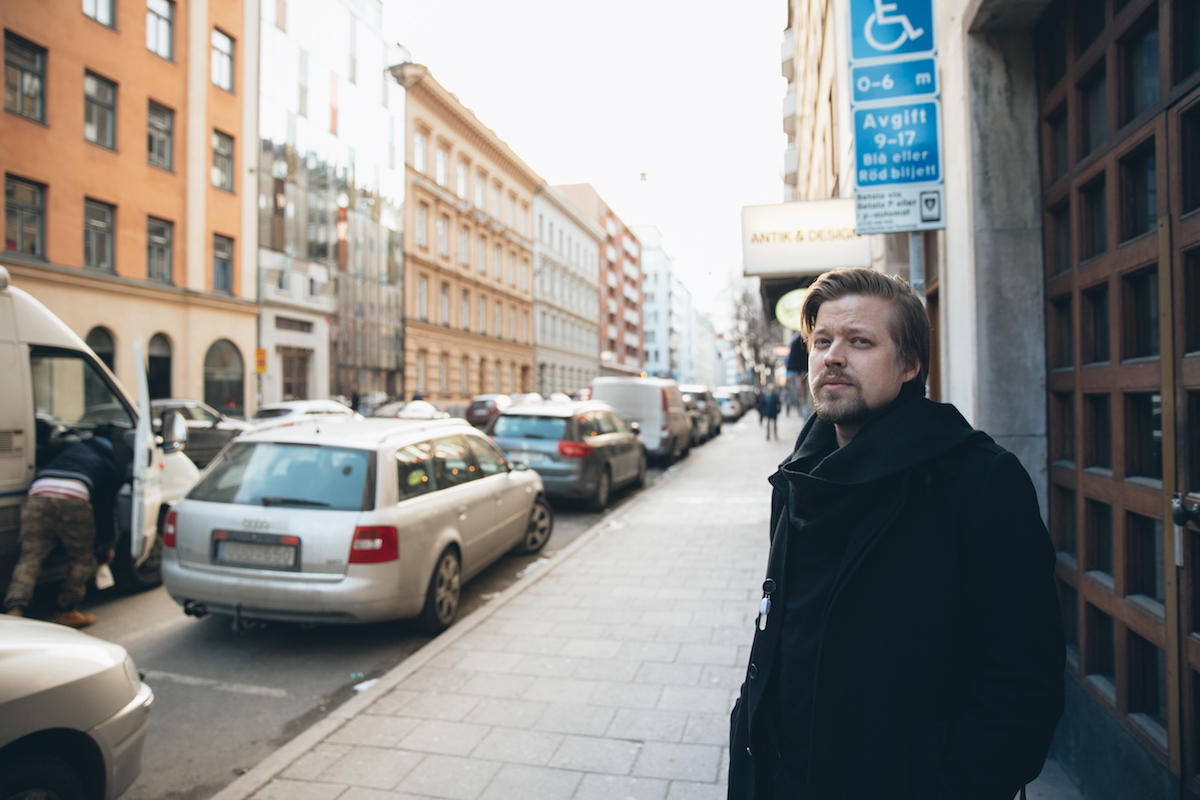 “It becomes deeply personal, the things I do in my spare time,” he said. The work he does for fun is very different from what he does as a concept art director, managing a team that works collaboratively on large video game projects. “Predominantly we make action games, shooter games, these kinds of titles that are blockbuster, mainstream things,” he said. So when he has free time, he takes the opportunity to make artwork in his own style. After a long day, Robert comes home to make dinner and enjoy time with his family. He’ll usually draw for three hours before going to bed.

“My whole life revolves around drawing, it seems.” He said it helps that the work he does at home is so different from what he does at the office because he feels he is getting the best of both worlds. With a busy career as an art director and his free time devoted to personal artwork, Robert relies on INPRNT to create beautiful prints of his work. “I was immensely impressed with the quality,” he said.

One thing Robert does not do is use a sketchbook. “I ruin mine instantly,” he explained. Taking a more relaxed approach, he prefers to get his ideas down on a single piece of paper as quickly as possible—just a loose framework in pencil. He gave the example of a musket combined with an axe as something that might pop into his head that he would feel compelled to draw in the moment. “I try not to overthink anything. I do most of it just because it’s fun, and I do sort of whatever pops in my head, but I always want to try and twist it.” 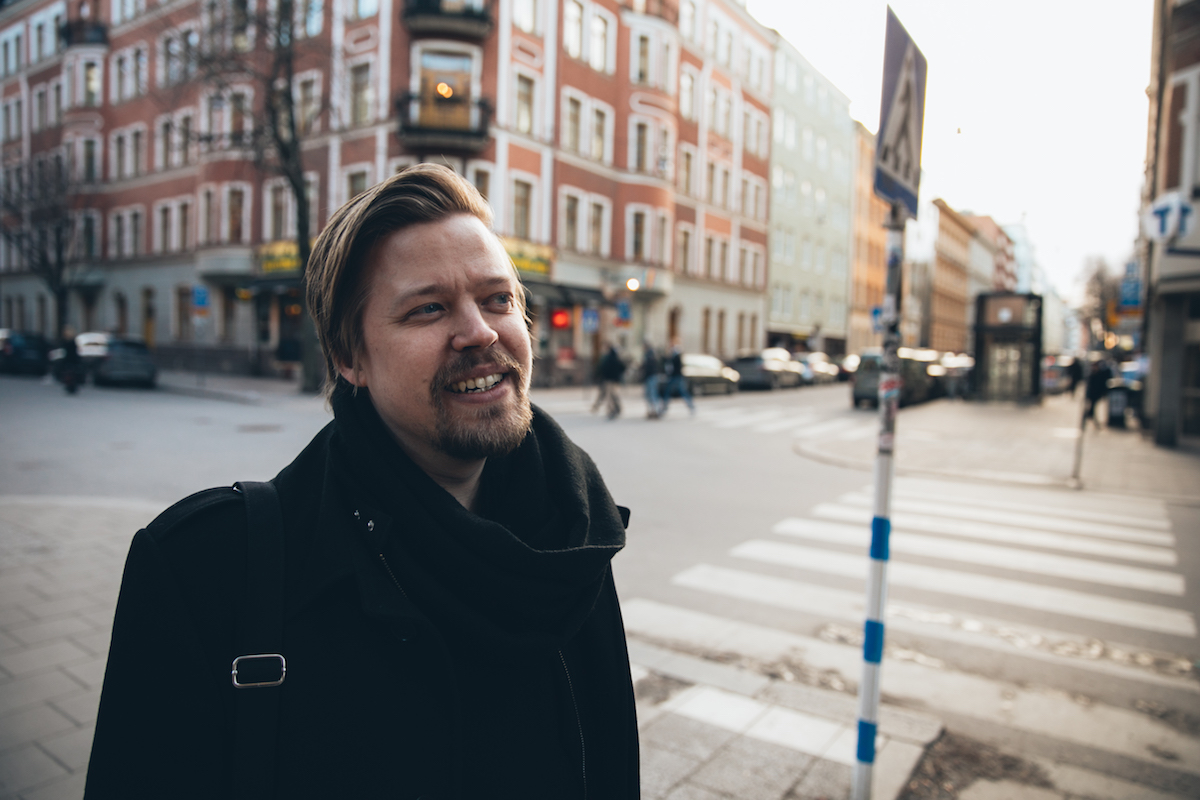 Robert has had his current job in the video game industry for over a decade. Previously he worked all kinds of jobs, from train conductor to teacher to record shop manager. Meanwhile, he was teaching himself art without any outside help due to a stubborn streak he said he inherited from his family. As a teen, he decided that he would teach himself to draw so that if he became really great one day then nobody else could ever say, “I taught him everything he knows.” But by working various jobs and only drawing on the side, he found his career going nowhere.

So he stopped drawing entirely for five years. “I didn’t touch a pen or anything. I just got fed up with it not heading anywhere.” He said it eventually led to a breakdown. That’s when he quit all of his other jobs and suddenly resumed furiously drawing. He wanted to follow his dream. “It was probably the scariest thing I’ve ever done,” he said. “My wife just said, you used to be really good at this, why not give it a go?” So Robert put together a portfolio of concept art, then landed a job in video games.

As an art director, Robert follows one simple rule of leadership: “If everything goes really well, it’s the team’s credit; if it goes to hell, it’s my fault.” This gives his team a sense of security and makes them feel more comfortable trying new things, taking risks and experimenting. Robert is responsible for leading the group as well as hiring them, having handpicked most of the artists he works with. “I have a really great team that inspires and spurs each other on. I am far from the best painter in that group, I’m far from the best illustrator, but the reason I am where I am is that I have a drive, a will to just move forward and really think about things.” 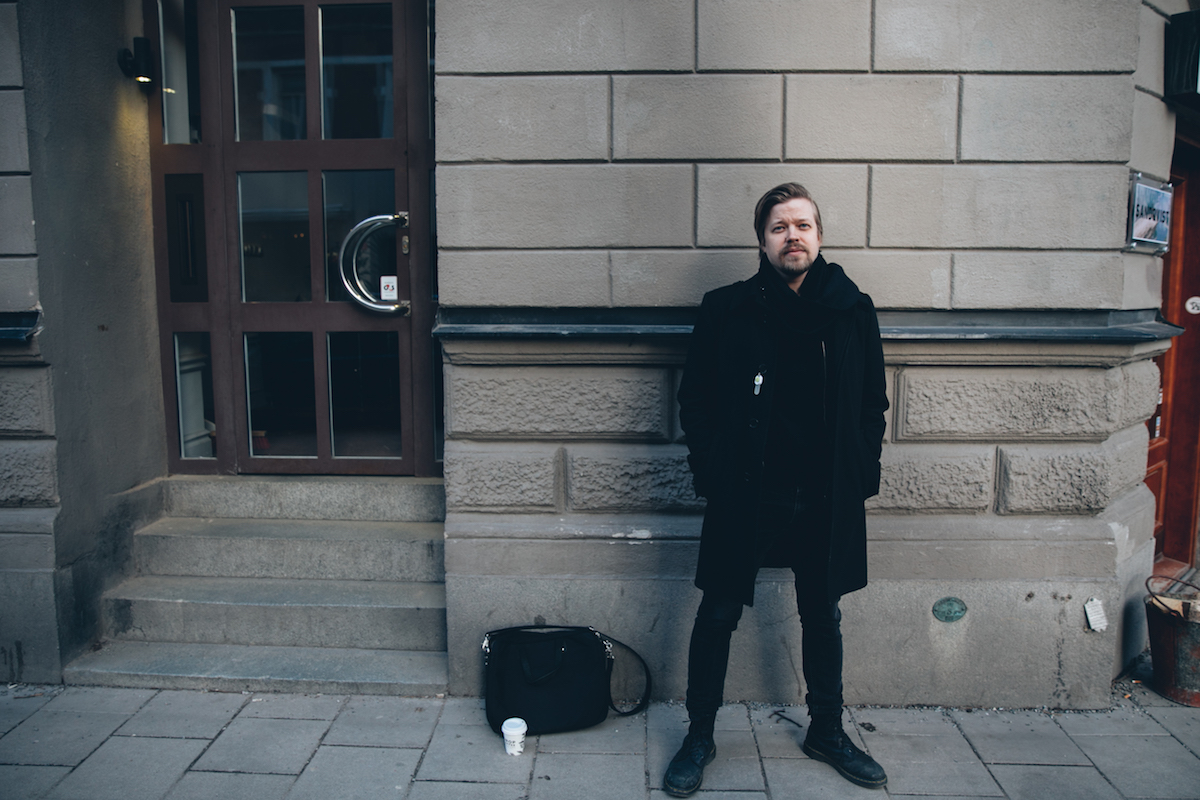 Robert said revising or redrawing old work is one way he likes to practice, along with seeking outside influences for unexpected inspiration. “It’s the nature of the entertainment industry to be super derivative, and that’s why I try to always encourage myself to do the opposite. At least you will find an edge that you don’t see somewhere else.” That’s one reason he loves fashion and music as sources of inspiration. “Leafing through fashion magazines while listening to punk rock is super interesting, because every once in a while a phrase or word will pop up, and you’re looking at a weird polkadot dress, and you can sort of mix and match those around.”

His style may be inspired by a blend of influences, but the result is uniquely his own. “I truly can’t stop drawing. I think that’s the thing,” said Robert. At home or at work, listening to punk records or watching an old horror movie, he is always creating freely. “That’s my job. My job is to hold a pen.”