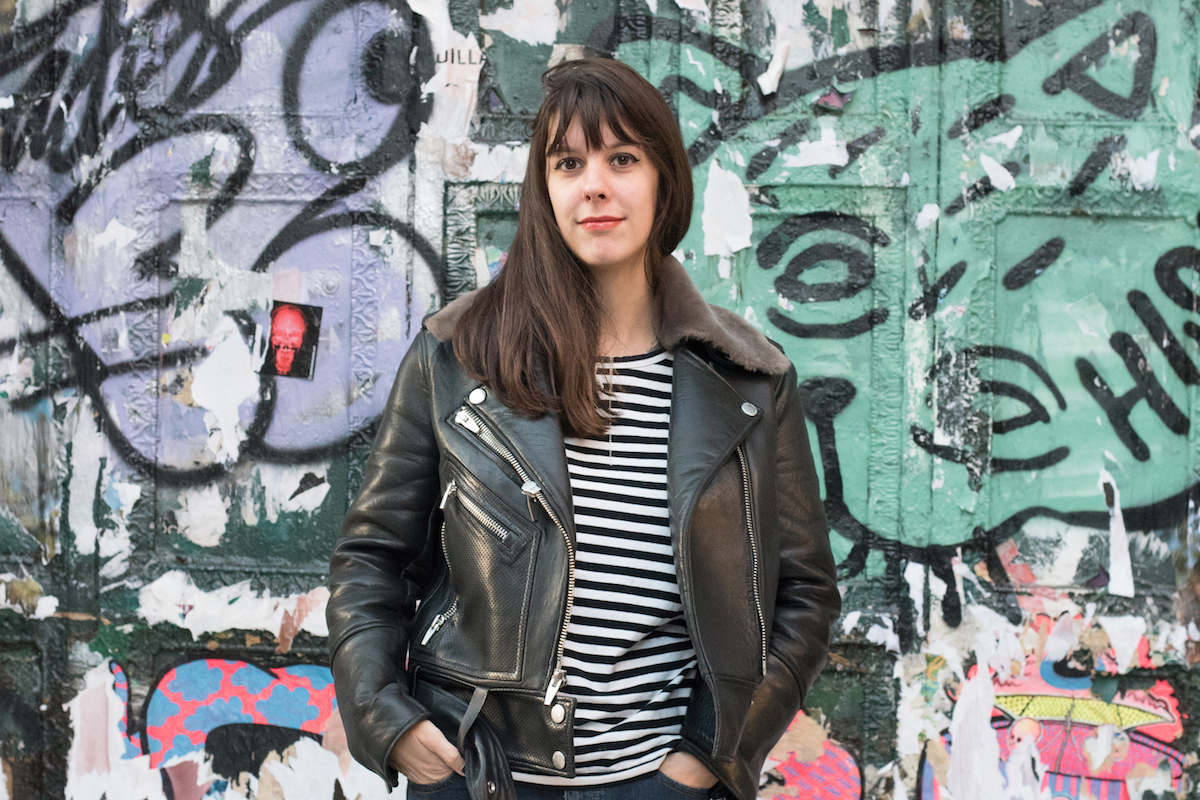 Rachel Merrill grew up in Louisiana, where she never quite felt like she fit in at her school. The art department was underfunded, and female students seemed to receive unfair treatment from school administrators. These days, she she has finally found a place to call home. It has been a long journey that started with Rachel attending art school in Florida before eventually moving to New York and getting to know other creative people to whom she can relate.

Although she was creative from a young age, her early passions were ballet and acting. She eventually lost interest in both, but her mother encouraged her to find something else to pursue. “I did ballet for 11 years and I did acting for almost 10, and I kind of burnt out on them in high school,” she said. “My mom was like, you can’t just sit at home and watch cartoons all day, which is what I wanted to do. So I started drawing, which is a lot easier on my feet! And that’s kind of how I ended up going into visual arts.”

She has been a practicing artist since she was a teenager, taking her first serious steps toward becoming an illustrator at the age of 17 when she attended Pratt’s summer pre-college program in Brooklyn, New York. “My buddies and I, we would just ride the subway and get lost in the city. It was an amazing experience. In most of the South, it’s not pedestrian friendly. I was not used to being in a place where you could just walk everywhere. Just being on the street was amazing for me, and it was amazing to get a taste of art school. I got a lot better as an artist. I took legitimate college courses on editorial illustration, figure drawing, all sorts of different stuff. It was amazing, I was just pinching myself.” 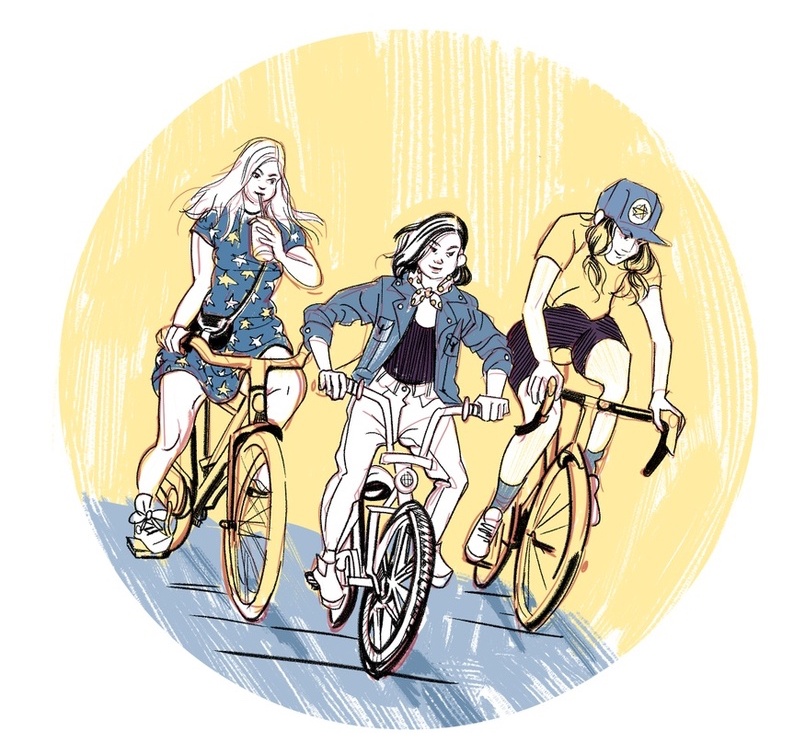 That experience solidified her desire to study art. After finishing high school, Rachel enrolled at Ringling in Sarasota, Florida, eventually graduating with a degree in illustration. “The first year basically felt like summer camp for 18-year-olds. It was great. It felt like an extension of Pratt pre-college because there was very little at stake and you were mostly just getting to know everyone. That was wonderful. Second year got really tough because they started cutting people pretty hard. Then you’re like, oh shit, I better make my grades or I’m going to be out on my butt. I made it through, but it was quite a jump to go from a summer camp vibe to having three or four studio classes and two hours of homework for each class every day.”

Rachel decided to move back to New York after graduation, eventually settling down in Astoria, Queens. At first, she tried to leave her Louisiana roots behind. “When I first moved here, I very much kind of disavowed where I was from and didn’t really want to acknowledge it, but over time you can’t escape where you’re from,” she said. “I sort of feel like I’m a little bit between worlds. I don’t really feel super Southern. I feel very much like an outsider when I go to there, and there are certain cultural things in New York that I don’t quite relate to either. I get really excited when I meet other Southerners that don’t live in the South because I feel like those are my people.” Rachel also finds a similar camaraderie with others in her profession. She appreciates their inherent understanding of the work she does. 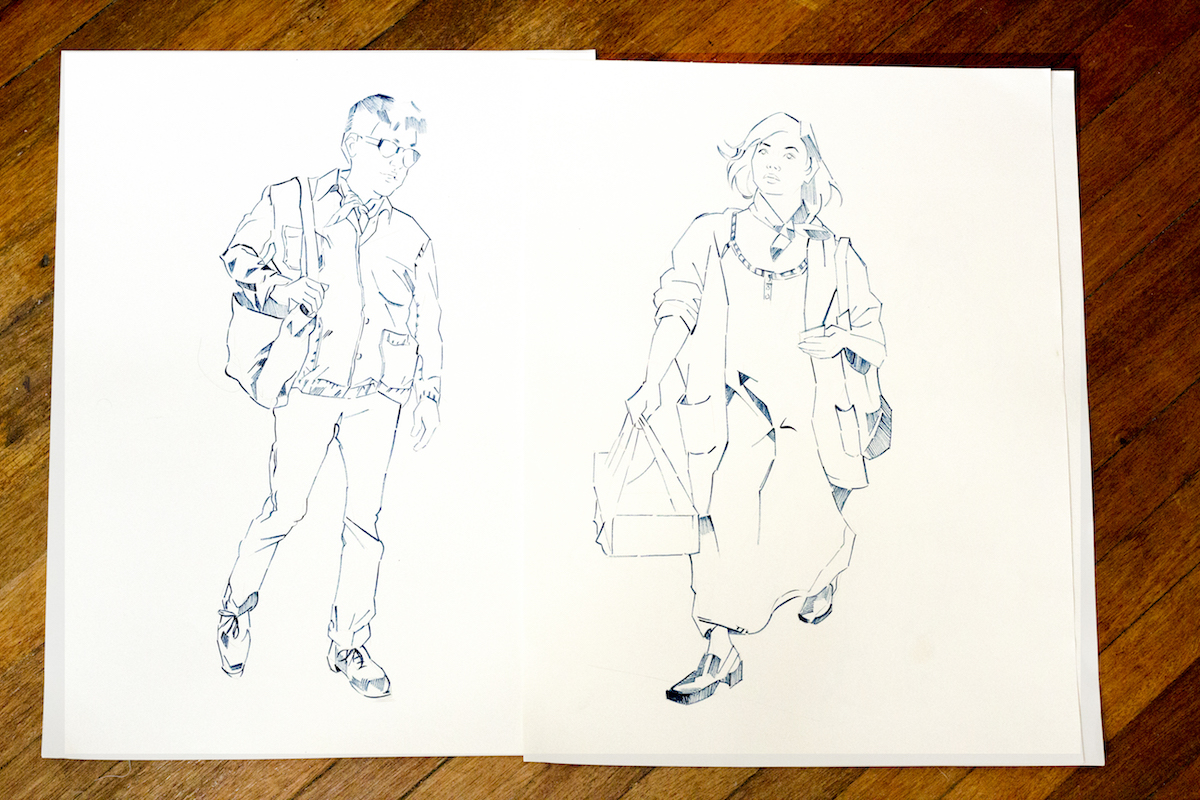 To maintain those connections, Rachel tries to go to a figure drawing session almost every weekend. “I’ve got some buddies there, so we’ll go out and have some drinks afterwards and talk about art,” she said. It’s a welcome break from working from home, and the conversation with other artists is motivating. “When you find people that you can talk shop with, it feels very freeing in a lot of ways. I might go to a figure drawing session and people are like, Rachel, how did you draw your figures this way? When you’re around people that don’t do your line of work, you don’t really get asked stuff like that and you don’t really feel as important about it,” she said. “When you are around your peers, or people who are interested in what you do, it makes you remember that you have this really unique thing. It feels liberating when I hang out with another artist, illustrator, designer."

With its large creative population and vibrant artistic community, Rachel feels welcome in the city. People in New York tend to embrace her as an artist and understand what she does for a living. Back home, she faced some rejection and alienation. “People like the weirdos here in New York, and I was always considered a huge weirdo, so I really like to live in an area where I’m a little bit more welcomed. When I would go visit back home, being a visual artist was considered more strange and suspect than anything, so I like that here people actually like that about me, they think that’s kind of cool. My social capital is through the roof compared to other places.” Being in the city has also helped Rachel discover a niche as a fashion illustrator and humorist. In a place where self-expression is often communicated through style, she is inspired every single day by the people she sees and the clothes they wear. 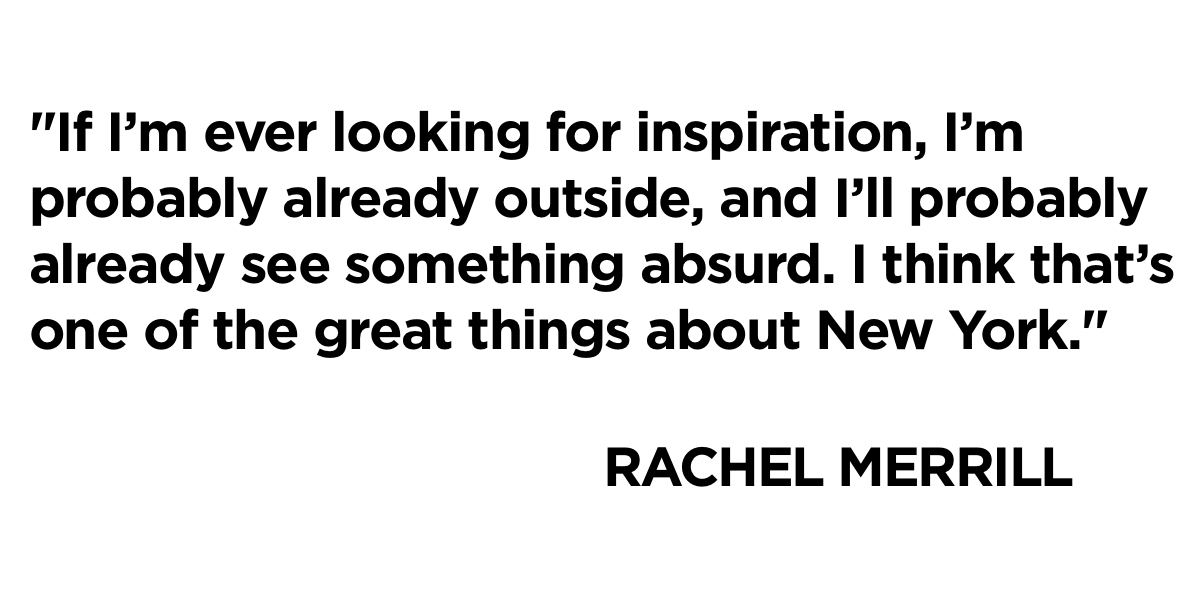 “The work I have at INPRNT is fine fashion illustration and single-panel comics that are humor-based, but also about fashion,” she said. Rachel began with an interest in street style photos, where she eventually noticed the potential for humor in some of the more outrageous outfits. “I kind of realized there’s a lot of funny shit people wear, especially when they are trying to stand out,” she noted. Her work is therefore very observant of people and trends, especially among her fellow New Yorkers. “That’s one of the best things about being here. The people-watching is pretty spectacular. I was on the Upper East Side recently and I was amazed to see how all of the women there had a fur coat on and a little dog to complement the fur coat. I wonder if they walk into a pet store and say, ‘I’m looking for a dog that matches this fur coat.’ I’m constantly thinking of silly things like that.”

Even as she pokes fun at some of the things she sees, her drawings are meant to celebrate them, too. Rachel loves nothing more than to see people wearing outfits they honestly believe in. “My message with the comics is: don’t take fashion too seriously. When it comes to style, even if someone is dressed utterly ridiculously, if it’s genuine from their point of view then I really enjoy that. The only thing I’m not a big fan of is when someone is dressing for someone other than themselves. Generally in New York most people are very individualized, and I like the eccentrics. Even if it’s going to look crazy, I like that more than the New York uniform of what is cool and acceptable.” 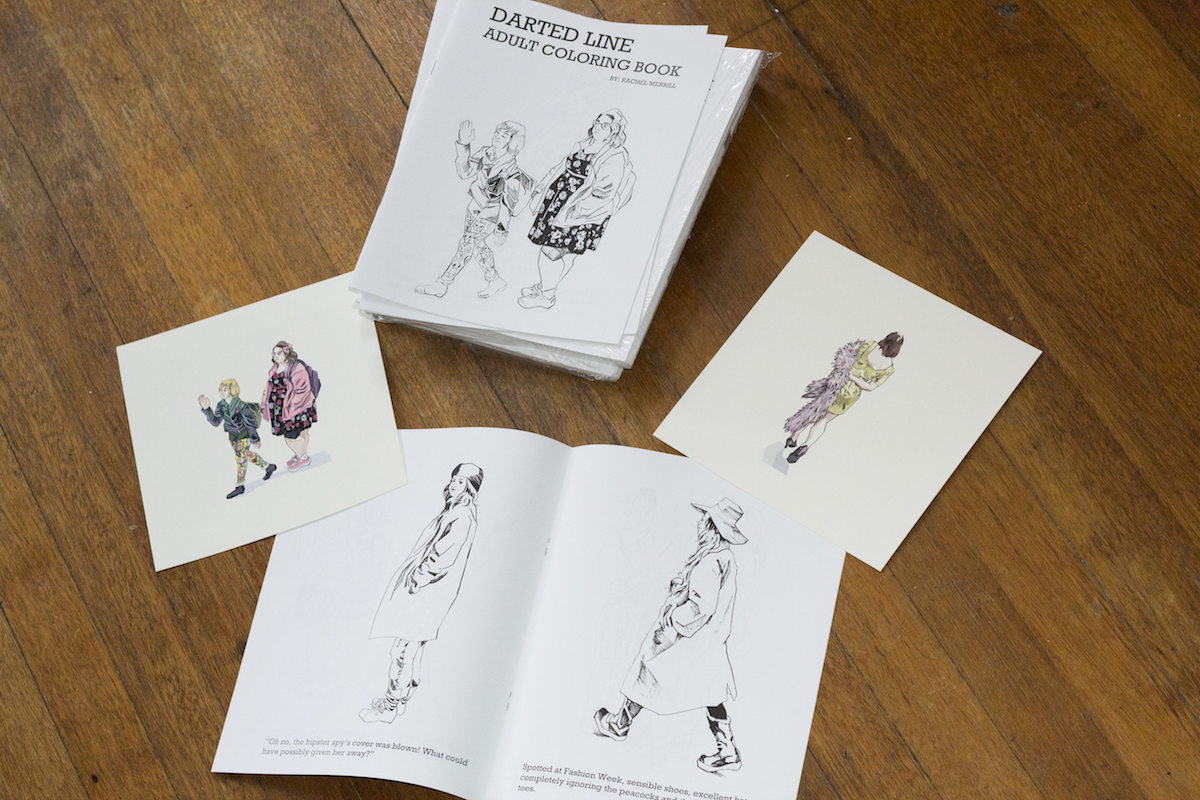 Rachel also makes a point of including a variety of body types in her work. She wants to show off different styles as they appear on all shapes and sizes, which is somewhat unusual in the world of fashion illustration. Featuring different types of bodies was an intentional choice, and one that initially drew criticism from others in Rachel’s field. “That was one of the first things that other fashion illustrators would criticize me about,” she said. “They were like, why don’t you make your people nine heads tall? And I was like, because I’m not interested in that, it’s boring and everyone does it, and I find I’ve seen plenty of stylish people in all shapes and sizes. I’ve also seen people who are tall and lanky and have no sense of style.”

Her ability to notice things like that helped Rachel turn her observations into comics. It’s a relatively new genre for her because she experimented with watercolors as a teen and was an oil painter in college. “I actually never thought I would be doing comics, even though those are my first love. At Ringling, I was more of a fine artist. I did large scale oil paintings, so when I started moving more into comics, I just remember being so surprised. I liked reading them, but I thought I couldn’t make them. Total nonsense! If you like something and you put enough time into it, then of course you can do it.” Rachel eventually started a blog for her comics at the suggestion of a friend. It was an easy way to showcase her drawings and make people laugh.

She also joined the artist community at INPRNT, where she sells prints of her work. “I had heard really good things about INPRNT's quality. I ordered some for myself and was like, these are way better than everything else. I also heard that the people there are really good to work with. I’ve been really happy with the experience,” she said. “One of my favorite pieces I’ve done is on INPRNT. It’s called New Years Walk. My boyfriend and I were walking down the street in the West Village, and this girl came out in this sparkly dress with this big fur coat, and I was just enraptured by her. As my boyfriend was talking to me, I slowly took out my phone and started creeping up behind her to snap as many references as I could. It’s a really glamorous image, but I also think it’s hilarious too. She was covering up the sparkly dress, but her coat was so shaggy she was still going to stand out no matter what.” 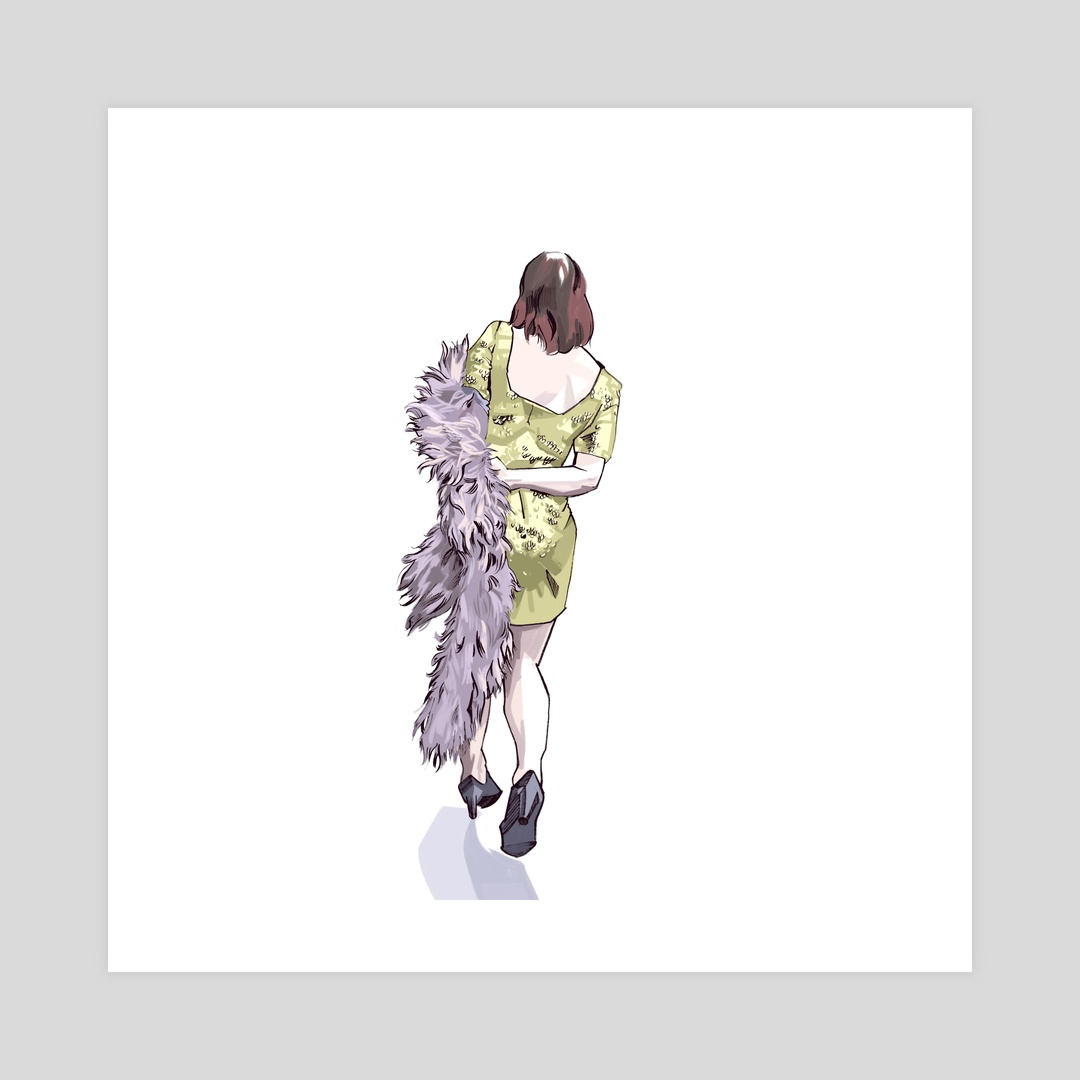 Scenes like this one provide Rachel with plenty of subject matter for her drawings. “If I’m ever looking for inspiration, I’m probably already outside, and I’ll probably already see something absurd. I think that’s one of the great things about New York. There’s so much visual stimuli that you don’t really get the chance to not be inspired.” When Rachel does hit a creative block or simply decides to take a break from illustration, she turns to cooking. “If I need a break from drawing, cooking is more relaxing for me. I don’t put nearly as much weight on it as I do art, so it’s a nice creative thing to do that has very low stakes, like if something doesn’t turn out right it’s totally okay. My mom passed away last year, and she wasn’t a visual artist herself but her creativity manifested in cooking. She was probably the best cook I had ever known, so it kind of feels like I’m connecting with her. I’m trying to keep that alive.”

Having an outlet outside of art is an good way to stay grounded. Pursuing a creative profession isn't always easy, and struggling is part of the process. “I’ve heard that when you go to art school, and probably a few years afterwards at least, most people aren’t going to be that amazing. They’re going to be really frustrated by that because they have the taste level to know what is good but they don’t have the technique to get it there," she said. But Rachel has never given up, and today she has a lot of fun working as an artist. Sometimes when Rachel draws people she gives the finished pieces to them, and she loves to see the joy and excitement on their faces. And she savors her career achievements, too. “I love the days where I get a really great client job and I just pinch myself, like I can’t believe I made it this far. Just seeing your work out there and seeing people’s reaction to it is pretty inspiring.”