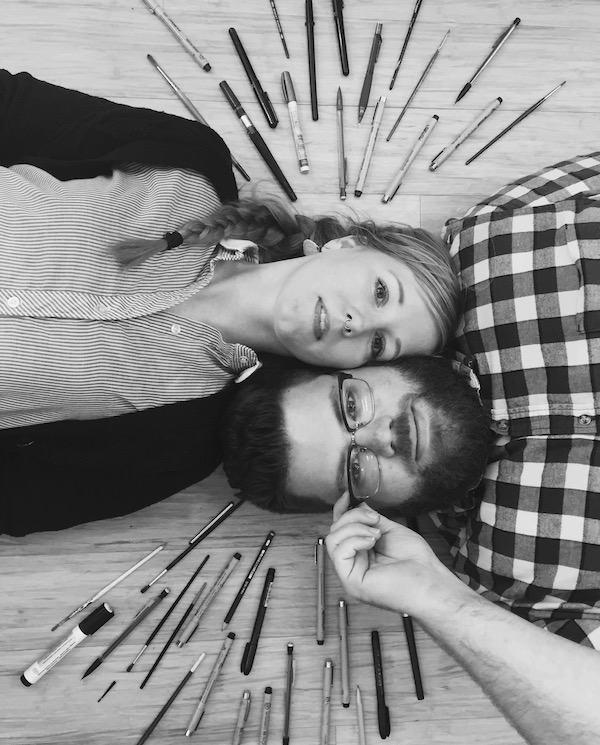 Work and life blend together as seamlessly as the watercolor paintings of husband-and-wife illustrators Justin DeVine and Megan Kott. They often parlay their shared interests, including painting and animals, into artistic collaborations. After falling in love while founding a popular Drink and Draw together, they've continued producing new creative projects and events as a married couple.

The pair met several years ago working in California’s Bay Area as graphic artists painting signs for Whole Foods. They were part of a team that traveled to help open new stores with colorful artwork and signage, and it was during one of these trips that their relationship—and artistic collaboration—took off. “We were talking about a Drink and Draw in Austin,” Justin said. They both thought that “would be a cool thing for us to do. [A few weeks later we] met up in a funky little bar in Oakland to drink some drinks and draw some stuff. At first a few friends would come. When we left the city last year, we had 50 people coming a week.” 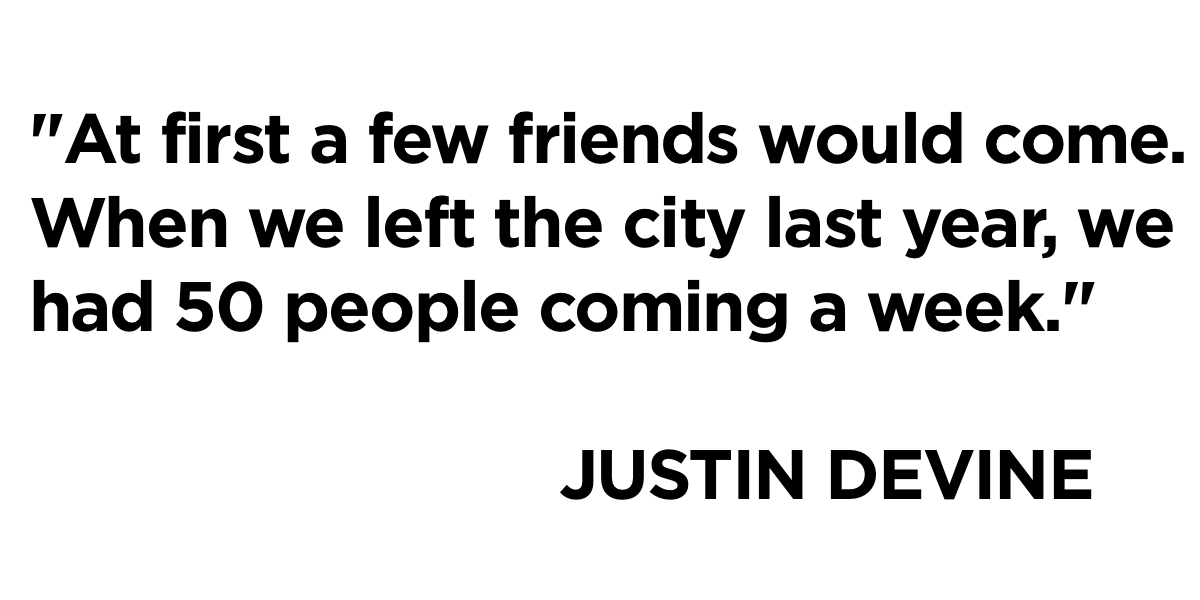 Creating Oakland’s largest Drink and Draw is just one of the ways Megan and Justin have found to share their passion for art over the years. “That’s where we really built up our creative community and fell in love,” Justin said. “Probably the strongest example of work that we have done literally together is Chimera.” For this project, which you can view in Megan and Justin's INPRNT shops, one artist painted the head of an animal and the other painted the body of a different animal. It led to some mesmerizing combinations, like a praying mantis head on a fox’s body or the head of a goat on the body of a duck. 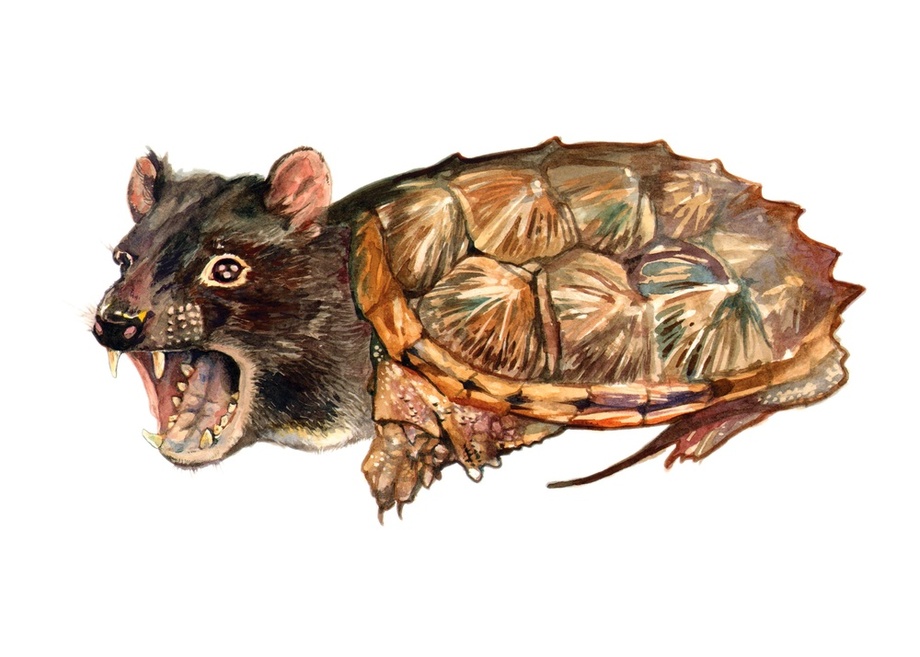 Megan and Justin have also collaborated on producing and curating art shows. “The biggest project we undertook was a David Bowie tribute show,” Megan said. “It started as a life celebration show tied to his album release on his birthday.” But while they were in the process of securing a venue, Bowie passed away. The show went on with 20 different artists participating, 400 people attending, and an all-female David Bowie cover band playing tunes all night.

Although Megan and Justin were part of a flourishing creative community in Oakland, the rising housing costs and long commutes there ultimately led them to Megan’s native Michigan. They now live in Detroit’s vibrant Corktown neighborhood. It's a historic residential area established in the 1800s that's famous for its colorful Victorian homes and annual St. Patrick's Day parade.

“We lived in a small apartment [in Oakland] and couldn’t afford a studio on top of that,” Megan said. “It was hard because we wanted more space. So we decided to try Detroit for a couple of years and it’s been a really good landing pad. We have a studio and we have a painting area in the basement, too.”

This studio is where Megan and Justin now work. Megan has done a lot in the area of children’s textiles and graphics, and she has two new projects coming out this fall from Chronicle Books. Previously, she partnered with the same publisher to create a collection of temporary "cattoos" featuring her signature humorous cat paintings. 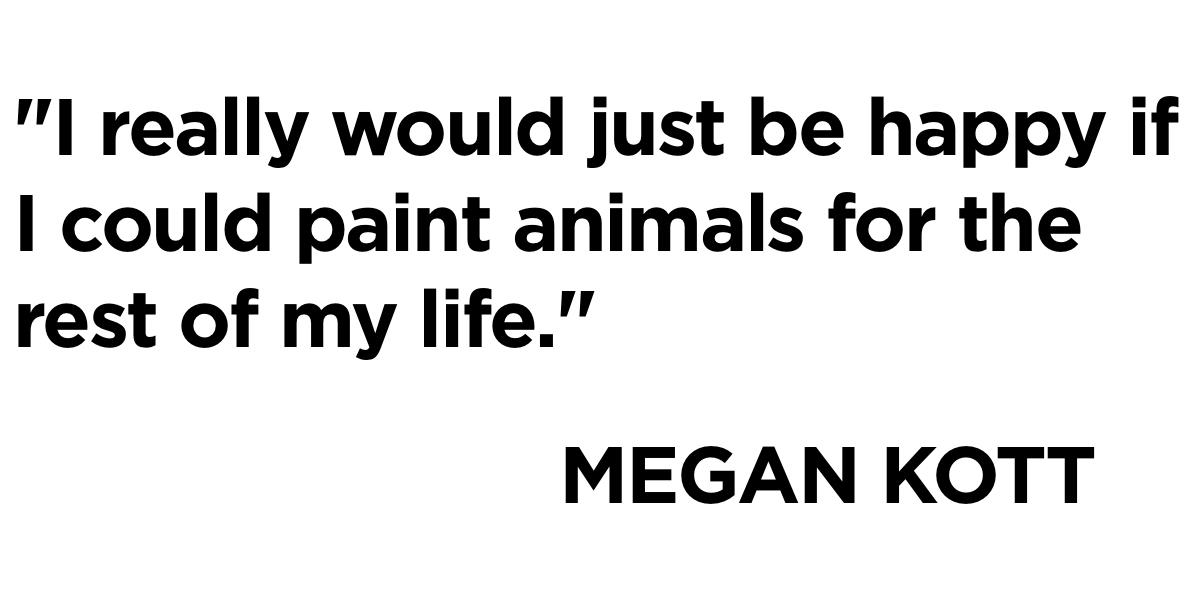 “I also run my side gig of doing pet portraits and cat drawings. That’s been my big thing,” Megan said. “The cat thing, that’s just been the most successful. It’s so much of the zeitgeist right now. I really would just be happy if I could paint animals for the rest of my life.” Megan's custom pet portraits range from simple busts to complex renderings of elaborate fantasy worlds where companion animals can surf waves or explore outer space. 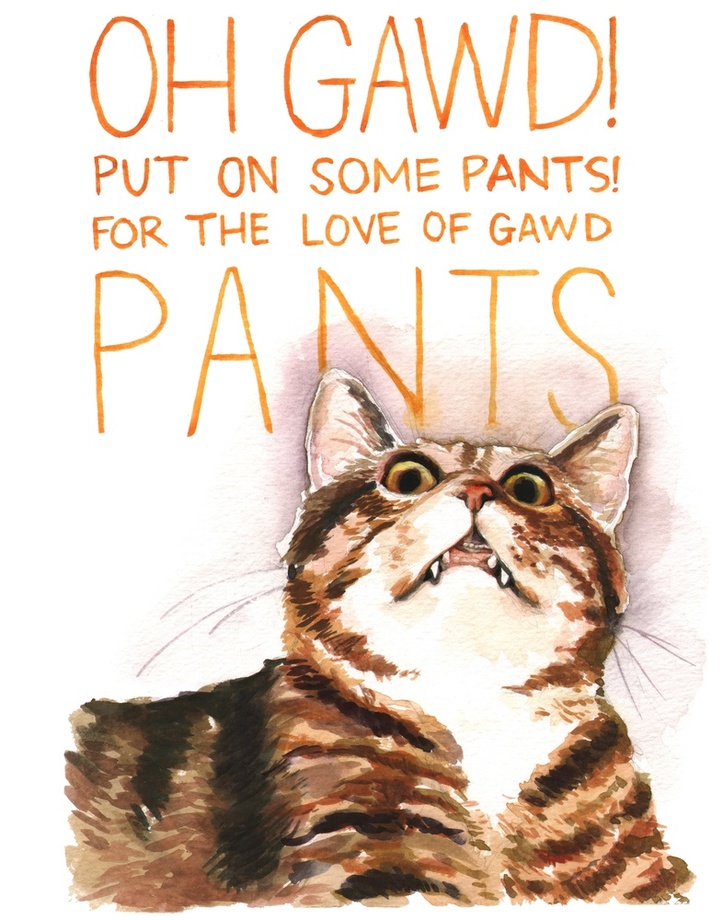 Megan primarily works in watercolors after having been introduced to them as a child by her aunt, a prolific watercolorist herself. “When I was seven or eight, we had a family reunion and I had the chickenpox,” Megan said. “She stayed at home with me and taught me really rudimentary watercolor techniques. I went to art school hoping to study that more, but was told that watercolor isn’t a serious painting medium. So I dropped it for a good ten years. I picked it up again around the time that we started Drink and Draw.”

Justin always liked to draw as a kid and studied painting in college. Prior to leaving Oakland for Detroit, Justin was working full-time as an illustrator at Amy’s Kitchen. He has kept them as a client and does work for them most weeks, along with his other clients in industries ranging from retail to arts and entertainment. On the side, Justin likes to stay fresh with daily drawing challenges. He primarily does pen and ink drawings that he colors digitally or with watercolors. Like his wife, Justin often makes animals his subjects, more often focusing on wild animals. In some of his other work, he invents parodic mash-ups and re-interpretations based in pop culture.

“I’ll do sort of regular projects to keep my hands busy,” Justin said. “For two years in a row in September or August I did 31 fictional characters in a row. On days when I don’t have commissioned work, I’ve been really enjoying going through some of my old sketches and figuring out which of those I can develop further.” 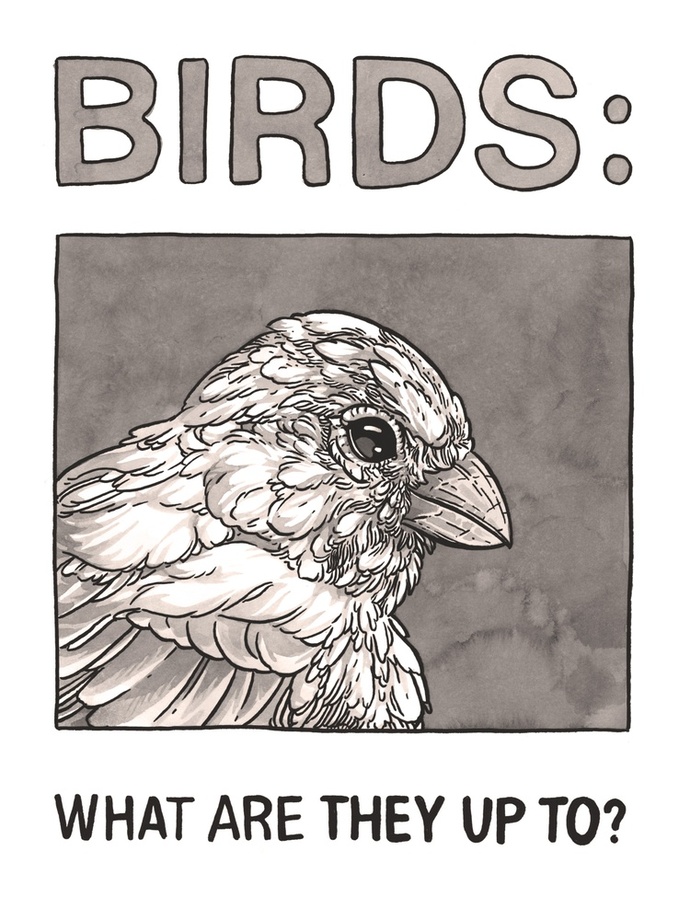 Megan and Justin are both established in their artistic careers today, but they still remember what it was like when they were just starting out. To anyone in that stage, Megan has some advice. “There’s room for everyone. People get worried about not doing something that’s already been done before. No one is going to have your take on it. It’s going to be completely individual coming from you. I’m big on helping people and not keeping art secrets.”

Justin echoes that sentiment, addressing a concern that is common among beginner artists. “It’s important not to compare yourself to other people’s skill levels. There are lots of people who look at people who are incredibly talented and think, ‘I won’t be able to do it like that, so it’s like why bother to do it at all.’ That’s counterproductive and hurts all of us creative types.”

One of the ways Megan and Justin spread the word about their art is by attending conventions; they’ll be at a different event every month for the rest of the year. It’s all this convention-going that got them started with INPRNT, where the couple has been selling work since 2013. “We wanted something where we could buy our own prints,” Megan said. “It’s a really great resource for artists to bring nice prints to conventions. It’s the best quality, least expensive option. I recommend it to people.” Justin agreed and said, “Before when I would pay to have my own prints, I could never afford nice prints and the qualities would vary wildly. The first time I tried INPRNT I thought the quality is so great and it’s so consistently great.”

Their most recent convention was Cat Camp NYC, where Megan displayed her cat-themed wares including prints, pins, and pillows. Next month, their itinerary includes events in Chicago, Los Angeles and Cincinnati. Collaborating is an ongoing part of this artistic couple's relationship, and their work is often inspired by their love for animals. When they're not attending conventions, they will continue their work together under the watchful eyes of their three cats: Griffin, Thessaly and Davos.