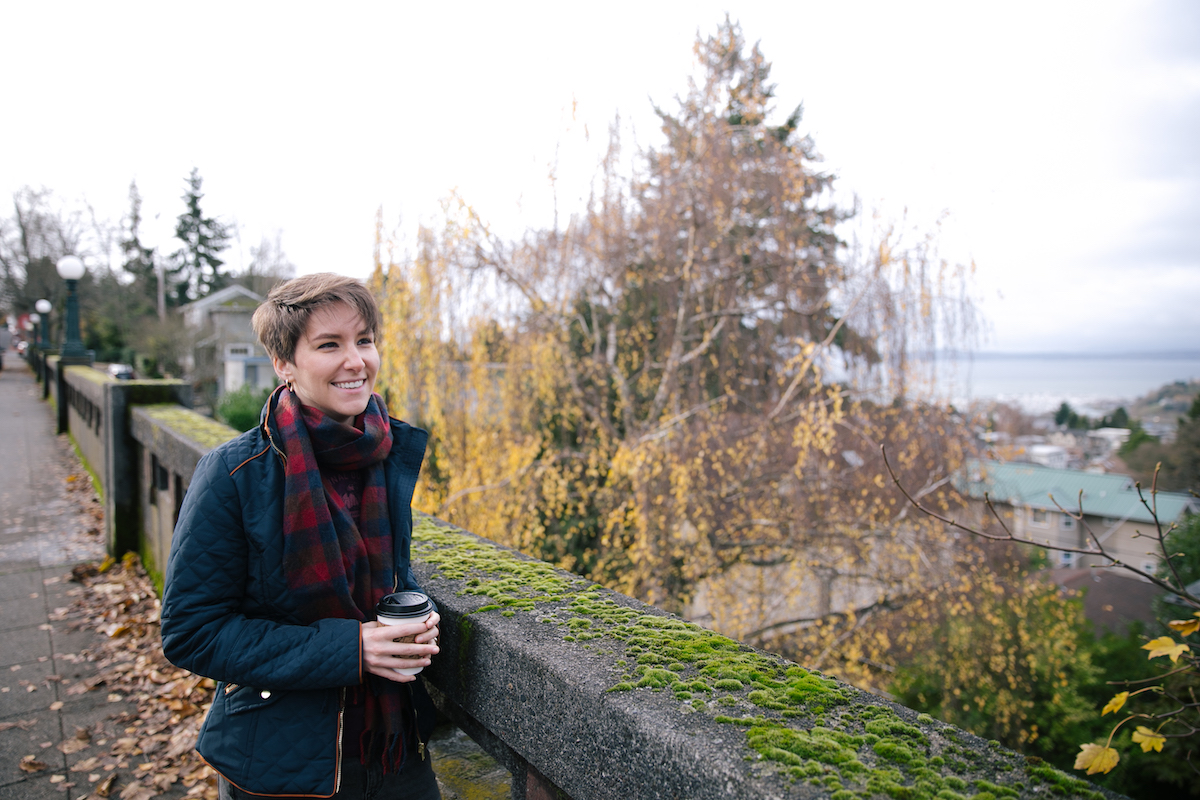 Diverse interests outside of art and a willingness to seek out art mentors have helped shape Launt Saint-Onge's career as an illustrator. Her interest in art began as a child growing up in a rural area of New England called Woodstock, Connecticut. “It’s really just woods and a couple of schools,” she said. “I grew up in the middle of nowhere and I was starting to think about what I wanted to do for the rest of my life.”

As Lauren’s high school graduation approached, she began to seriously consider becoming an artist. “I decided to apply to Massachusetts College of Art and Design in Boston, and I actually got in by the skin of my teeth. It was the first time I would ever move to a big city. It was really intimidating at first, like okay, you start your career in art, and everybody tells you that it’s a risky business, right? There’s that stereotype of the starving artist, and you go into an art career not always because of the money, but because you love it and it’s the only thing you can imagine yourself doing as a full time job.”

Art school was a formative experience for Lauren. The sense of community and the critiques she received were as valuable as the technical skills she learned. “I think art school really helped me grow a bit of a harder shell when it comes to being critiqued, and knowing how to talk to other artists, knowing how to talk to other people. I think it’s a really interesting and helpful social experience as much as it is an educational one. I think college was a great growing experience in terms of getting a basic education and foundation as an artist, while also learning how to work with other people in person. It was a really important lesson for me.” 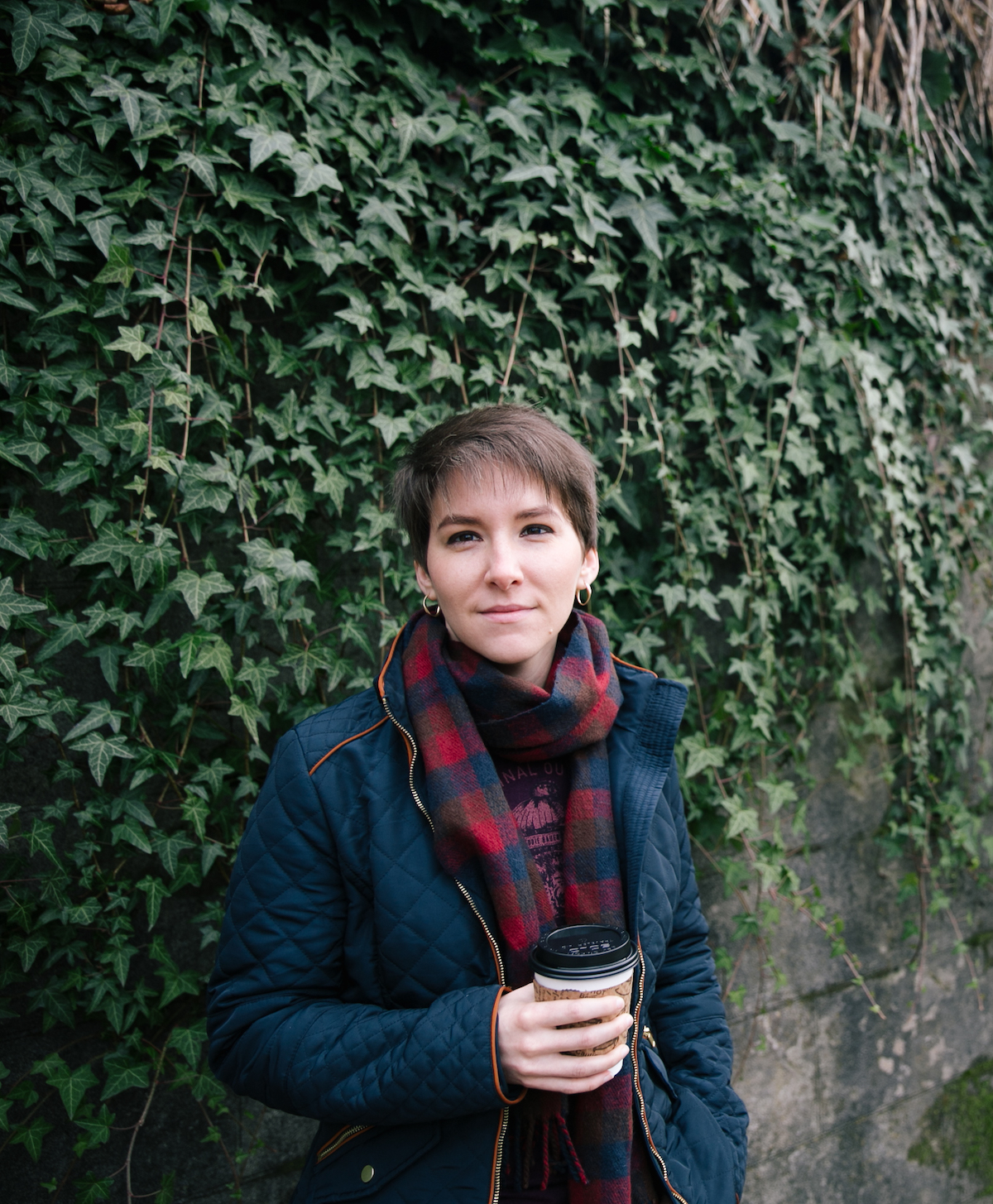 Where there were gaps in the curriculum, Lauren approached working industry artists for mentorship and advice. "I got into college knowing I wanted to be a concept artist for video games or film, so I spent time researching those industries. At the time, my college hadn't had a full grasp on what kind of work that entailed, and at first, neither did I." She took opportunities at conventions and other events to talk to artists she admired, even when she felt scared. "Those experiences were the most valuable to my career. I think that the wisest thing an artist can do is to show their work. Don't hide it. I went with my portfolio, up to some very intimidating people, and asked to show them where I was and where I wanted to go in my career. I said, please, just give me any and all feedback you have for me to succeed." 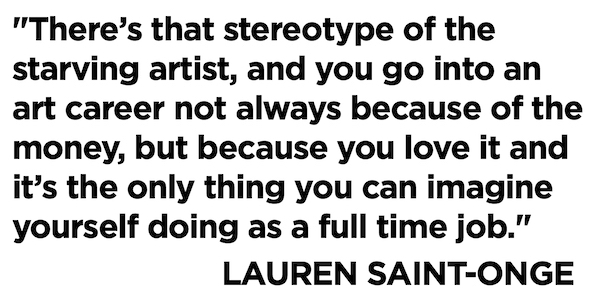 She also asked those seasoned concept artists for insight on their work routines and daily lives so that she would know what to expect, as well as the steps to get there. All of this preparation as an art student led to a job offer from a major video game company. “When I got out of college I was hired by Harmonix Music Systems, who are well known for the Rock Band series and Dance Central and a couple other properties as well.” She said that it was gratifying to work on beloved games that make up an important part of people’s lives. "It's incredibly rewarding to work on projects that people love, like their favorite book or video game. You realize how much people invest in the things that you're contributing to, and it makes you want to put the same care and attention into it that they've invested. You definitely want to put in the same amount of effort as they put in their love of these things." Lauren worked for Harmonix in Boston for about six years before moving to Seattle, where she worked for Microsoft before transitioning to freelance work. 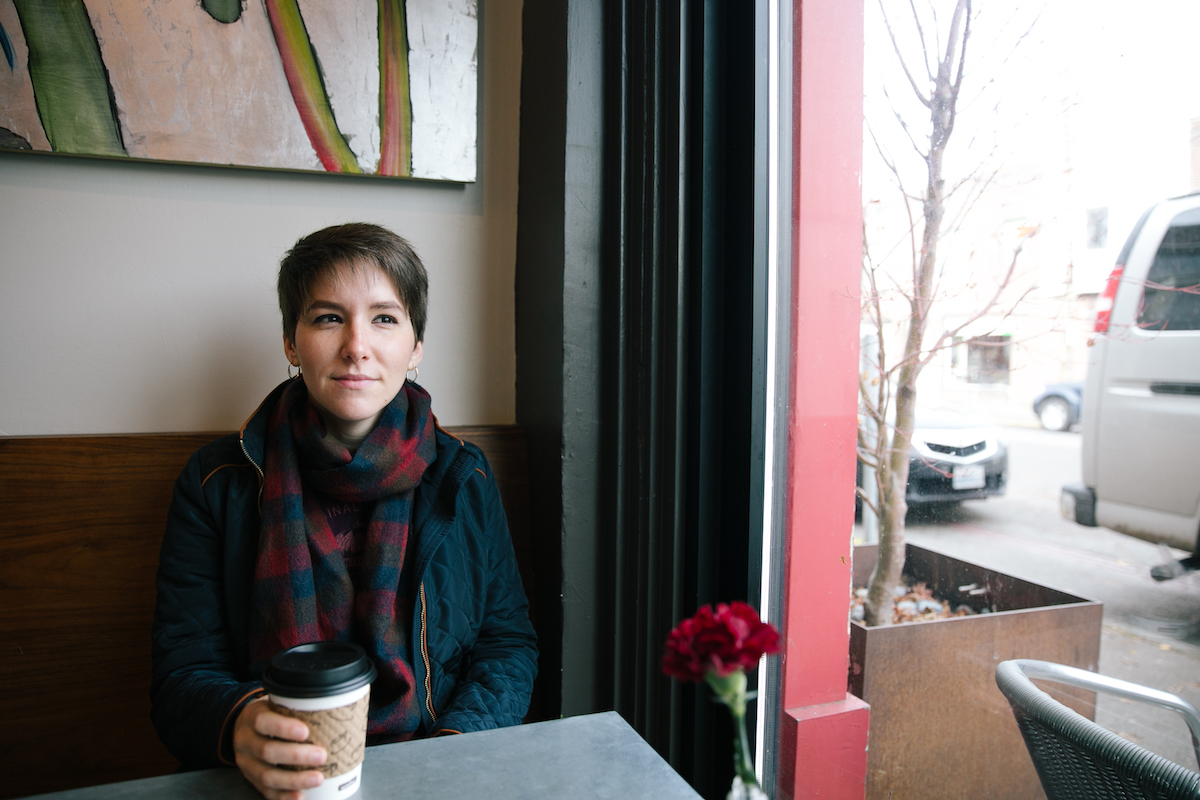 Moving from Boston to Seattle meant a huge change in culture and environment. “You drive thirty minutes outside of Seattle, and you just see mountains every time you look outside," said Lauren. "For me, I really enjoy hiking as a hobby, especially since I moved out here. It’s a nice way to clear my head and take a break from being in an office or in front of a computer all day, which is kind of the life of a digital illustrator most of the time. Moving here, it’s definitely a lot more relaxed than in New England in terms of being able to kind of work and play and have those really balance out. I find that I really think about what makes me happy out here, and what my next steps are going to be as an illustrator and as a person. It’s kind of a different way of thinking. I’ve heard the expression before that New Englanders live to work, and the West Coast works to live. I actually kind of think that’s true. Out here I think people really take advantage of the scenery and their time.”

Lauren believes in artists taking up active hobbies. It helps to counteract the sedentary nature of working on art for long hours, and the exposure to new experiences can be an important contribution to the artist’s work. “Its really helpful to get up close and personal to the things you normally wouldn’t consider getting close to or even trying out. Everything is worth trying at least once just to see what its like first hand.” At one point, Lauren spent four or five years on a personal project exploring the American Revolutionary War. She found that horseback riding helped with her historical drawings of horses. Even if the activity doesn’t directly lend itself to the artist’s subject matter, it encourages healthier creative habits. “I think there's a certain point everybody experiences as an illustrator or concept artist, where you’re sitting in front of your desk for hours and hours, and sometimes you don’t go outside for a week on really bad occasions,” she said. “It’s not natural for somebody to be chained to a desk for so long, and there’s always more to an artist than just their art.” 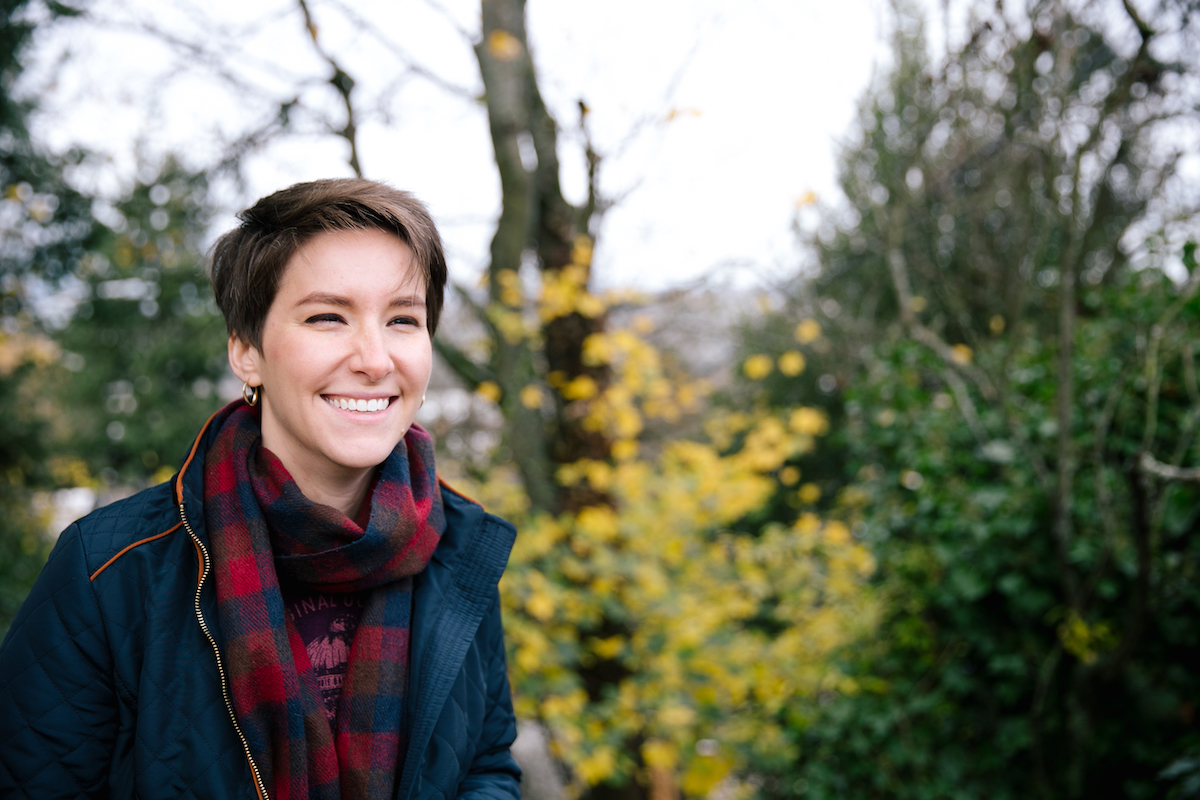 By selling her prints at INPRNT, Lauren has made more time for herself. “I remember when I applied for the first time and I didn’t get in, and I kept applying until I got in, I got approved. And it ended up being a really, really awesome experience for me. Having INPRNT, for me, just made my life a lot easier. It let people have access to my work more easily. All I have to do is proof one piece, and I know that each piece will be consistent for people who are buying my prints. I don’t have to go back to a print shop every 30 days to get more prints done. I find that I also put a lot of stock into how are people receiving my prints. Are they of good quality, do they have weight to them? I feel like INPRNT has that kind of weight and texture and quality that I want my art prints to have when someone receives one in the mail. I want the print to feel like it’s valuable, that it’s worth somebody’s time, and I think INPRNT does that really well. I really appreciate what INPRNT does. It’s awesome.”

Her schedule also freed up when she transitioned from a studio concept artist to a freelance illustrator. "Working in an industry with unpredictable hours and traffic, by the time you get home, you're pretty much beat. Managing your own schedule can be a great way to get back in touch with yourself again, make the art you love, and remember why you got into the business in the first place," she said. “I’m finding out that I’m getting way more sleep as a freelance illustrator. I’m happier because it’s a healthier way of living, and I’m managing my own time. I wake up around 9 o’clock, have breakfast, then if I’m in a groove I’ll just work until 8 at night.” That said, leaving the studio environment also meant losing her daily interactions with other artists, as well as their feedback. "Working in a studio as a concept artist, you're constantly working with other people from different disciplines, and sharing your work with them every day. As a freelance illustrator, I definitely think it’s more of a lone wolf situation. You’re sitting at your desk a lot more thinking about what you’re doing and conversing mostly through email.” 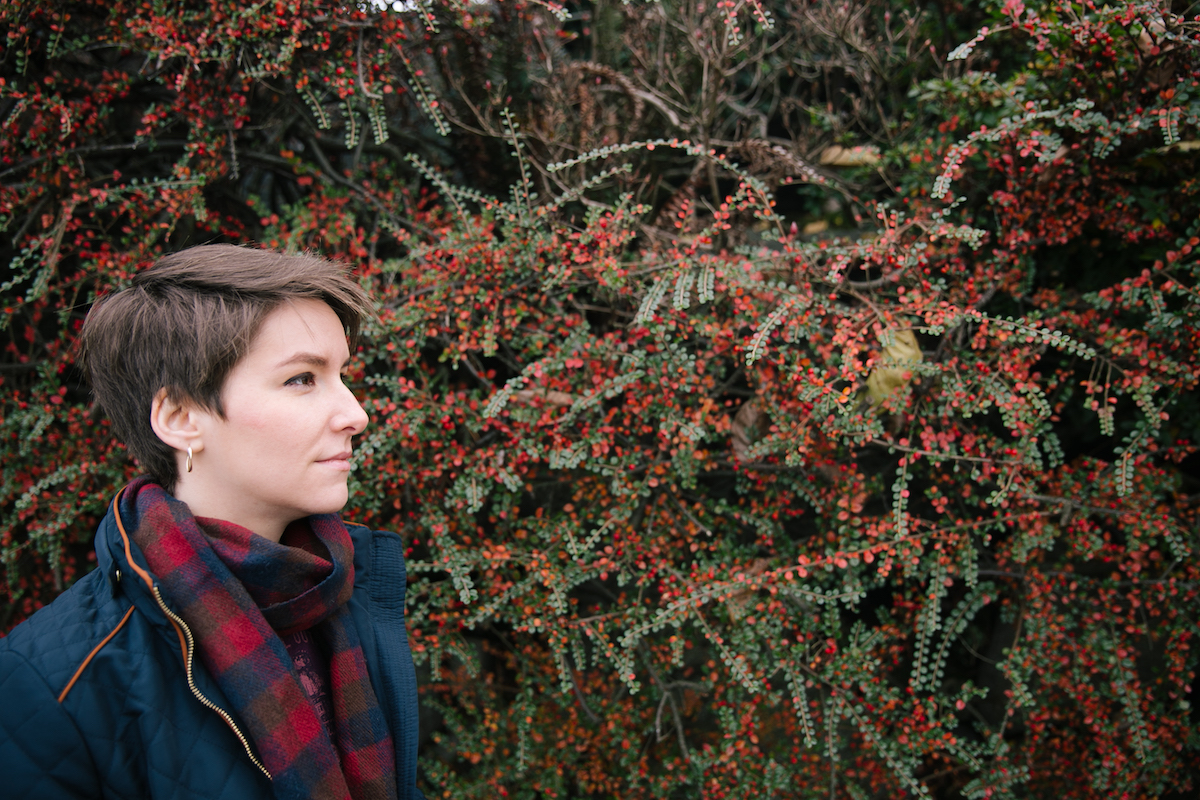 With that in mind, Lauren takes steps to maintain creative connections outside of work. She said that going to local art meet ups is a great option, along with keeping in touch with other artists online. "I think the most helpful thing you can do as an artist is have a community that you're a part of, where people work with you and you work with them on figuring out how to continue learning and growing alongside one another," she said. It’s a continuation of the critiques Lauren learned to give and take in art school, as well as the steps she took to seek mentorship as a young artist. “I’ve always found that there’s a ton of generosity and sharing among artists. Everybody is of course competing on some level, but you can’t succeed by constantly competing with others. All the artists that I've met have been incredibly supportive in both personal and professional realms. They're not only your colleagues, but your friends. And even if feedback that you might be offered may seem harsh, it's exactly what you need to progress and to grow."