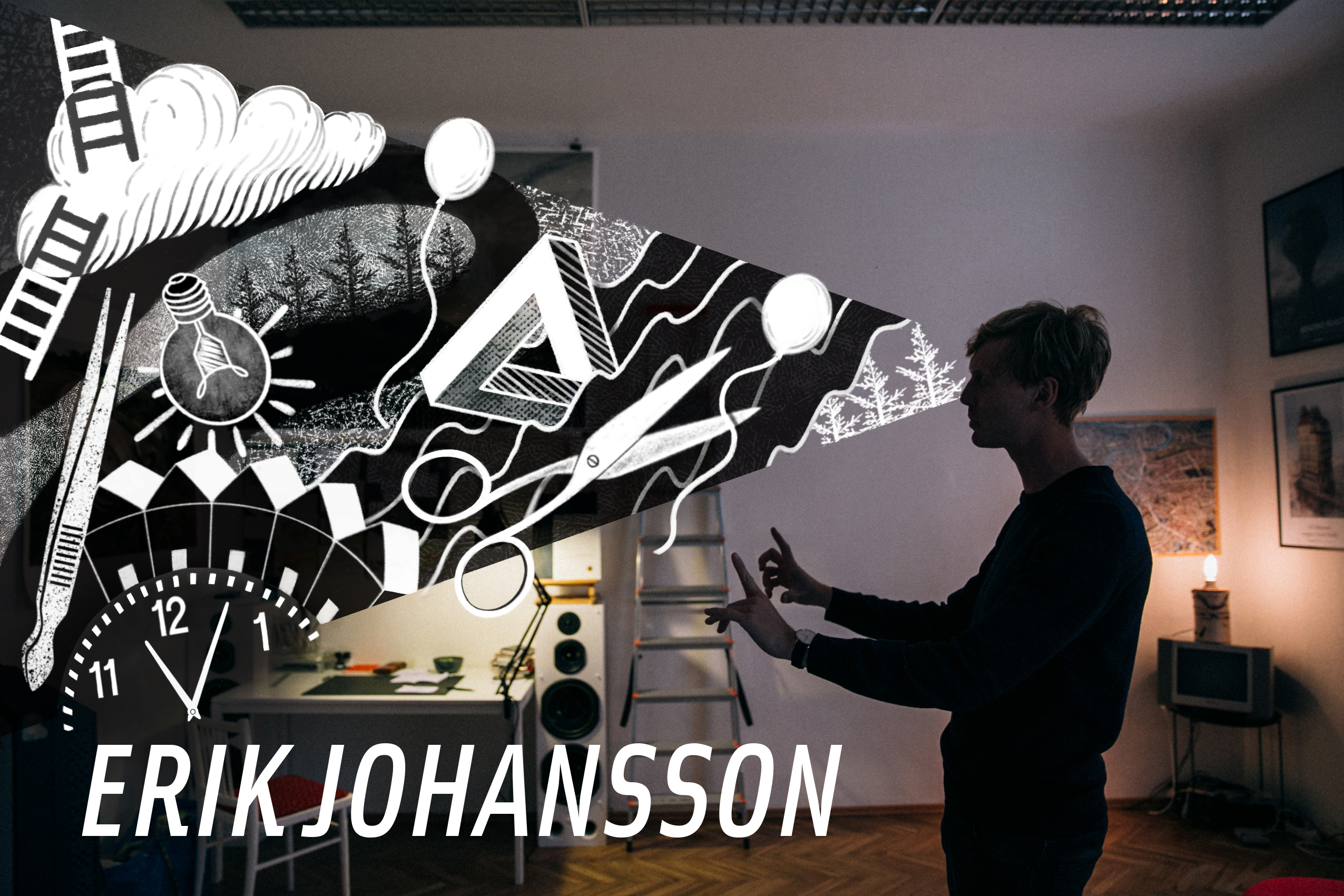 Erik Johansson celebrated his 15th birthday with his family on the farm where he grew up. The digital camera he received as a gift from his parents was a complete surprise, and Erik began experimenting with it right away. His first subjects were his family members and the surrounding scenery in rural Sweden: little red houses and rolling green hills, subjects he is fond of to this day.

It was the year 2000, so digital cameras were quite new and miraculous at the time. With no film to develop and process in the lab, for the first time photos appeared instantaneously at the push of a button. Erik was hooked, and he wanted more from this emerging medium. Combining his interest in drawing with his knowledge of computers, he began manipulating the photos in a way that looked real, yet impossible. It was the start of his career as a photographer and artist best known for mind-bending photorealistic scenes.

“I discovered photography and photo manipulation at the same time. Being used to drawing, it was quite natural,” Erik said. “I didn’t want to just press the trigger of the camera and be done. I wanted to see what more I could do with it." He started thinking back to his childhood drawings and the imaginative scenes he would come up with. Could he do the same with a camera? “I have always found reality a little bit boring,” he said, “so I wanted to see how much you can modify a photograph and have it look real.” 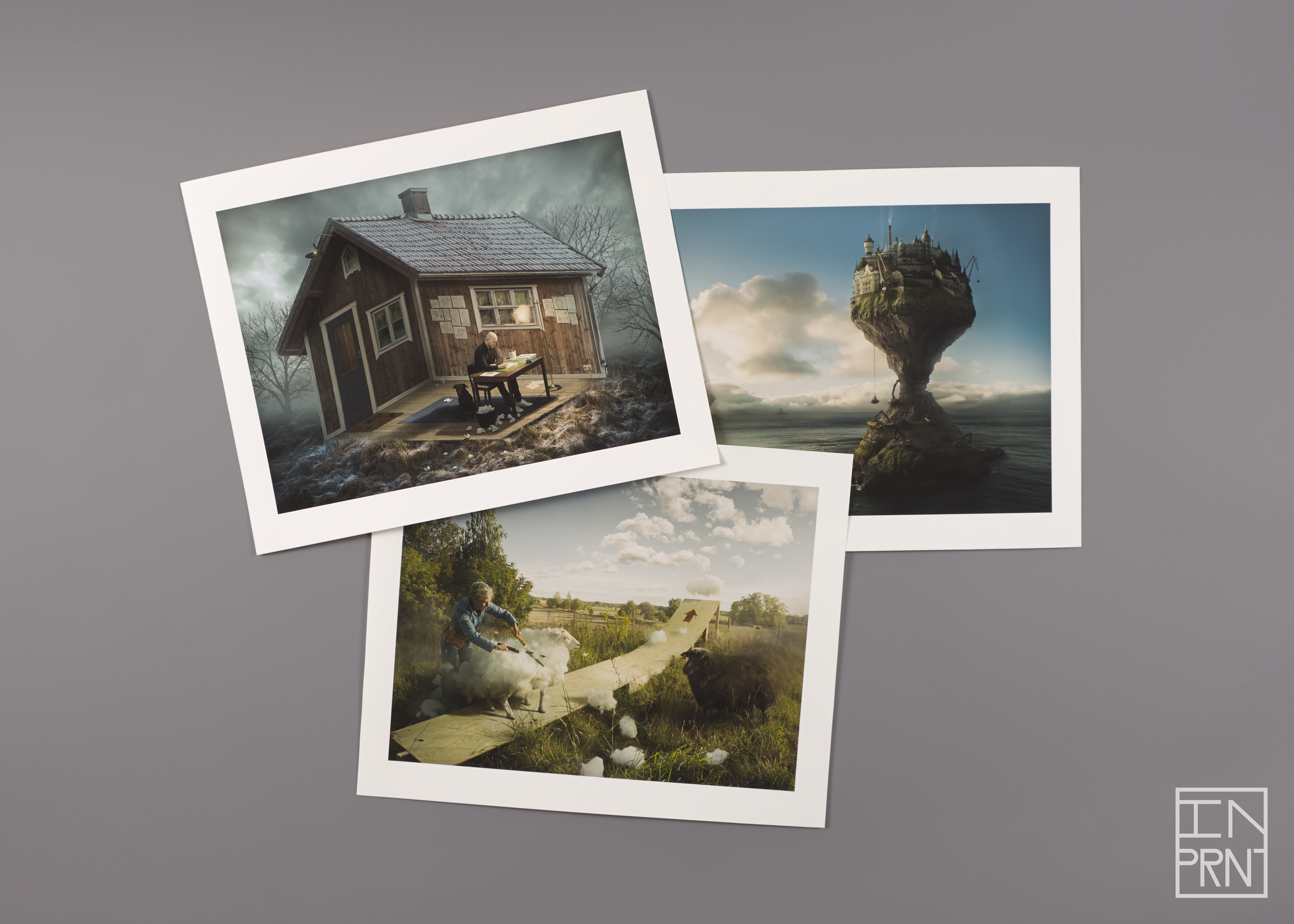 Now in his 30s, Erik’s work still conveys childlike wonder. As he goes about his daily life, he emulates the natural curiosity of childhood by asking impossible questions. He keeps children’s books in his studio for inspiration, along with playful objects like a light-up globe of the world. And when he exhibits his work, the interpretations he hears from kids often mean the most to him.

He rarely comments on his own pieces, preferring to leave them open for others to look at and understand in their own ways. In his latest image, Stellantis, a woman is holding a giant pair of tweezers up to a sky full of stars. Is she taking the stars down, or is she putting them up? Erik prefers to leave the question unanswered, but we do know one thing with certainty. Every part of the image is 100% real, captured by Erik’s lens. Nothing is computer-generated or sourced from stock photography.

In order to do this, sometimes he commissions local craftspeople to make props for his images. The tweezers were forged by a local blacksmith in Prague, where Erik lives. The city has a booming film industry that attracts many talented artisans, but Erik also enjoys making his own props. “I already spend a lot of time in front of the computer, so any time when I can sculpt or build something is good. It looks real, it’s more fun, and it saves a lot of time in post-production,” he explained. 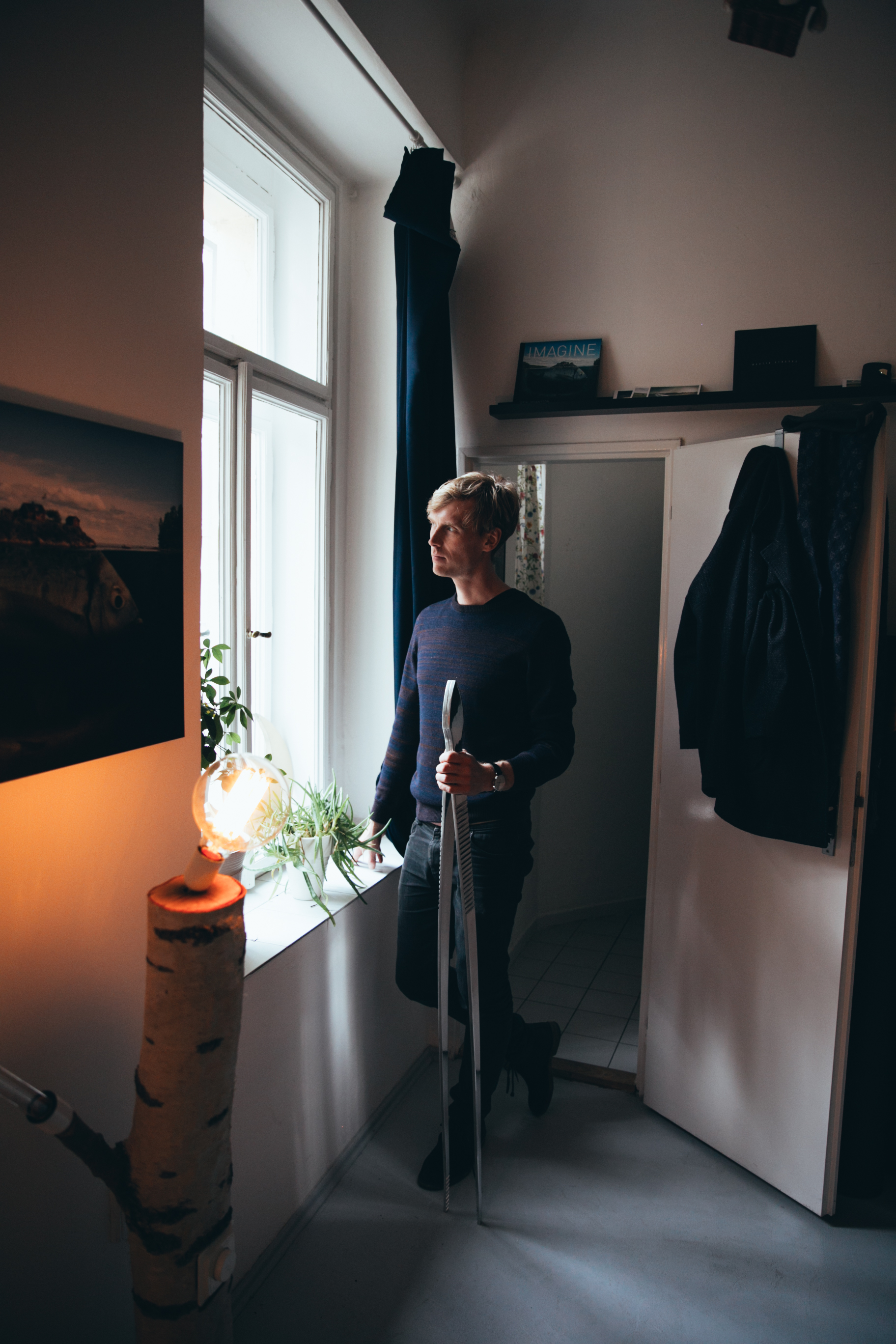 These aspects of Erik’s process are revealed in behind-the-scenes videos that show his audience the hard work that goes into each piece. In one video, Erik constructs a building out of cardboard and creates the effect of a landslide using oatmeal. All of this takes place in his studio, which he mainly uses for post-production work and storage of props and equipment. “It’s actually just around the corner from where I live,” he said. “It’s nice to have work and your free time separate, but at the same time I like to be able to come here even if it’s for something small.”

The studio is decorated with inspiring objects for a comfy, creative atmosphere. “Most of the things in my studio are in one way or another useful to me. I have some children's books for inspiration, I have different lights and props. The other stuff is basically just to create a certain mood in here, because I don’t want it to look like a traditional plain white boring studio. I want it to feel like a cozy place where I can go create stuff. It’s more of a living room to me in a way than a studio.”

Having this space close by is helpful for Erik as he tackles multiple projects at the same time. “I usually have from two to three, to up to ten projects at any stage at any given time,” he said. Some of them come together quickly, but others take much longer, even years. Erik had the tweezers made a long time ago, and he said they are his favorite prop he’s used so far. The dreamlike image of a woman holding them against a sky full of stars has finally come together after years of planning and preparation. 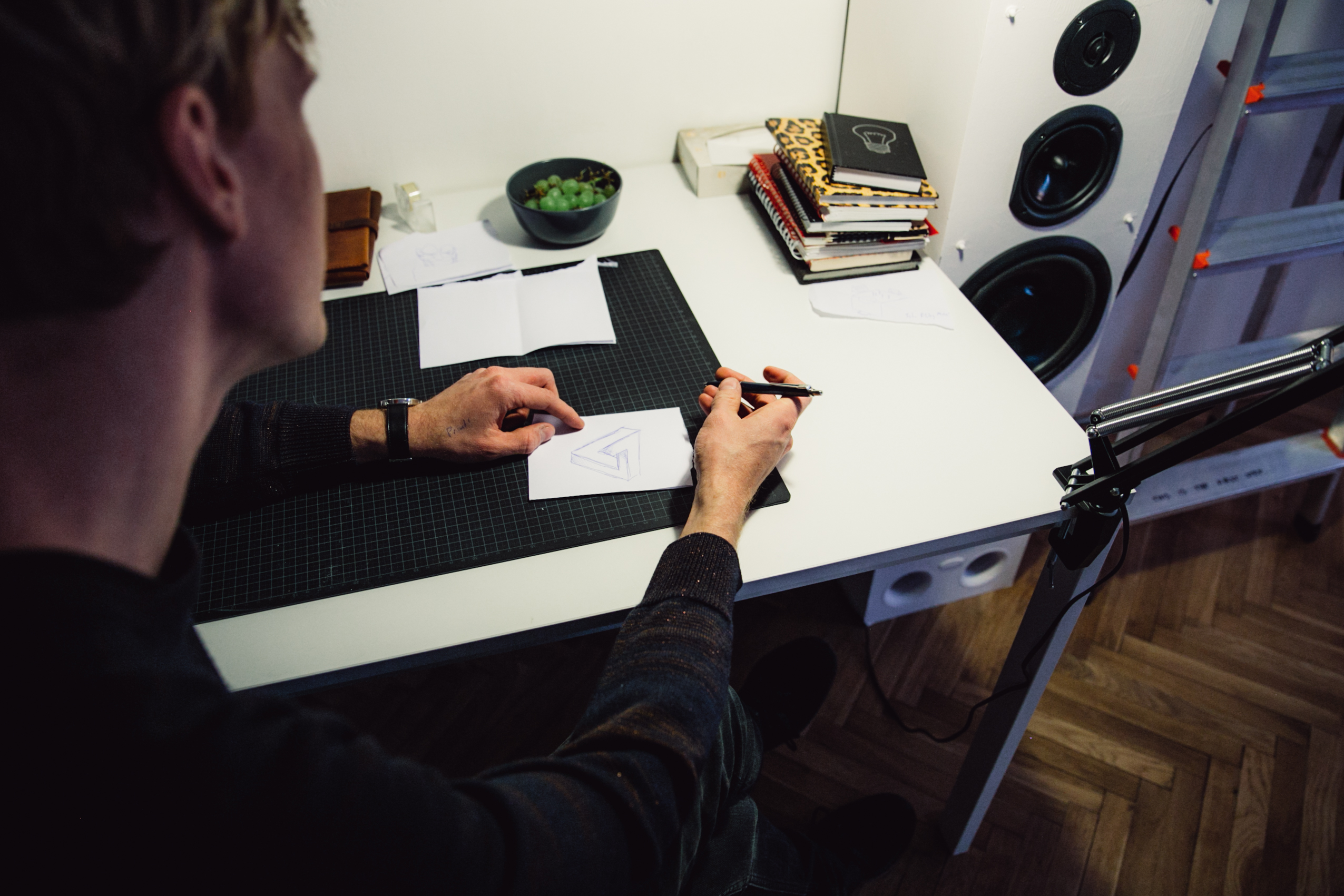 It all started with a sketch, which is how Erik keeps track of his ideas. “I have always been a very visual person, so it usually comes down to the sketch. I have a lot of different sketchbooks that I carry with me. An idea is not just born in an instant, it’s usually small little things that I find interesting, and as soon as I think of something I try to sketch it down. You never really know when the creativity or inspiration will strike you, so you just have to be ready with a pen and paper when it comes,” he said.

Erik's ideas eventually come to life in shoots on location and many hours of post-production work. With multiple projects going on at various stages of planning, he stays very busy. “I may spend around one month per image, but planning is what takes the most time,” Erik said. “That’s a quite abstract part of the work, looking for locations or thinking about props. The shooting takes about a day, and the retouching usually takes about a week, spread out over several weeks or months sometimes.”

He frequently travels back to his hometown in Sweden for shoots. Growing up on a farm shaped the way that he creates, he said, and to this day he likes to use familiar locations from back home. “I have always been very close to nature,” he said. “Somehow it’s something I keep coming back to. When it comes to shooting and inspiration, I always try to visit the countryside." Similar locations also create a certain consistency in Erik’s work by uniting many of his wide-ranging ideas into a connected universe. 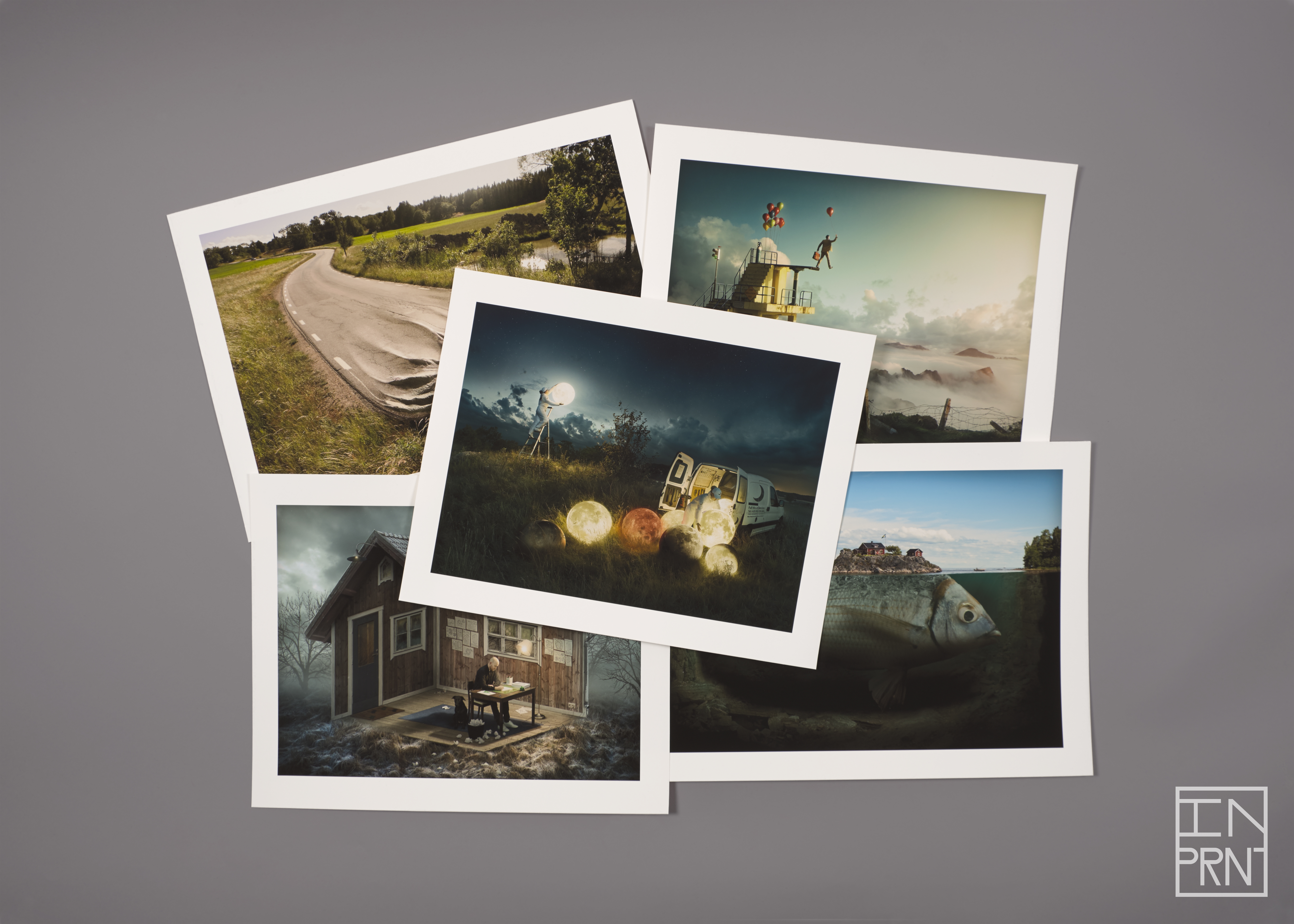 One recent example is Full Moon Service, a photograph Erik took in the area where his family lives. “I found a field with a little hill, so I went out there with the car and models and some lamps. The night was getting darker and the light from the lamps became stronger in relation to the environment and the ambient light. I knew at some point the lights would be the perfect strength in relation to the surroundings. By that time, I knew what position I wanted the models to be in.”

He envisioned uniformed moon service people with a transport vehicle containing tools, calendars, and checklists. “I wanted to put a little bit of magic back into the world with this image, like the kinds of things that you imagine when you are a child. What if the moon is not just a big rock floating in space around the earth? What if it were some kind of profession, and there were people changing the moon every night?” On the day of the shoot, Erik’s models, props, and location came together in front of his lens after months of planning.

Details like these make his work look simultaneously realistic and magical. “Full Moon Service was an idea I had for quite a long time before I started to realize it,” Erik said. “Over time it kind of develops, and that’s why I think it’s important that the ideas take time. Small details make the image interesting.” Capturing as much as he can on location also makes the final result look grounded in reality. “I have certain limitations on myself, and I think it’s a good idea creatively to force yourself in a certain direction. One of them is that I have to photograph every part of my work. I don’t use any stock photos or anything, so I am limited to locations around me, usually in Prague or somewhere in Sweden.” 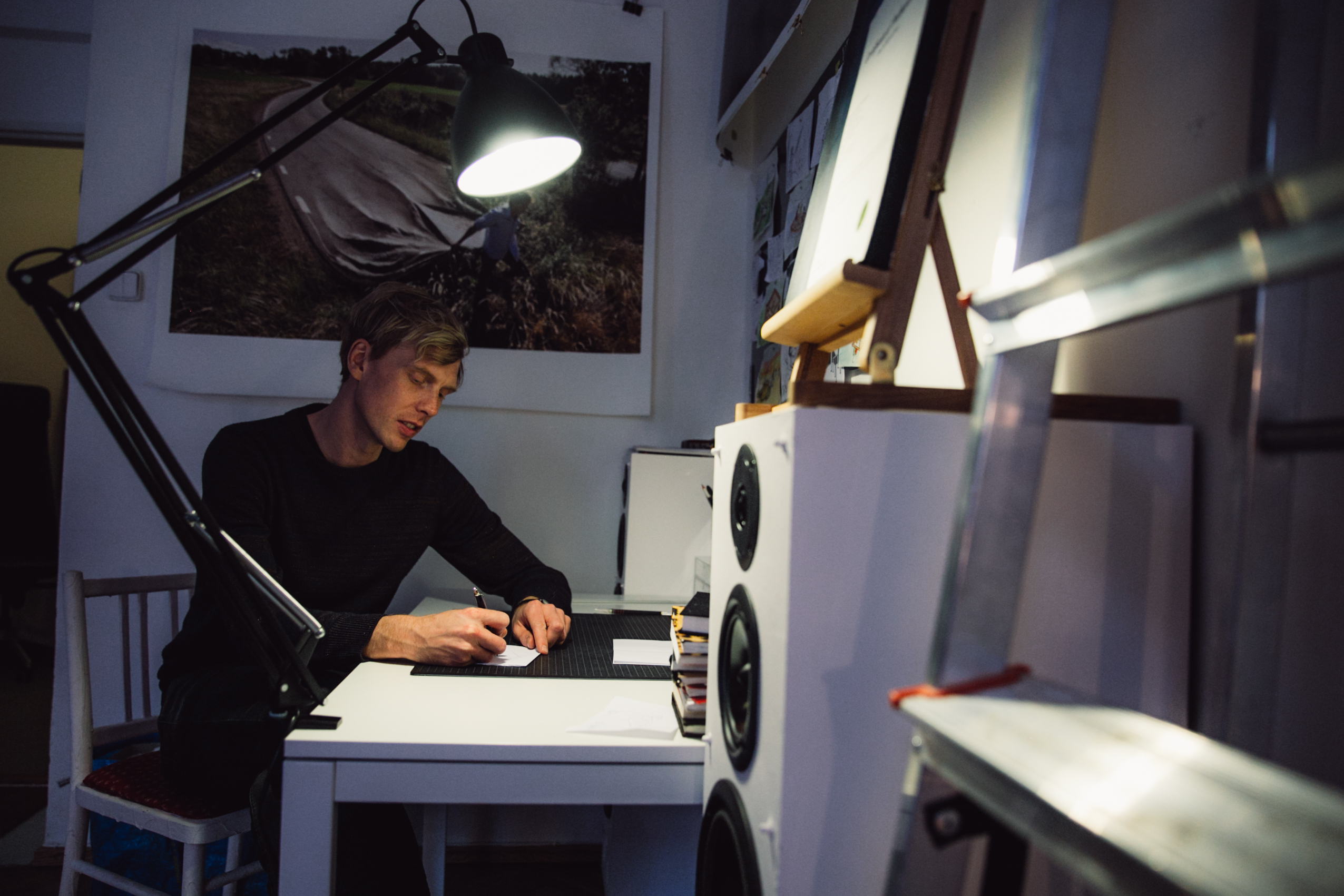 After shooting in familiar places, Erik travels all around the world to exhibit his finished pieces. When we spoke with Erik, he had just returned from an exhibition in Moscow. Many of Erik’s supporters follow his work online, but he said it is especially satisfying to share his photographs in person. “I love tactile things. I love making prints of my work,” Erik said. “Even though I’m really a digital artist in the way that my process works, I really think the end product is something physical.” Erik sells limited edition prints of his work on his website and open edition prints at INPRNT.

He said prints give him more control as an artist. “Print has so much more to offer than screens,” he said. “For example, the way that the colors are represented, you can never really control that on a screen. Everyone’s screen is different in some way. But when you print something, the artist has decided that’s what it should look like. The artist has decided that this is the size that this would be presented in and that this is how you should experience it. I just like that idea behind a print.”

As his work spreads throughout the world, Erik hopes to continue improving. He also enjoys seeing others contribute to the genre and watching it evolve. “I have realized that you never really become satisfied. Being a perfectionist, you always feel like you can develop and become better,” he said. “Somehow I always try to challenge myself with the work and try to create more and more complex things just to see how much I can push myself. The projects tend to become more complicated and harder over time. I hope to see more of this, and I hope that this art form will keep growing.” 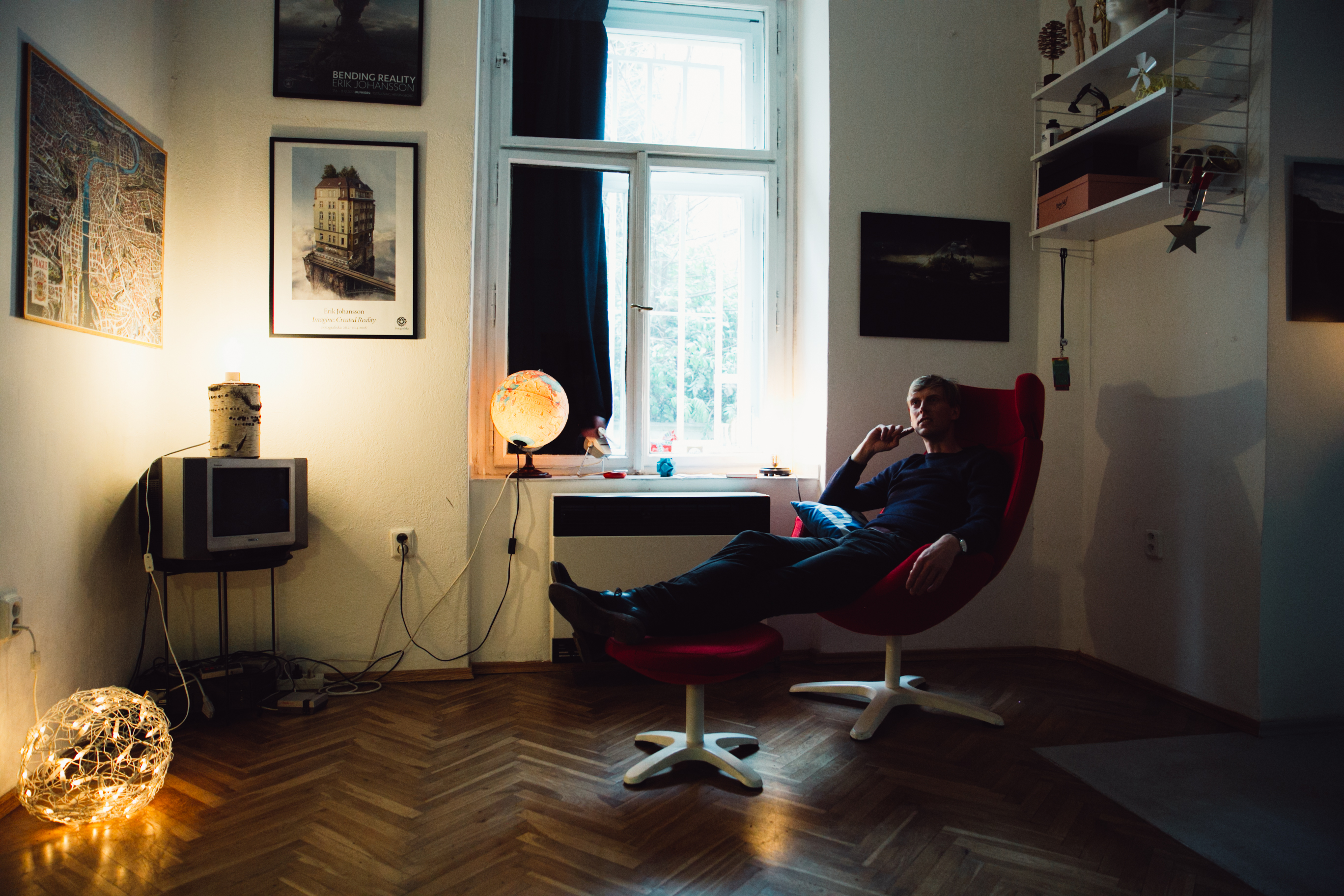