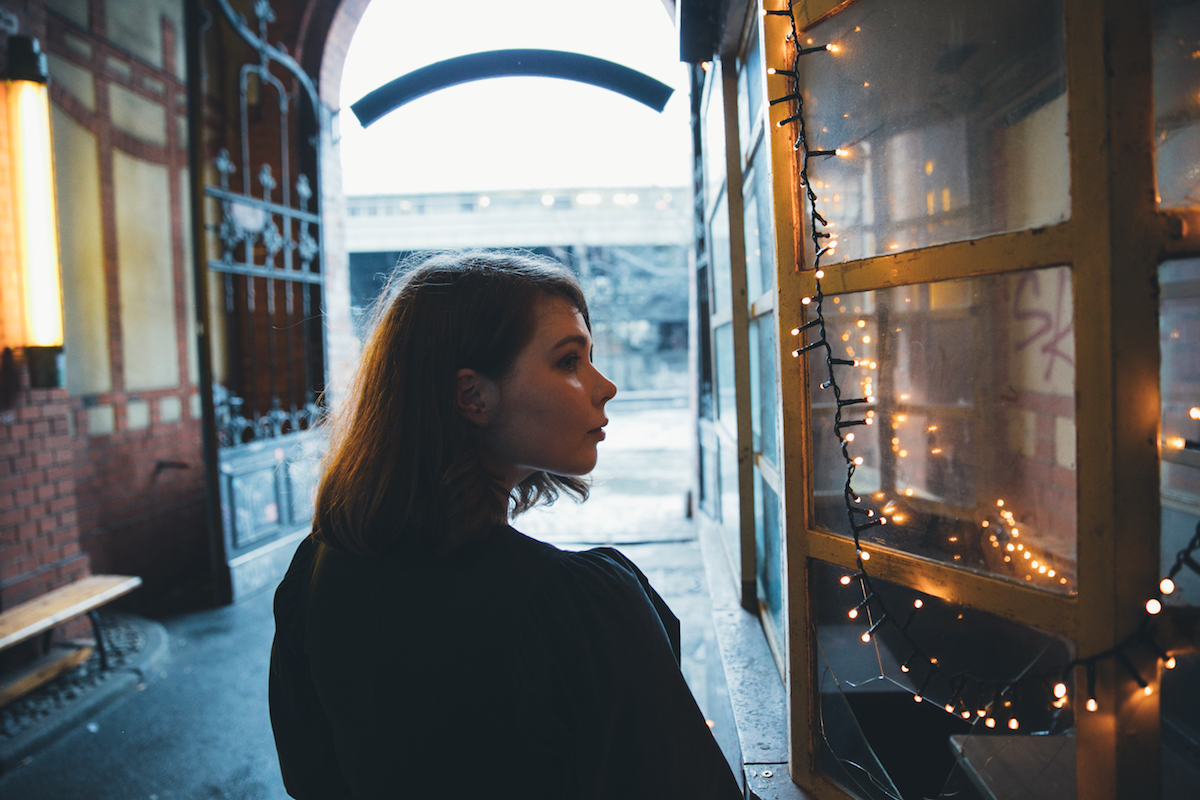 Elena Resko has evolved a lot since she first started out as an artist. For one thing, she moved from her small hometown in Russia to Berlin, Germany. It was a dream fulfilled for Elena and her husband, and it proved to be a positive change artistically as well. “We had a dream to move to Europe for a long time, so we just did it, and we are more than happy," she said. "I didn’t have access to all those artistic things growing up in a very small town, and here there are plenty of them. Especially as an artistic teenager like I was, there were just no events and not a lot of like-minded people, so it was rather hard and that's why I wanted to move to the big city.”

The area where Elena lives is Pankow, a large borough of Berlin. It is a quiet place with lots of greenery, the perfect setting for Elena to create her signature illustrations which often feature nature. “I am a big fan of flowers and plants,” she said. “I think nature is a major inspiration because the shapes and the colors are always so wonderful and so nice, and you could never get anything made by a human this sophisticated.” The other aspect Elena loves about drawing plants is simply how good it feels. She explained, “I don’t think about it, I’m just drawing and it goes very organically and naturally. I so much enjoy the process of drawing plants that it just brings a lot of warmth inside to do this.” 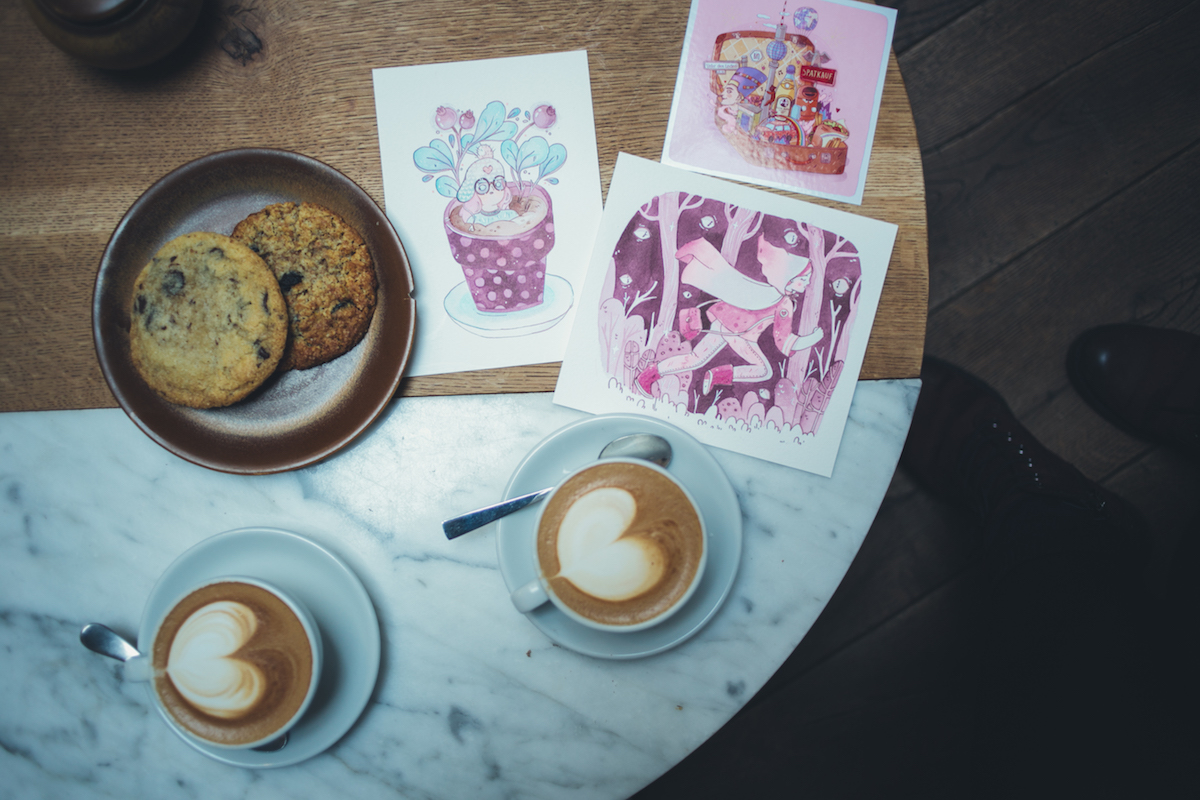 That warmth is an important aspect of Elena’s work because she wants her art to spread happiness. “As I grew up, I realized that the more positive emotions I could put inside my work, the better it would be,” she said. “I don’t think art should be showing something which is not cheering and encouraging you.” Her color palette has evolved in much the same way: “I’m fond of violets and pinks and so on, and I hated pinks in my childhood. I don’t know why. But now I’m using all the things I would never use when I was a teenager!”

Elena also stays positive by having her workspace decorated with meaningful mementos. In her cozy home studio she displays tickets from museums, works by other artists and illustrators, and various things which bring up good memories and feelings of happiness. This space is important to her because she almost always works from home. “It’s just a table in my living room, a small corner with all my things and some inspiration pictures on the wall,” Elena explained. “I have all my things around and I sometimes use bulky things like Cintiqs and so on, and it’s just not convenient to go somewhere."

Having unfettered access to digital mediums is one reason why Elena prefers to work from home. The equipment can be bigger and heavier, but the artistic advantages are worth it to her. “I think digital work is making everything simpler because you can make a lot of adjustments and you don’t need to be worrying about how will it go, will it be spoiled or not or something like that,” she said. “As I don’t have a lot of control of traditional media, I’m always worrying, will it be good or not?”

Taking away that pressure by working digitally is a big relief. And when Elena does use traditional mediums, such as inside her sketchbook, she has an unique way of getting started: on the very last page. “When you are starting on the first page, you are so much obsessed with getting it very nice, because everybody who can open it should see it’s beautiful. But when you are starting on the last page it is much easier,” she explained. From there Elena flips to other pages, filling them in randomly. 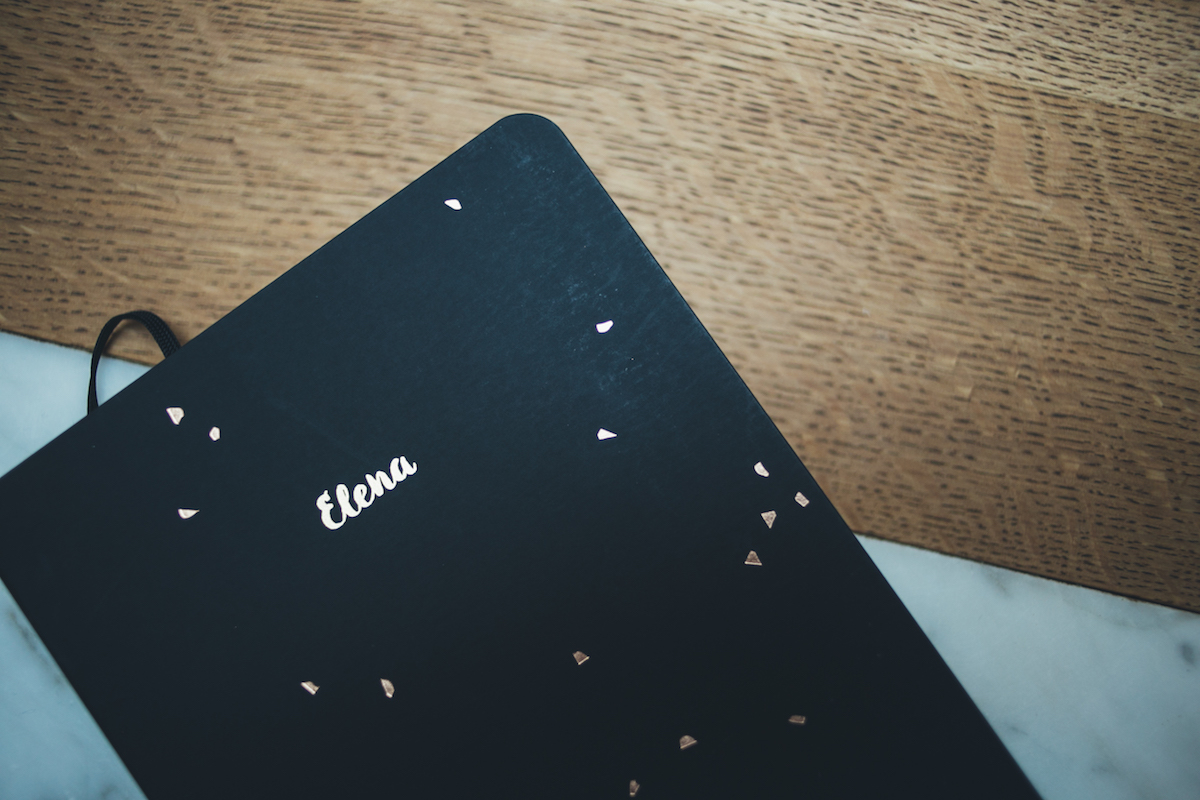 “Sketchbooks are tricky things. I used to think that sketchbooks should be something you can proudly present to an audience and they’ll be like, oh wow, that is so nice and beautiful. But now I understand that it is more like a technical tool,” she said. “You can draw whatever you want. It can be ugly, messy, whatever, but you are trying over there and you are collecting your ideas. Maybe some things you will forget, but then you can look back and see them. You can get inspired for future projects.”

Re-doing older illustrations, like the ones in her sketchbook, is part of Elena's art practice. As she progresses as an artist she becomes more content with her work, which allows her to revisit favorite concepts and ideas. The end result is extra satisfying because she comes to see how much she has advanced. “I’m liking my work more and more, which I think is a normal thing. Then when I’m seeing some older pieces, I’m thinking it can be made technically better, but the idea is still so nice. With my abilities these days, I can do it much more beautiful.”

It’s a useful way for artists observe personal growth that might otherwise go unnoticed. From technical improvements to evolutions of style and theme, an artist is constantly learning and changing. “Sometimes you don’t notice, but all the things surrounding you are just getting inside, and you are growing and evolving as your life grows and evolves somehow,” Elena said. “Maybe sometimes you don’t think about this, but all the things you see make some impact on your style and work and so on." 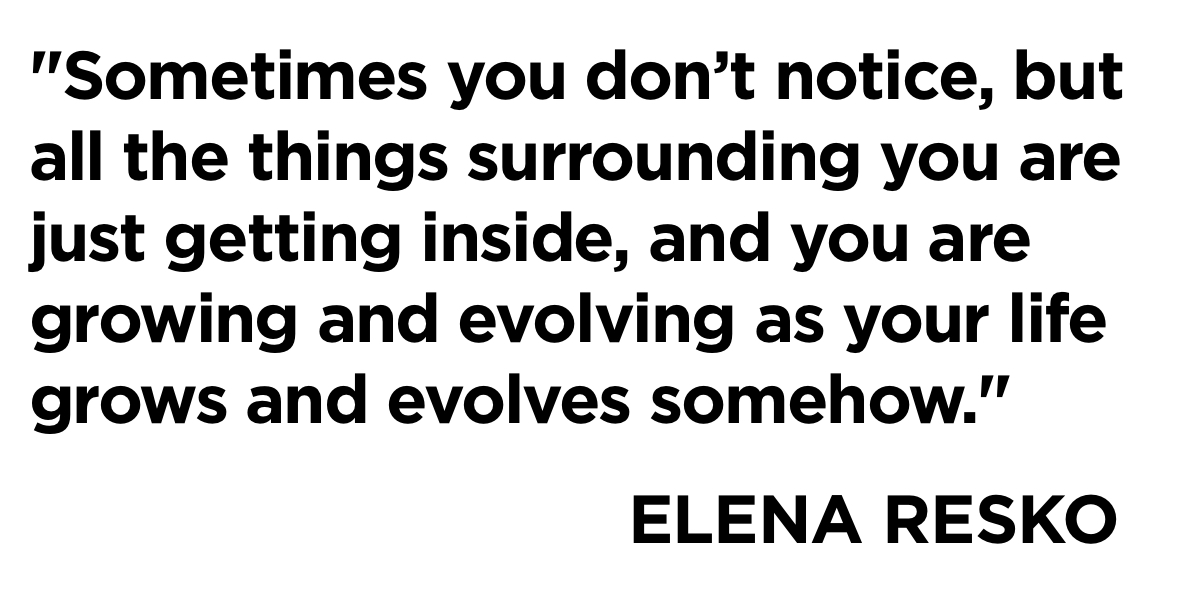 Elena’s biggest change was going from graphic designer to illustrator. She always had an interest in illustration, but she focused on design while attending art school in Russia. “It was a good choice for me because back then I wasn’t sure I could be a proper artist or an illustrator. I was looking for a more technical profession, and graphic design was something I was inspired by at that time,” she said. “It was very useful because it gave me a lot of knowledge in composition. I know how to put dynamics in a picture, I know how to use colors properly.” 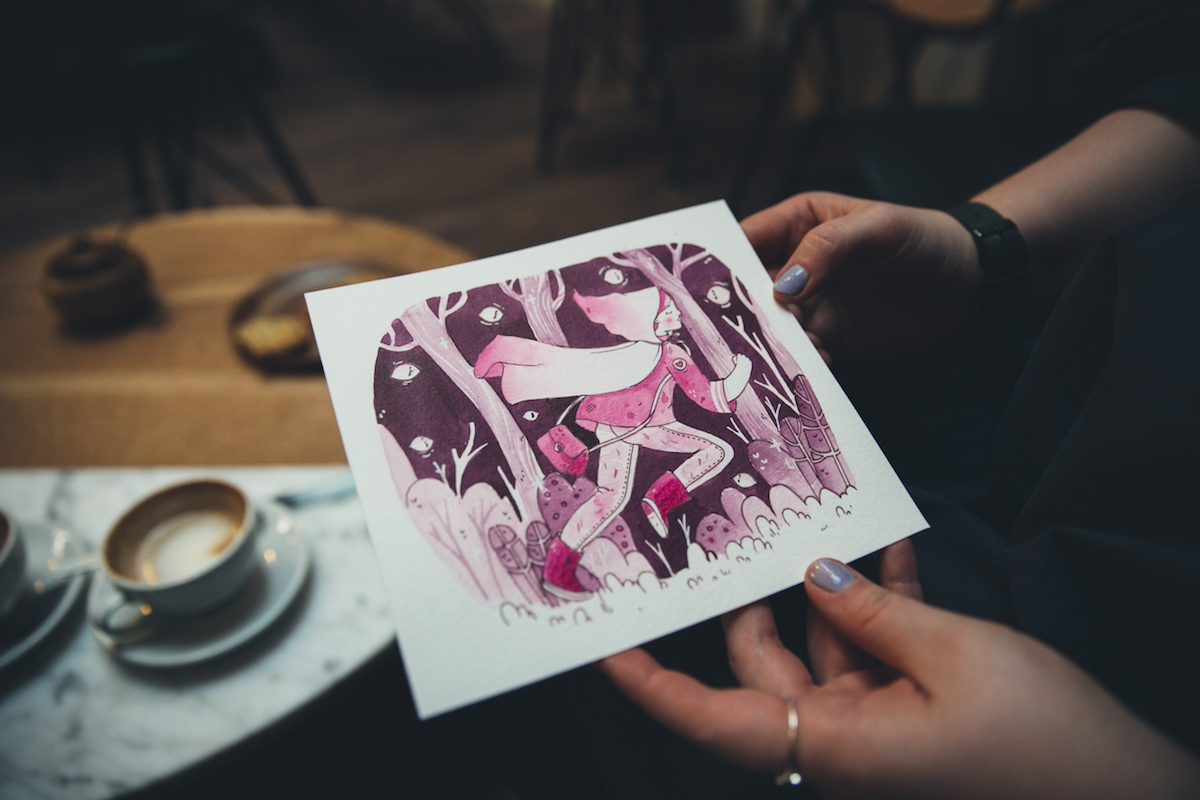 Even with this transition behind her, Elena’s schedule remains very full as a full-time illustrator. Just as she practiced drawing at night while working as a designer, now she makes time for personal work in between freelance assignments. “It’s tough to balance freelance and personal work. When you are so busy with all the working projects, sometimes you are sitting late and you just don’t have any time for something personal. I try to at least do it during the weekend, and of course sometimes in the evening if I have time. I’m basically trying to do it every day, even a bit, even 15 minutes are enough to feel you are doing something," she said.

With barely a moment to spare for personal projects, Elena entrusts INPRNT with running her print shop. What set the site apart for her was the quality of offerings. “I was looking for the best print on demand service which is not offering an overwhelming amount of products. I hate mugs, and I hate carpets, and so on,” said Elena. “I just like beautifully printed prints and cards. I don’t want to see my things on a bathroom curtain or something like that.” INPRNT prints in-house, which means the highest quality reproductions and top earnings for artists.

All of this is important to Elena because managing a busy schedule is part of being a creative professional. She tries to follow a daily routine; without one it becomes difficult to get everything done that needs to be done. “I try to work normal working hours from morning till evening, sometimes a bit later if I have a lot of work. But I also enjoy doing things like going outside for several hours in the middle of the day just because I want to, and then working in the evening. It’s a very nice thing for freelancers to have this type of freedom.” 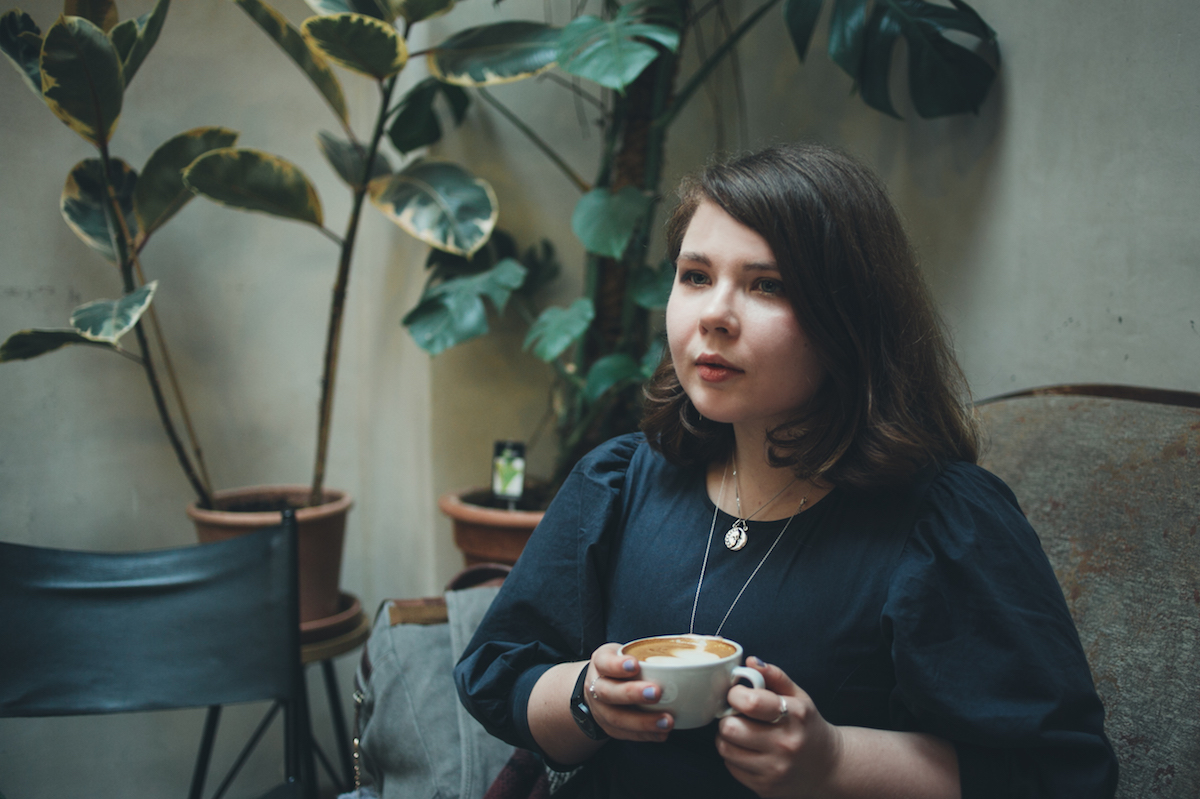 Having this flexibility while being able to follow her passion makes Elena’s career very fulfilling. “The best part of being an artist is that you don’t actually have a job. You’re having a day-long adventure in your drawings and illustrations and other related work,” she mused. Elena also loves to get out of the house and explore her surroundings for inspiration. She especially enjoys browsing comics shops, where she’ll look for “something which really sparks from the shelf.” Once she finds it, she tends to take it home and read the entire thing immediately.

Another major inspiration for Elena is food. “Food is something I’m very much addicted to! I’m very much fond of trying a lot of new things connected with food, like going to new places and trying something new and exotic and so on,” she said. Food as a subject complements Elena's theme of making artwork that makes people happy or has positive associations. A closely related inspiration is her love for coffee. “Coffee is something that you can prepare in so many ways, you can try so many tastes and it just gives you such positive energy. That’s why I’m really obsessed with it!”

She also relishes the opportunity to check out new cafés. Each one provides fresh scenery and distinct flavors, plus great people-watching. “I very much like hanging out in coffee shops. I’m spending a lot of time in different places, trying new things, and I think it’s my fuel actually,” she said. “Every time you are visiting any place, you can observe a lot of things. You can watch people, you can see some new situations happening. Just maybe you can process some things in your mind, and that’s why it always gives some bit of inspiration.” 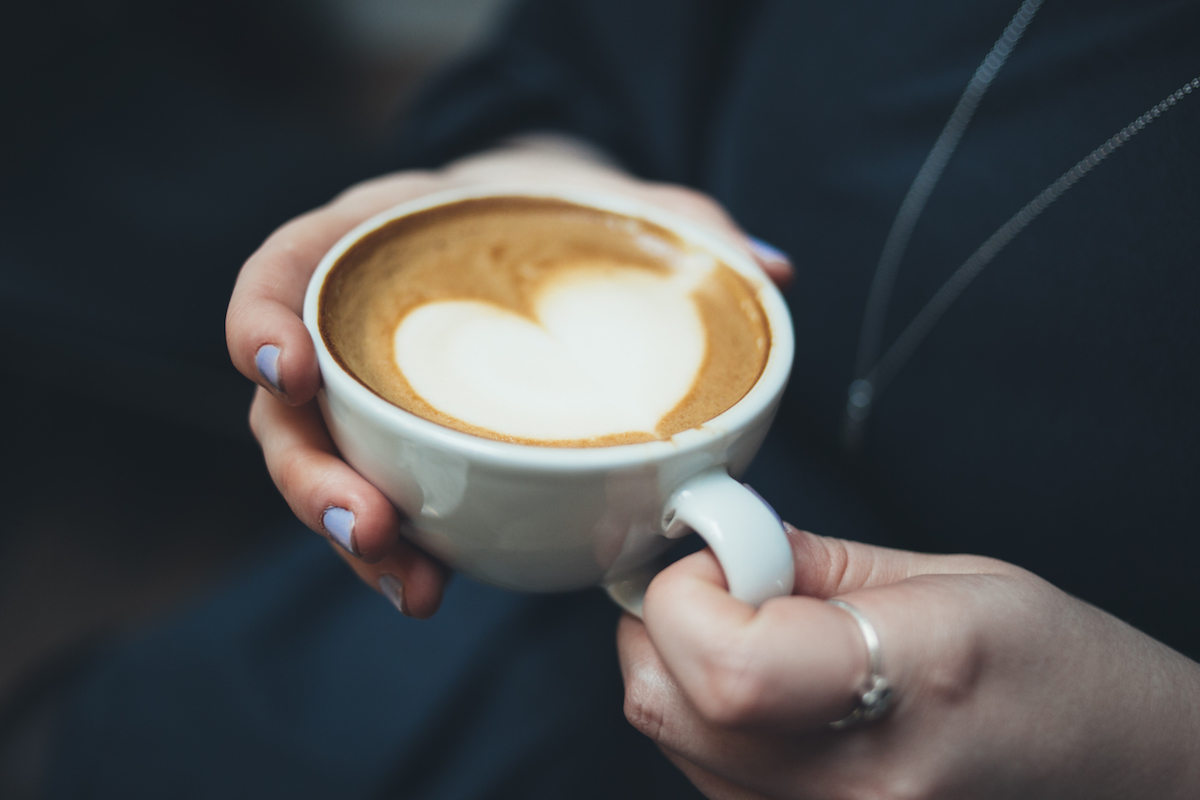 It’s all part of the lifestyle Elena has created for herself as an artist. Whether she is working from home or soaking up new experiences in the outside world, everything Elena does is dedicated to her growth as an illustrator. “If you want to grow, you need to do things all the time. Nothing will happen if you’re just sitting and doing nothing and wondering when will I be successful or good or something like that," she said. "You just need to do something. Even if you’re tired and not in the mood, you just need to take this pencil and go and draw!”