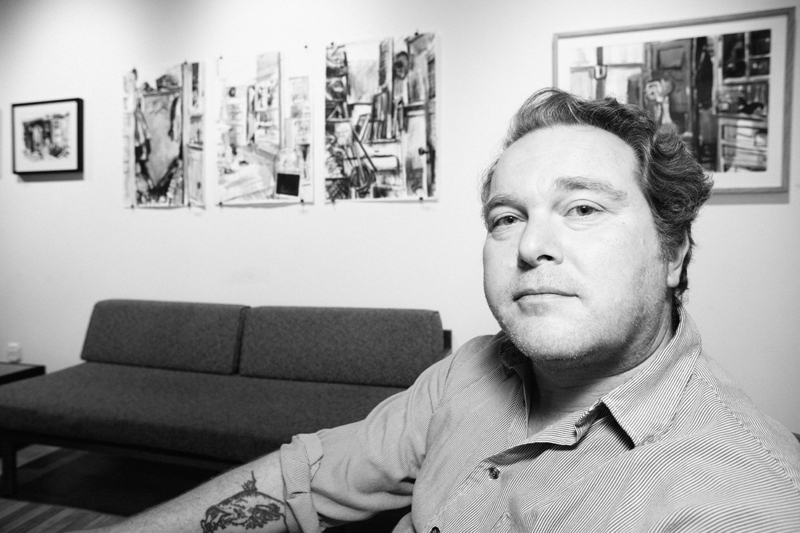 Photo by Paul Germanos, courtesy of Dmitry Samarov
Dmitry Samarov's artwork often intersects with creative worlds from music to literature, whether he is sketching a live band or writing stories to go with his paintings and drawings. Most of all, his artwork reflects real life. Using traditional mediums from the driver’s seat of his taxi cab or inside familiar haunts like his favorite bars and coffee shops, Dmitry’s work offers personal insight into his life in Chicago.
He has called the city home for decades, its unique landscape and culture shaping his artwork along the way. For many years Dmitry spent up to sixteen hours a day behind the wheel of his Chicago cab, becoming intimately acquainted with the urban environment and its inhabitants. His artwork usually comes together on the fly, capturing the essence of specific people, places and moments in time.
His preference is to draw and paint from life, enjoying the challenges of shifting light in the environment and human subjects who constantly change and move. “Everything moves and everything changes all the time,” he said. “My job in the world is to watch and listen." He sees the artist as an observer, a role that feels comfortable and familiar after becoming a taxi driver to make money while pursuing his art. With his face turned away from his passengers, Dmitry felt himself becoming invisible, "a part of the furniture.” He discovered that when people were in his cab, many of them felt free to engage in unfiltered speech or behavior as if he wasn't there. Sometimes his art seems equally straightforward in the way he expresses every last detail, even painting a single, brightly-colored fast food sign far off in the distance of an otherwise-idyllic Chicago night scene. 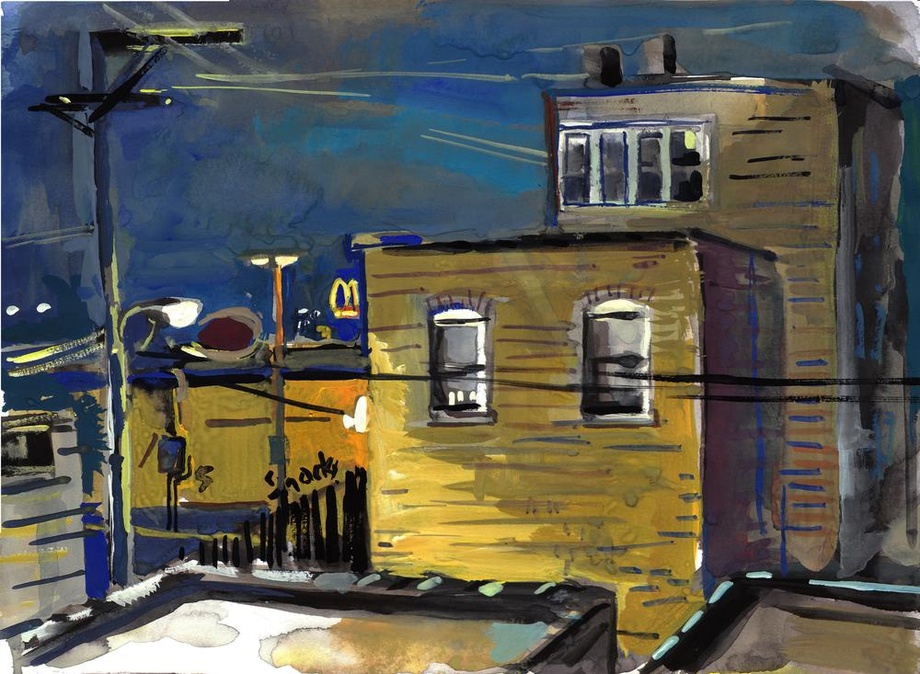 The city serves as a favorite subject and muse for Dmitry, as well as his home. “I’ve lived in cities all my life,” he said, “so it’s really the only thing I truly understand or love.” These days Dmitry lives in the Bridgeport neighborhood of Chicago, which he describes as ever-changing and vibrant, with a diverse population of all ages. From his home in Bridgeport, Dmitry is steps away from his favorite coffee shop and the bar where he now works. He usually doesn’t need to walk more than a couple of blocks to get to where he wants to go, but even with a short commute he continues to find the city as compelling as ever. “It never ceases to show a new thing to me,” he said. “Almost every day I find something new here.” 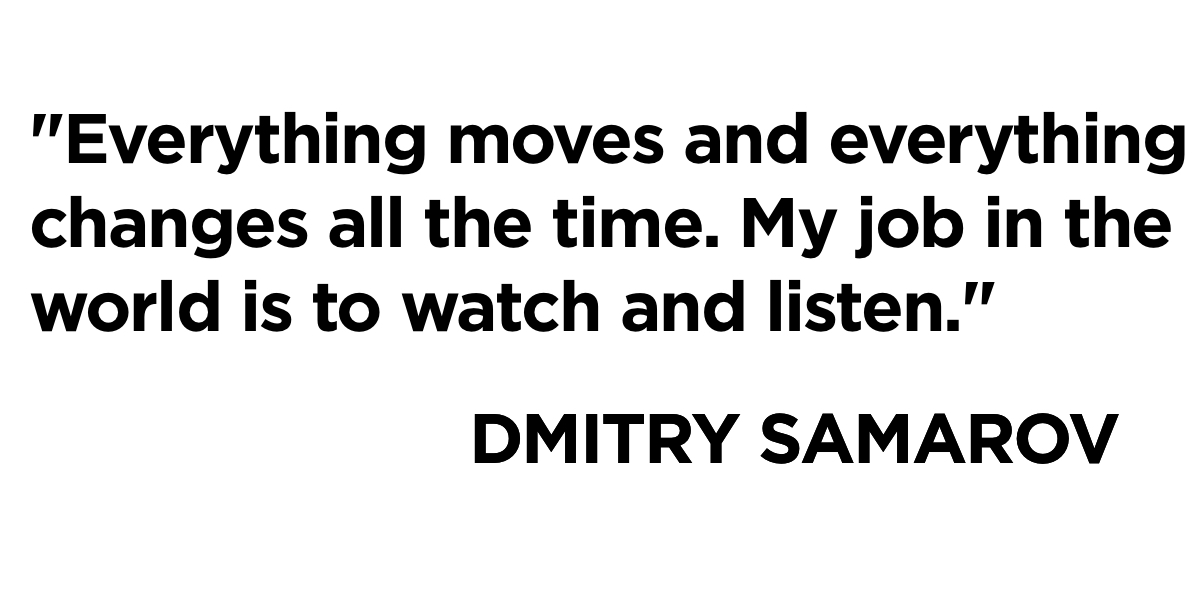 Along with making the city a theme, part of Dmitry’s signature style comes from his color palette. When he attended the School of the Art Institute of Chicago in the 1990s, Dmitry started to use a simplified palette of only primary colors along with black and white. It's a practice he continues to this day. He thinks of the six colors he uses--red, yellow, black, white and two shades of blue--like the six strings on a guitar. Just as a guitarist writes a song using only six strings, Dmitry relies on his palette of six colors. It brings cohesiveness to his work, yet he is able to mix any color he wants. The result is distinctive and uniquely his own.
Dmitry’s work is exhibited in venues across Chicago. One recent show took place at Hume Gallery featuring his paintings of the three local bars he knows best: Rainbo Club, Skylark and Bernice’s Tavern. Chicago is rich with creative and artistic events like these, and Dmitry attends them frequently. He enjoys listening to live music, often painting or drawing the band on the spot. He also attends readings and other literary events, a fitting activity for an artist who is an accomplished writer as well. Dmitry is a contributor to Chicago’s alternative newspaper, the Chicago Reader, covering art shows, theater and cinema. He is also the author of two books, Hack: Stories from a Chicago Cab and Where To?: A Hack Memoir. 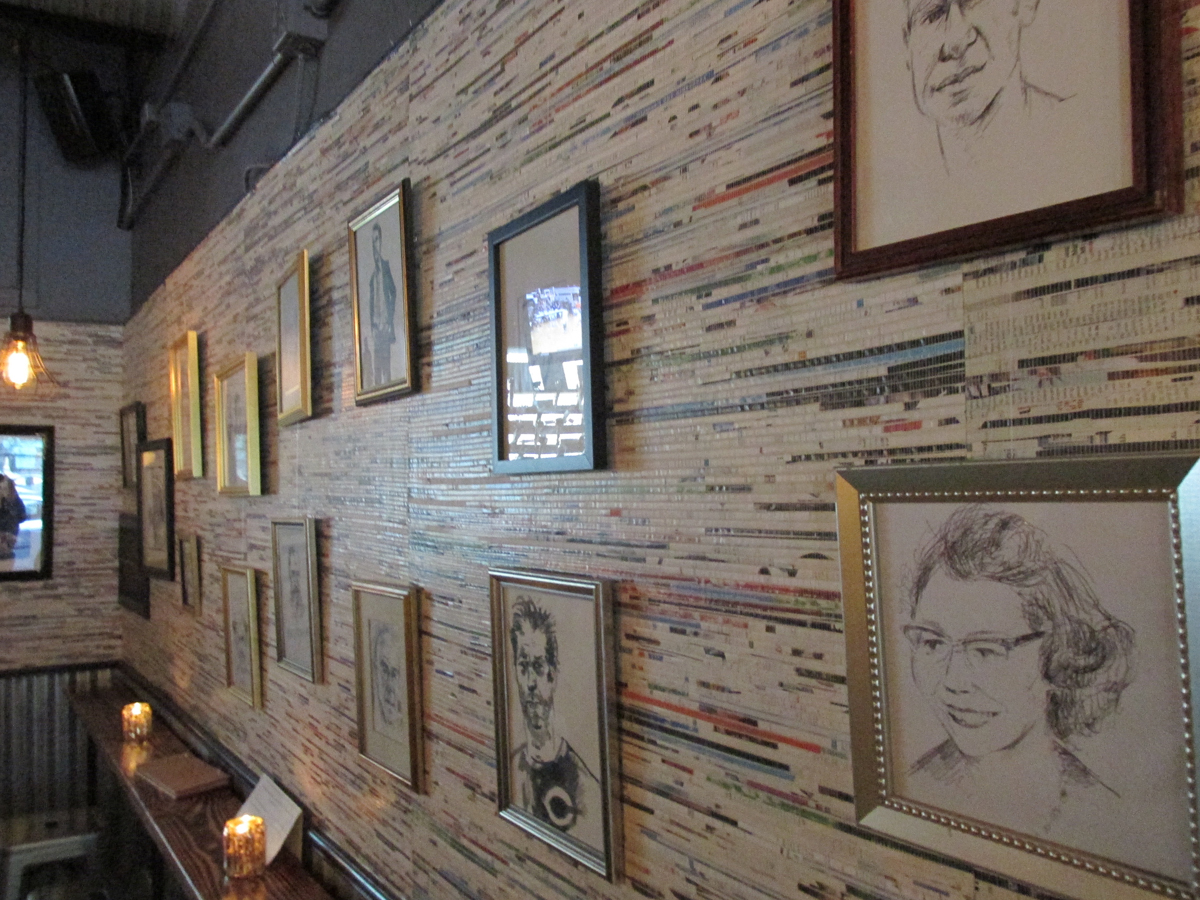 His books are non-fiction based on his own experiences, often the same ones he encapsulates in his paintings and drawings. “I never took a writing class or had any ambitions for writing until I started driving a cab. What happened was people would just get in and launch into their stories or do something weird, and it would just keep gnawing at me," he explained. "I had to start writing it down.” His artwork illustrates the text of his books. From the story of his bumbling first fare when a disgruntled passenger had to give Dmitry directions to the airport, to late-night noir courtesy of drunken revelers spilling out of the bars as they closed, his stories and pictures are inseparable parts of the whole. Dmitry has pushed the boundaries of his work even further by incorporating his writing into music and video. He recorded a spoken word album of his stories over an improvised musical track featuring guitar, drums and bass. In a series of videos, he narrates as he paints or draws the subject matter at hand, the artwork seeming to pour out from him in an effortless way. 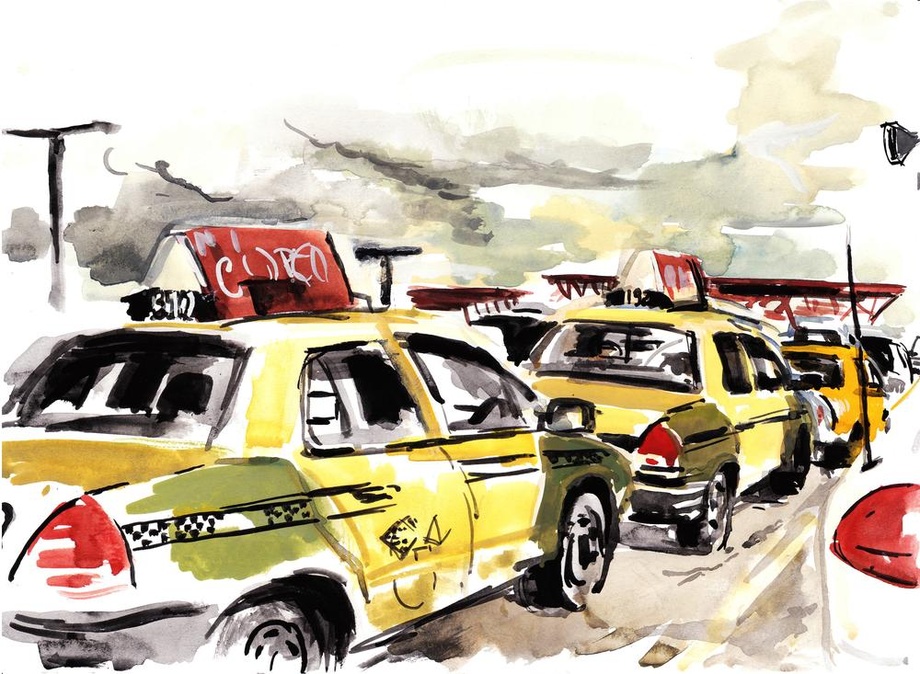 The road to book authorship seemed almost as easy as sketching a scene. A major publisher found Dmitry’s blog and Twitter account, where he frequently posted his art and observations, and saw the potential for a book. They approached him with the idea, and after two years of editing, Dmitry's first book was published. But these days he no longer uses any form of social media. Instead he prefers to work on his own expansive website and publish a weekly newsletter.
He also turned in his smartphone and exchanged it for a simple flip phone. “I love leaving the house and not having the internet following me around,” Dmitry said. “It’s like waking from a dream; it’s like here’s this whole world that I don’t have to filter through a tiny screen in my hand.” Dmitry would rather carry a sketchbook instead. “I always have a sketchbook, I feel naked without one. I don’t go anywhere without my sketchbook, so at any given moment I can draw something," he said.
Having a range of tools and supplies to work with also enhances Dmitry’s artistic output. He finds that switching mediums helps him when he needs inspiration. “That almost always works for me," he said, "because it just scratches a different kind of itch, it gets you out of whatever rut you’re in.” He thinks that a lot of his work does not meet his own standards, but by producing a large volume he ends up with a few favorite pieces that he likes. He has been selling prints of select works on INPRNT since 2013 and said it has worked out really well for him.
“Being an artist is just a nonstop hustle,” said Dmitry. “I have to make my living from a million different sources all the time.” That hustle has inspired much of his work, sketching from inside his cab or observing customers while tending bar. He has made his mark by sharing those experiences with the world as an author and artist. 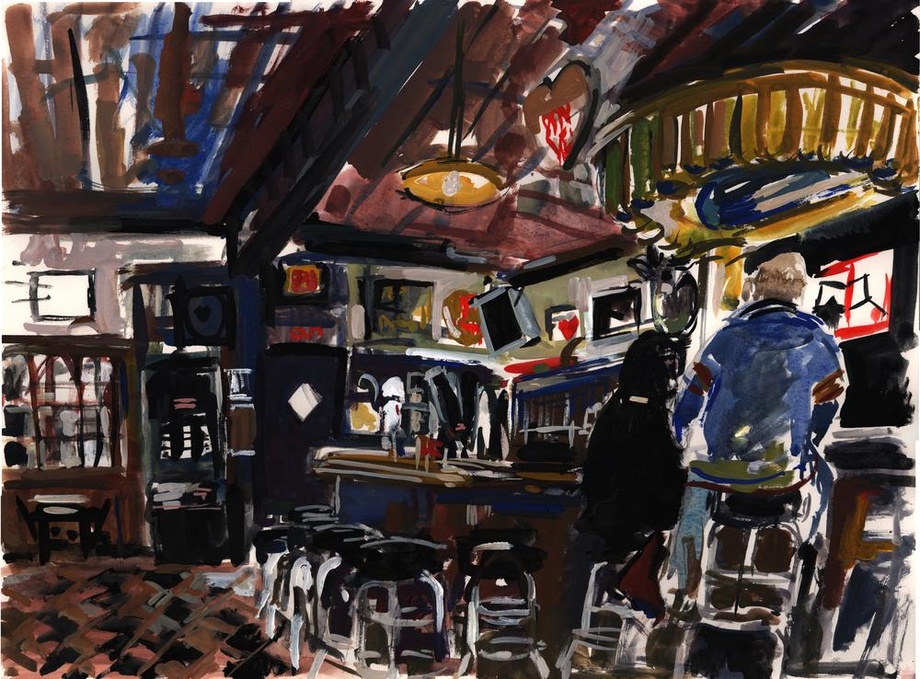