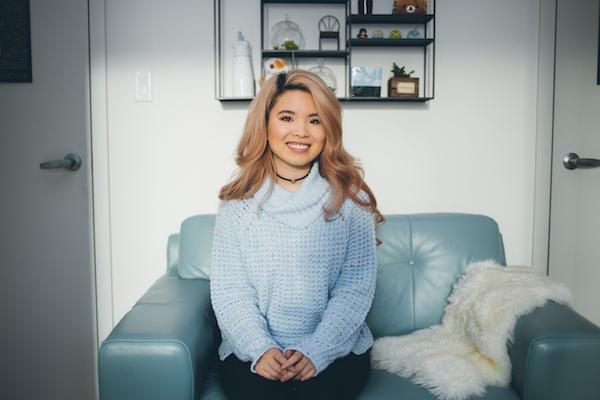 Although Alice Yang did not always know she would become an artist, she had always loved to draw. “I wanted to go to art school,” she said. “My parents wanted me to consider something more practical.” Alice found a balance by attending the University of Pennsylvania, where she earned her BSE degree in Digital Media Design. The major combined computer graphics coursework with fine arts classes through UPenn's art and design program.
Fresh out of college, Alice took a job as a software engineer at Electronic Arts in San Francisco. Continuing to draw in her free time as a hobby, she decided to try design work as a bridge between software engineering and illustrating. Alice started working as a freelancer for a start-up, which led to a full-time position as a product designer. Eventually, she realized she wanted to focus completely on her art. 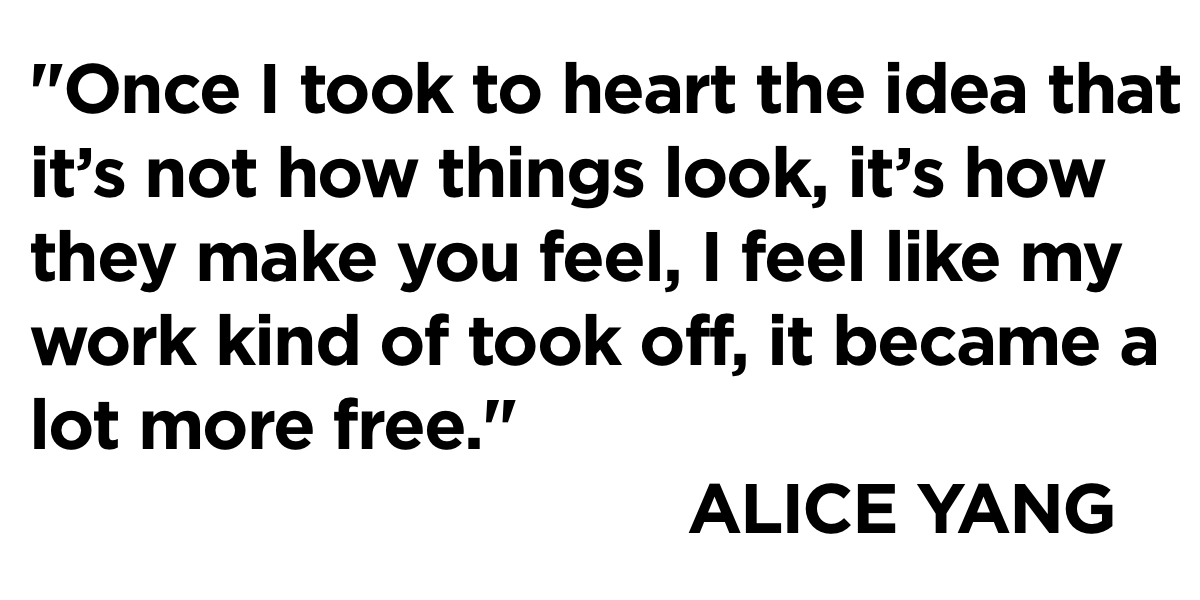 She began taking classes at the Animation Collaborative, where she was taught by working Pixar artists. One lesson led to a breakthrough that changed the way Alice understood her work. “When you design a character, what makes it appealing isn’t how pretty or attractive it looks. It’s how it makes you feel,” Alice said. “I was very preoccupied with the notion that art has to look good, that characters have to look pretty. It was kind of a limiting perspective. Once I took to heart the idea that it’s not how things look, it’s how they make you feel, I feel like my work kind of took off, it became a lot more free.” 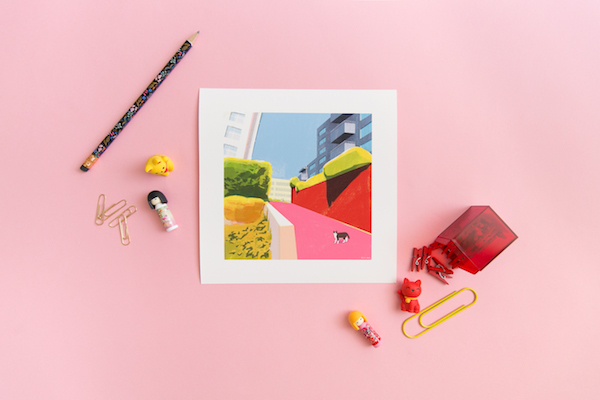 That’s when Alice created a piece called Street Cat. “This was the start of my style,” she said. “It seemed like it resonated with a lot of other people as well.” Encouraged by the response, Alice decided to offer the work as a print on INPRNT. "When I looked into it a little bit more, INPRNT was what the more professional artists chose as their print on-demand service. INPRNT had the best rate split,” Alice said. Around this time she was accepted to an art mentorship program where she worked with fellow INPRNT artist Meg Hunt. As the program wrapped up, Alice met a recruiter from Uber who was looking for illustrators to expand the company’s branding. Alice got the job and has been on staff at Uber as an illustrator since last year.
At Uber, Alice works as part of a three-woman team comprised of herself, a senior illustrator, and a producer. “We kind of function as an agency within the larger company,” she explained. Other teams at the company come to them for a wide range of illustration projects. The producer schedules and prioritizes them, and the illustrators tackle them one by one. “The nice thing about working in this kind of format is the variety of projects we get,” Alice said. “More recently I’ve been working on Snapchat filters for Uber where if you look into the app, you’ll be able to unlock specific filters that are only available while you are on a ride.” The filters reflect everything from the Uber brand to holidays and sports events. 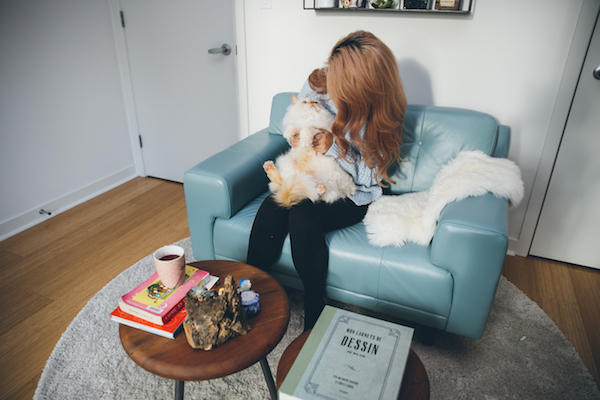 Alice has found her background as a software engineer helpful as an artist in the field of technology. “One thing about computer science is that it forces you to break down problems into more atomic units, to solve them from the ground up, methodically,” she said. “I carried that over to how I approach illustration projects. I do illustration, but in the tech industry. I knew what mattered to project managers during interviews; my portfolio included artwork and data.” Alice has also been inspired by the blending of tech and creativity at events like Adobe MAX, which she attended as the guest of an Adobe Creative Resident. “There were a lot of lectures on different Adobe products and they featured a lot of software that was still kind of in development or cutting edge, so it was very exciting to see all the possible things we would be able to do in the near future.”
Technology also helps Alice connect with other artists. “One thing that I missed from not going to art school is the sense of camaraderie with your fellow students, like you all struggle, you all pull all-nighters, you all watch each other develop and grow artistically. Having that community online offers kind of a similar experience where you can see each other improve and cheer each other on, and it has definitely given me a lot more motivation to work on my own craft.” Alice’s friends organize events like art swaps, where groups of artists exchange artwork and other goodies in themed care packages. “Even if you’re not that entrenched in your local art scene, Twitter enables you to reach out and be connected to peers and other artists,” Alice shared. “It’s given me a sense of belonging when I, at one point, found that kind of lacking being in tech.” 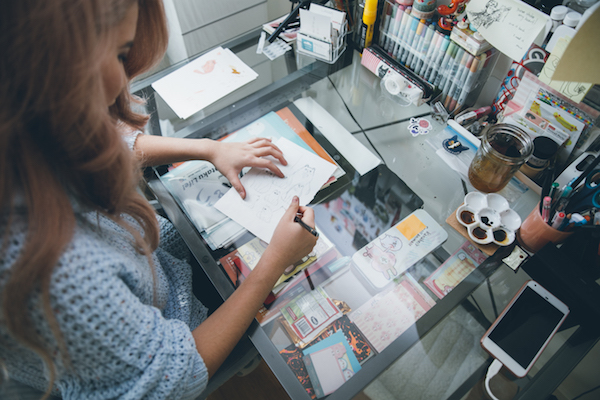 Today, Alice works on personal projects to continue learning and growing as an illustrator. “For a long time I had been drawing whatever came to mind,” Alice said. “Even though I was outputting a fair amount, I wasn’t really improving. I wasn’t taking the time to examine the areas I was lacking in and working on that. Once I started being more critical of my own work and started trying to get better at specific areas at a time, my style started to develop, my quality of work started to improve.” This summer, Alice will work with other artists to mutually sharpen their skills when she participates in Light Grey Art Lab’s Iceland art residency. “It’s going to be a week-long trip where we travel with several other working professionals in different fields of art, and the goal is to spend a week appreciating the beauty that is Iceland, and exchanging life experiences and holding workshops on areas that we’re interested and proficient in.” 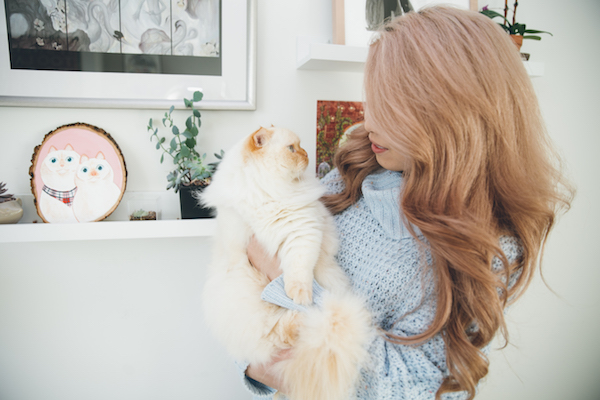 After the trip she’ll return home to her San Francisco studio, which is decorated with potted plants and colorful books and toys. Much of her space features artwork by friends and fellow artists, including a painting of Alice’s cats which she received as part of an online art exchange. The two cats, named Mochi and Marshmallow, are ever-present in her studio and they inspire much of her work. “One thing that I’ve started to learn over the years is if you really love something, and you keep drawing that subject, it shows in your art and it sets you apart," she said, recalling a poem by Rupi Kaur that urges artists to keep their work honest.

These days, Alice’s work is more authentic than ever. “There was a period of time where I wanted to draw things that I thought other people would like, kind of like chasing trends or seeing what’s popular and trying to draw that,” she said, "but in more recent years I really internalized the idea that everyone views the world through the lens of their own experiences, so as an artist, the work that you create should reflect that.” 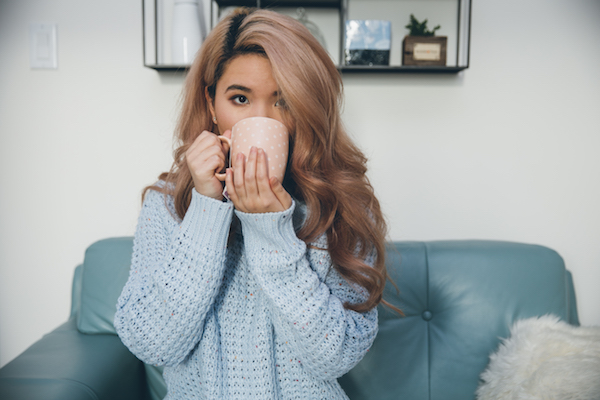