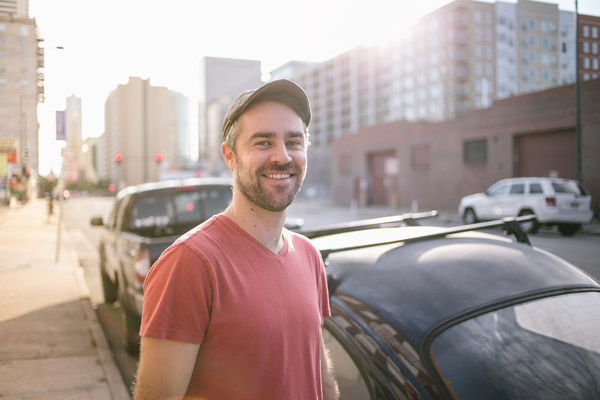 The foundations of Jeremy Aaron Moore’s professional art career were placed way back when he was a child growing up in Cortez, Colorado. But his path from being a kid who loved to draw to becoming a full-time artist with a roster of clients wasn’t a straight one. After participating in a competition for young artists in high school, Jeremy attended Rocky Mountain College of Art and Design to study illustration. But he became disillusioned when he realized that most of his peers weren’t finding work in their fields after graduation. “I have nothing against art school as long as you have the money. I went and learned a lot in art school. But there’s a lot of really great alternatives available now,” Jeremy said. He would encourage young artists today to take workshops or even reach out directly to their favorite artists to learn right from the source. Jeremy's advice for young artists is, "Get a sketchbook and fill it up, get another sketchbook and fill it up until you have 50 of them.” 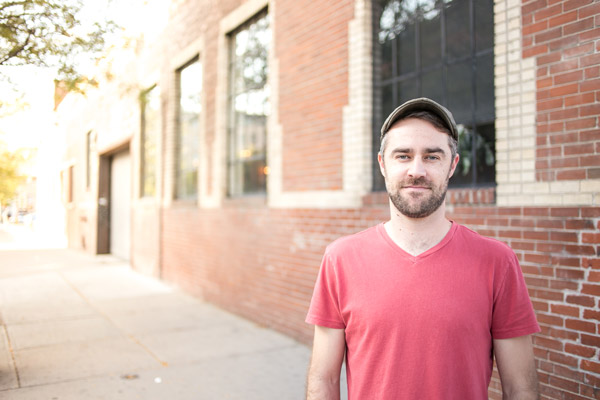 But back then, Jeremy wasn’t sure what he really wanted to do. So he left school and became a cave guide. “I’m really into outdoor stuff,” Jeremy said. “I grew up where it was pretty much required to go rock climbing, hiking and rafting. Being in Colorado is awesome for that.” While Jeremy didn’t make any art during this time, he wasn’t done with creative pursuits. In 2005, he went back to school at Fort Lewis College to pursue a degree in art education with an eye to being a teacher. But Jeremy yearned to make his own art. “I tried to get away from it, but I can’t. I tried to teach, but I just couldn’t do that. I can’t really do anything but this,” Jeremy said of becoming a professional artist. 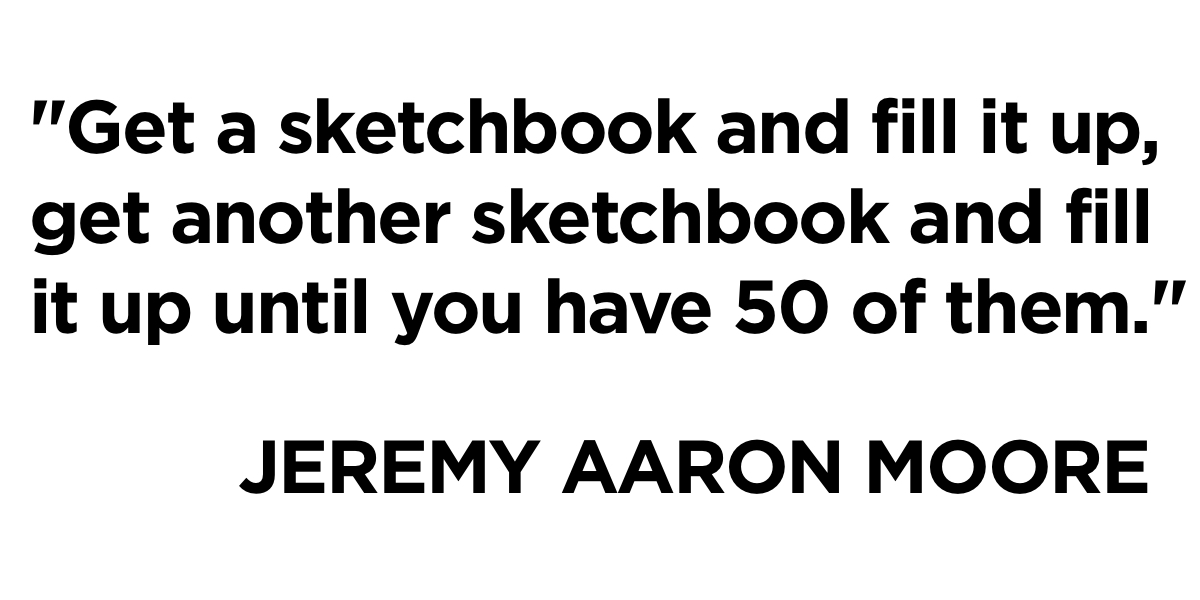 In the past, Jeremy had mostly focused on painting, working in acrylics and oil. But it was around this time that digital art was really taking off and once Jeremy got hooked on it, he couldn’t get enough. One of the first digital artists that really inspired Jeremy was Jason Chan. Followoing Jason was also how Jeremy found INPRNT, where he now sells prints of his own work. Eventually Jeremy switched to doing digital art full time. And while he sometimes misses the tactile nature of painting, he doesn’t miss cleaning brushes. Over the years, Jeremy continued to build his portfolio and started freelancing for various clients. He learned the stuff that they don’t teach you in art school, mostly about the business of art. “When I started out, I didn’t know the difference between what was popular and what was being bought, what’s marketable and what will sell. I had to find a target market,” Jeremy said. Now Jeremy works mostly with clients in the publishing industry and pursues his own art on the side when he has time. And when Jeremy needs a break from the studio, he heads outside to work on his vintage cars. A few years ago, he bought an old Volkswagen bus that broke down on him almost immediately. He learned to fix it himself, which turned out to be a sort of zen experience. “The confidence that I got from learning how to take apart and put the engine back together was huge,” Jeremy said. “I thought, maybe if I can do that, I can figure out how to make this career work." 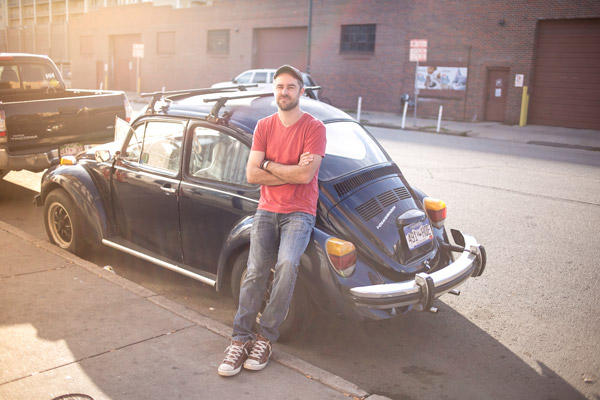 Jeremy is heavily involved in the local art scene in Denver, where he now lives after having resided in Portland, Oregon. He recently moved into an art studio in the RiNo district, an up-and-coming area with lots of galleries, breweries and other craft businesses. “In Portland, the music and art scene is so cool. It’s saturated with artistic types,” Jeremy said. “With Denver, I’ve kind of been waiting on it. Out of nowhere this last summer there was this growth of murals and artwork. There’s a really cool scene happening here.” And Jeremy has been a part of that growth. He runs a group called the Denver Illustration Salon, which began three years ago with a few illustrators and now has 2,000 members who are artists of all types. The group meets regularly to sketch together, often at some of the local galleries. The community Jeremy has found in the Denver Illustration Salon has been invaluable. And so has the one he’s created at his new shared art studio. For years Jeremy worked alone out of his home, often in the basement. But having a space to go to has been a real game-changer. “Having a studio is really nice. I have some studio mates that are really cool, friends in town who are also illustrators to bounce ideas off of and get feedback,” Jeremy said. “As an artist, working from home can be a struggle. All of those years, I always thought that would be the best part.” 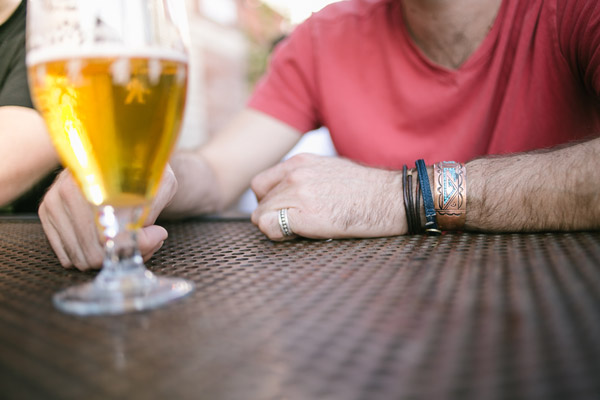 It turns out what Jeremy really loves is being able to work for himself, especially the flexible hours and control over which projects he takes on. But being a freelancer has its challenges too. “It’s a little different than I thought it would be. It’s more of a job,” Jeremy said. “It was always kind of a false summit. There’s always so much work to do to go higher.” To stay on top of his game, Jeremy is always looking for inspiration. He finds it in all sorts of places, like the podcasts One Fantastic Week and Your Dreams My Nightmares by one of his favorite artists, Sam Weber. Jeremy also finds inspiration scrolling through digital portfolios of fellow artists or attending trade shows like Spectrum Fantastic Art Live or Comic Con. And when the muse just isn’t coming? “I bang my head into the wall. I just keep working,” Jeremy said. 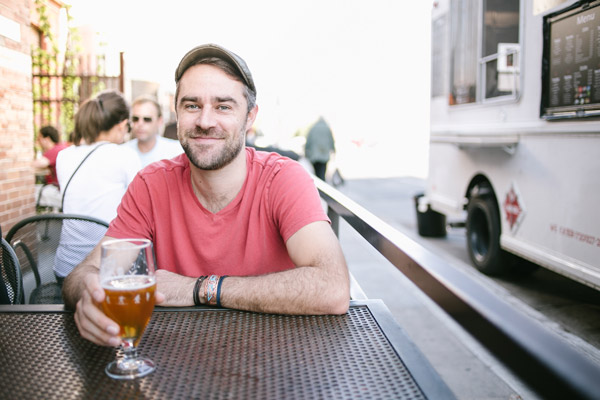 Whatʼs even more wickedly good than Halloween candy? Spooky art prints you can enjoy year round! Celebrate with ghosts, ghouls, goblins and witches that perfectly capture the "spirit" of the holiday. And don't forget to pick up some art cards for your friends and family—the sugar-coated sentiments you write inside will satisfy their sweet tooth and leave them spellbound! Plus, you'll enjoy scary-awesome savings when you get multiple cards. No tricks here, just the chance to stock up on archival art cards that will still look hauntingly beautiful for decades to come... with vibrant colors that wonʼt fade, even when you're in your grave! Featured art by Lane Brown, Greg Abbott and Kali Ciesemier 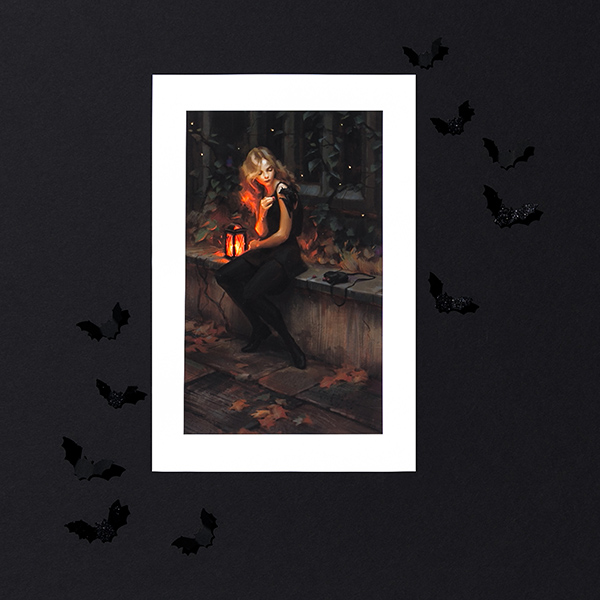 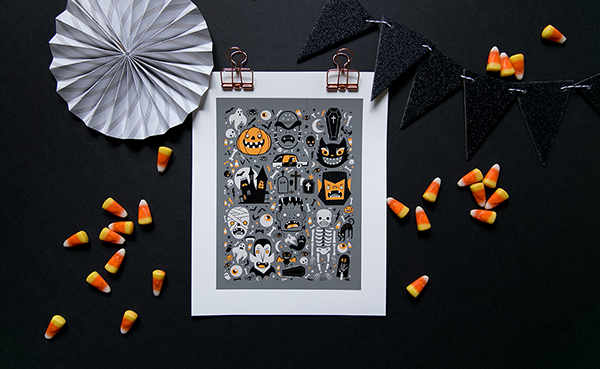 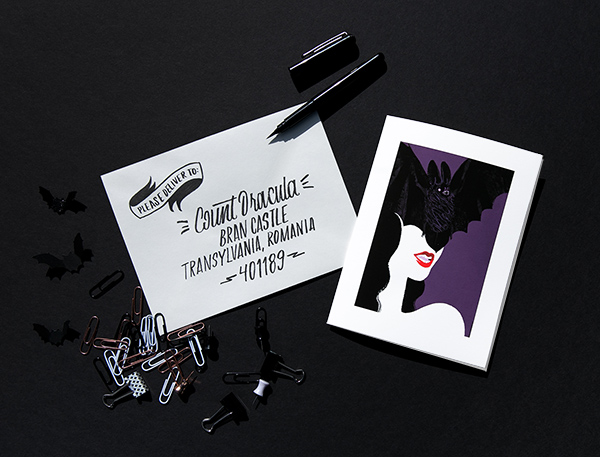 Energize Your Home With Art and Color

Decorate your home with art prints using these traditional concepts. They assign power colors to each room to maximize health and happiness, so you’ll get a boost from enjoying your favorite artwork, along with the benefits associated with the colors you love! Freshen up your home with lively colors, lift your mood and energize your space today.

Yellow is a powerful color for your kitchen. It’s sunny, cheerful, and can even fire up your metabolism! Prints related to food will encourage appetite and inspire you to create beautifully artistic meals. With a vibrant Art Deco style and Food and Drink motif, Roaring 20s by Kali Ciesemier adds the perfect pop of yellow to your kitchen. 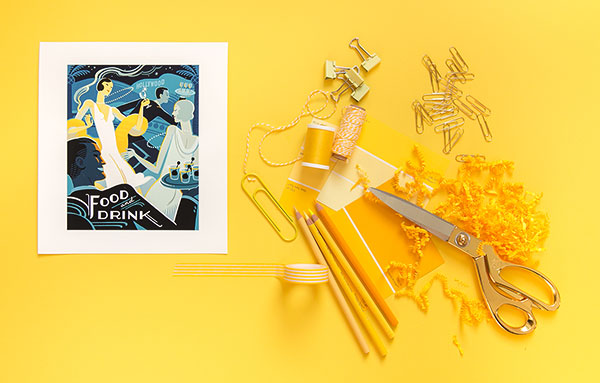 The color red is a sophisticated choice for your dining room—it also stimulates hunger, making mealtimes even more satisfying. Look for interesting artwork to transform your dining area into a relaxing yet cultured space. Chez Boris Red, a patterned illustration by Edward Kwong, will make your dining room feel as welcoming as your favorite café. 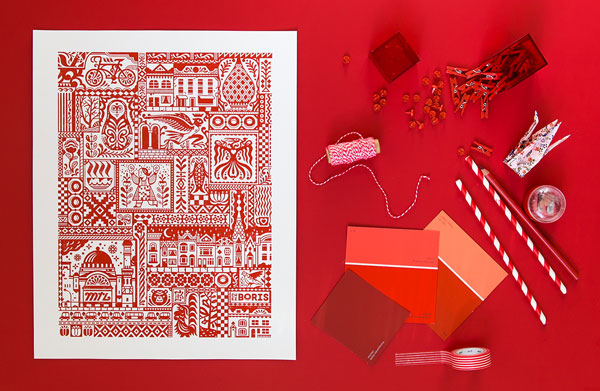 Bring some blue tones into your office or art studio to make it a more productive place to work. The color blue calms and focuses the mind, helping you stay serene through tough days and deadlines. Photography brings the outside world into your work space, like the surreal landscape seen in Free Breakers by Erik Johansson. 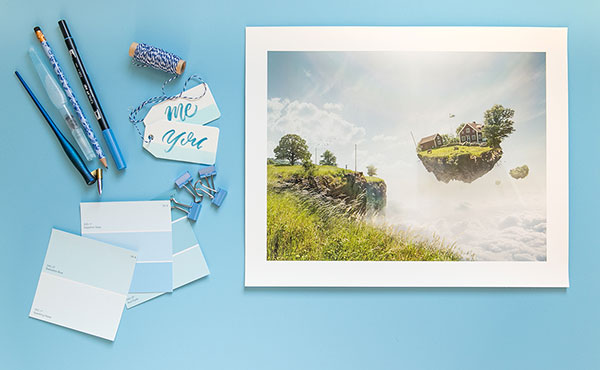 Fresh, tranquil green will make your bedroom a sanctuary of rest and relaxation. A longstanding symbol of health and vitality, green’s soothing properties make it the ideal color for restorative sleep. Include green in your bedroom, and enjoy increased energy and rejuvenation, with foliage prints like Rubber Plant by Erin Lux. 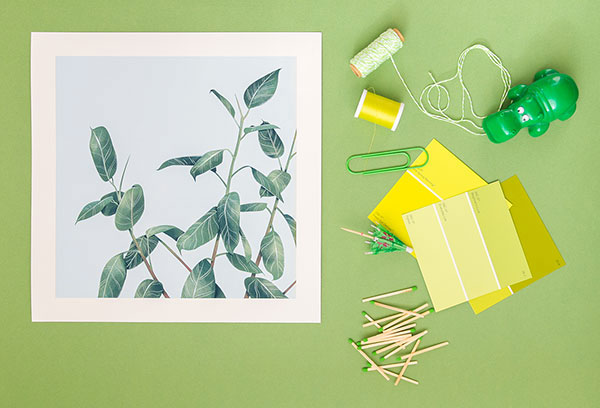 Purple is a positive color for living rooms. Whether you’re having friends over or settling in for a cozy night on your own, decorating your living space with shades of purple can encourage activity and socialization. Dramatic portraits like Prey by Anna Dittmann are the perfect conversation piece and instantly liven up your living room.

For every other room in your home, look for neutral colors like white to round out your personal aesthetic. Select artwork that showcases your personality, makes you think or simply brings a smile to your face. In The Woods by Dadu Shin has a charming minimalist style, telling an compelling story over a clean white background. 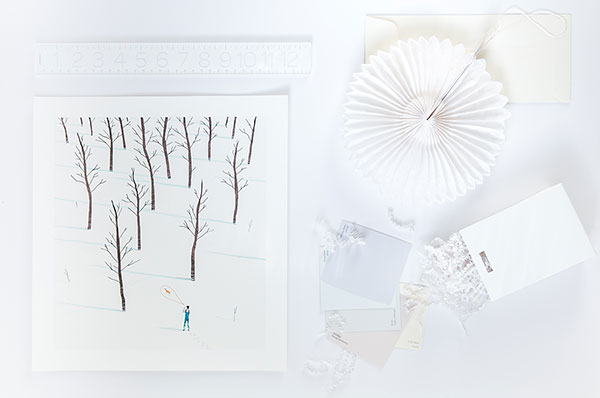 These principles are based on scientific studies and beliefs from ancient cultures. We have presented them here in the spirit of playfulness and inspiration to give you some great ideas for decorating and energizing your home! At INPRNT we have thousands of artists whose work is ready for you to discover and enjoy.

Today we’re thrilled to introduce a brand new product for artist shops! Art cards are custom-printed folded stationery cards crafted to meet the same standard of excellence we already bring to our fine art prints. Using archival-rated paper and ink, we produce each card in-house at our print shop with the same level of care and attention. The paper’s natural white tone and smooth matte finish provide the perfect blank canvas for any work of art, capturing vivid colors and fine details in cards that feel soft and luxurious to the touch.

From the image you select on the front of the card to your handwritten message inside, each art card is a deeply personal communication. They’re the perfect way to say happy birthday, thanks, I love you or just a simple hello. Your friends and family will love receiving one, especially when they see the piece of art you’ve picked out to have printed just for them. Or choose the artwork that says something about who you are—expressing yourself with a unique handcrafted card that makes all of your correspondence feel special.

Your cards will come with envelopes so that they’re ready to drop in the mail or hand to a loved one. Stock up on art cards today and save when you order multiple cards. We hope you will enjoy them as much as we do!

Welcome to the INPRNT blog! We’re really excited to have a new place to share our story and enthusiasm for the arts with you.

Since our founding in 2006, INPRNT has worked to help artists spend more time doing what they love by producing the highest quality art prints from start to finish. We handle the printing, packaging, shipping and customer service with a meticulous attention to detail, treating each piece as if it was our own.

At INPRNT, we are committed to helping artists flourish by combining their creativity with our craft to create works of art you’ll love adding to your collection. We look forward to sharing new and exclusive content on this page, from artist spotlights to special features and the latest INPRNT news. Thanks for joining us and be sure to check back soon!